MARDAN,Mar.7(Gwadar Pro) - The sugarcane growers living in the proximity of Rashakai Special Economic Zone (RSEZ), Khyber Pakhtunkhwa (KP), are optimistic that with the latest Chinese agricultural machinery and with the establishment of SEZ, they can export different products of Jaggery (Gur) to international markets in the near future.

Jaggery, locally known as Gur, is a sweetener made from sugarcane that is unrefined and produced without filtering molasses.

The sugarcanes are crushed in crunchers run by generators; after extracting, the juice is collected and boiled. The concentrated liquid is allowed to cool in a big bowl made of clay; as the concentrated syrup solidifies, it is converted into lumps via hands.

The sugarcane growers use decade-old methods to obtain jaggery, which not only are labor-intensive but also result in pre-and-post labor losses. However, the use of the latest machinery can change the whole scenario. “Jaggery in KP has immense export potential; however, farmers must be equipped with advanced technologies for agriculture,” Irfan Khattak, a sugarcane grower, told Gwadar Pro.

Concentrated liquid is being solidified in a big vessel made of clay. [Photo/Tahir Ali]

Mr. Khattak grows sugarcane in the Lundkhwar area of Mardan. Mostly for making Gur, his family uses tools for making tea and Sharbat (juice), especially in the month of Ramadan. Jaggery in these areas is available in lumps without a definite shape. Gur is usually transported in large-sized sacks of jute.

"We don't have the technology to make our jaggery presentable items in the market," Mr. Khattak said, adding that the farmers need equipment for making proper cubes, slabs, and proper packing materials for them. "Latest Chinese tools and equipment can help us overcome this issue,” he said.

Raza Shah of Charsadda said like other neighboring countries, sugarcane growers of this region can produce different jaggery products like liquid jaggery, jaggery juice, jaggery powder, and jaggery cubes. "However, for doing so, we need tools to shape the jaggery properly and packing and packaging units as well,” he added.

During the second phase of CPEC, besides other areas of collaboration, the agriculture sector has been focused to boost Pakistan’s agriculture-based exports. The sugarcane growers living in proximity with Rashakai SEZ are optimistic that China will not only help them increase the yield of sugarcane but also set up units helping them export their jaggery to different destinations of the world. “Chinese help regarding seeds and technology would be highly appreciated,” said farmer Abdullah. 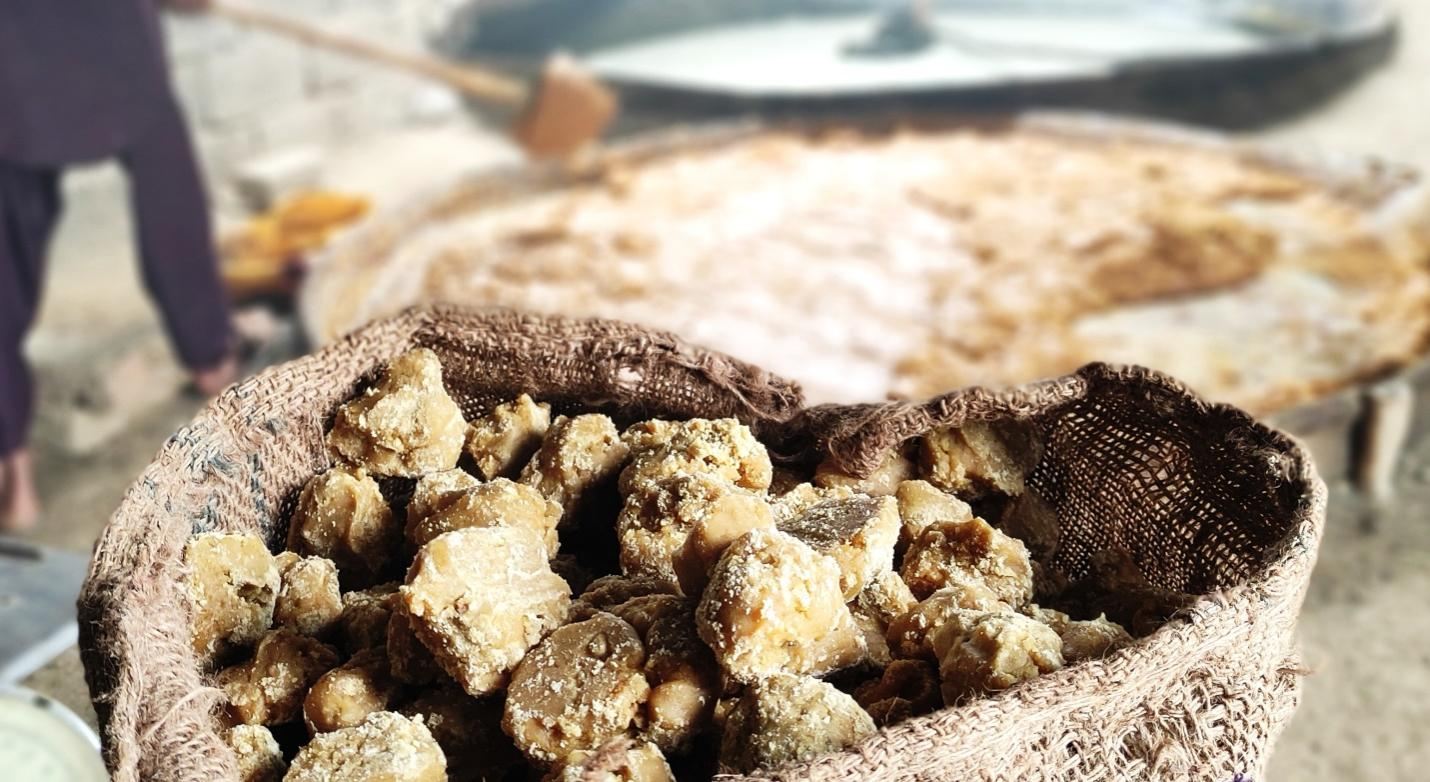 Jaggery is ready for use. [Photo/Tahir Ali]

The jaggery, which is usually found in light golden to dark brown color with rich fiber, has great medicinal value, and day by day its demand is increasing worldwide. It has been used in foods and beverages, bakery products, confectionery, organic health products, and natural dyeing of fabrics as well. If Pakistan starts producing quality jaggery products, China can be one of the top destinations for Pakistani exporters.

In a recent interview, Abdul Karim Tordher, Special Assistant to CMPK on Industries had told Gwadar Pro that in the priority the government would provide space to industries and food processing units that process local raw material.