Thar Million Tree Program a miracle in the desert

THAR, Jan. 20 (Gwadar Pro) - Near the Thar Block-II integrated mine-power project located in the Thar desert, a million trees and shrubs are striving to grow their roots underground deeply to store water and survive in the harsh arid environment, showing a kind of enduring resilience and vitality, and bringing a ray of hope to the people and creatures living here.

This is a desert garden of 100 acres created by Thar Block-II integrated mine-power project under the Thar Million Tree Program in 2017 and has been expanding since then. The annual carbon dioxide reduction from the plants is about 600 tons per year.

It’s hard to maintain a garden in the desert, and even harder to do so near a coalfield, but the team of the project has made it with tenacious efforts and a spirit of endurance.

The area where Thar coalfield is located has a subtropical desert climate, featured with little to no rainfall and generally hot temperatures year-round. The Chinese constructors who first arrived here were ‘greeted’ by nothing but sand and dust all over the sky. They had to live in makeshift homes made from containers, obtain water from deep wells dug by themselves and face load-shedding from time to time.

Things have changed a lot now. With 6 years of devotion to tree planting in the desert, the landscape in this area has been transformed significantly. Seven types of desert plants, such as Rhodes Grass, Aloe vera, and Pennicum had been planted year by year, starting from one tree to a patch of plants to the sea of green. “Due to the harsh and arid environment here, we need to set up seeding room first to cultivate saplings, and then transplant them outdoors after irrigation,” Liu Zhe, commercial manager of CMEC Pakistan Engineering (Pvt) Ltd told Gwadar Pro.

Adopting this method, the team had also developed an ecological garden (50 acres), a green park (65 acres), an olive forest (10 acres), and a jujube orchard. The vast area of plants brushes the barren land with a refreshing green, distinguishing it from other places in the Thar desert. 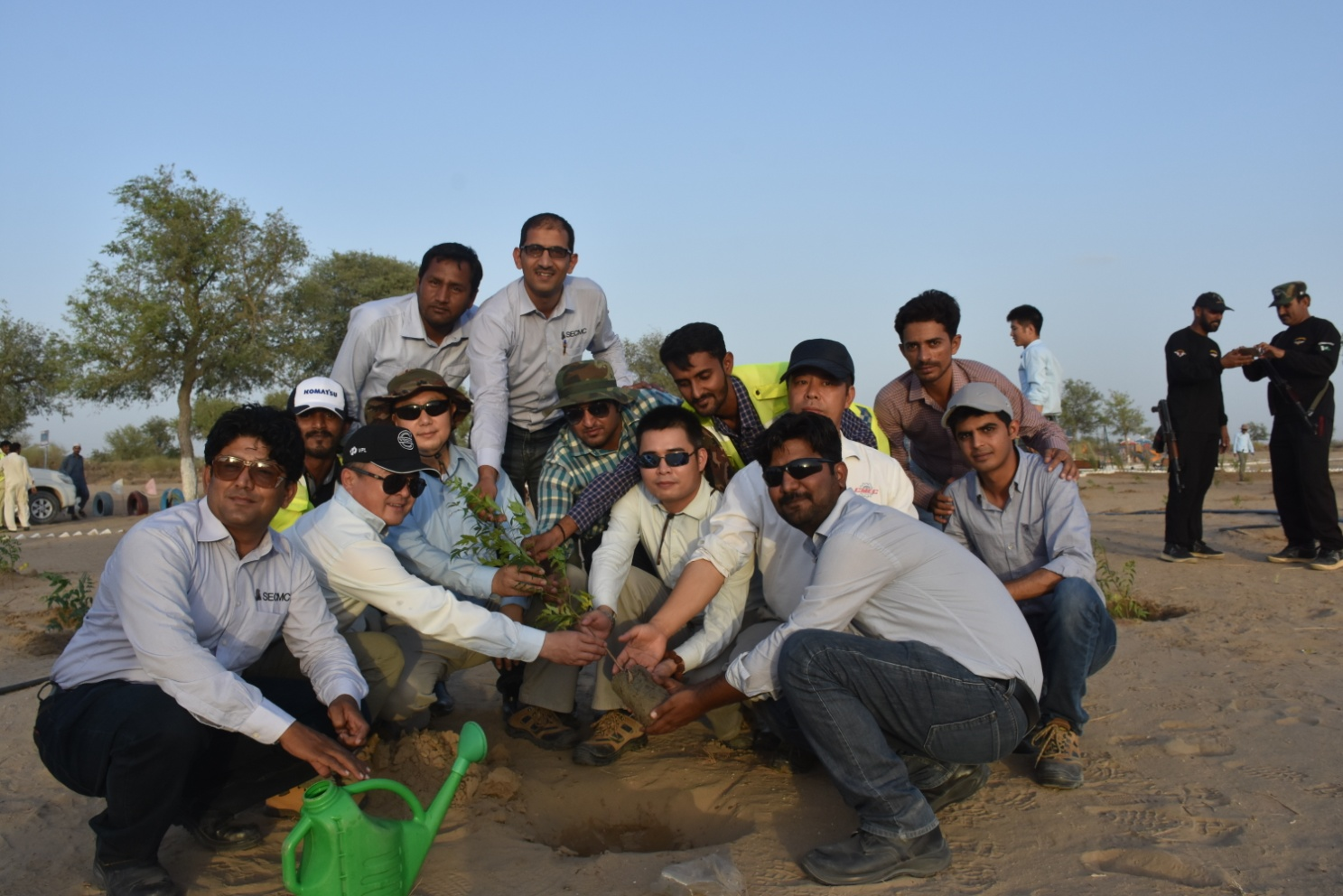 “Villagers are very glad to see the green land in the desert and have been using the leaves of these trees as fodder for their animals,” Liu said.

Apart from the efforts of reforestation in Thar, the team had built a reservoir to gather drainage from the mine pit, which would otherwise be wasted in most mining projects. The drainage, mostly saline-alkali water, is pumped from the second and third aquifers, usually 120m and 180m below the surface, and then transmitted to the Gorano reservoir through a pipeline.

The creation of Gorano Reservoir also led to the formation of a unique saltwater wetland, which has attracted migratory birds and became a habitat for more than a dozen bird species, enhancing the biodiversity of the area. In addition, nearly 100,000 fish roe have been released into the Gorano reservoir, and varieties of fish can be found here. By far, more than 12,000 kilograms of fish have been distributed to 1,500 local families. 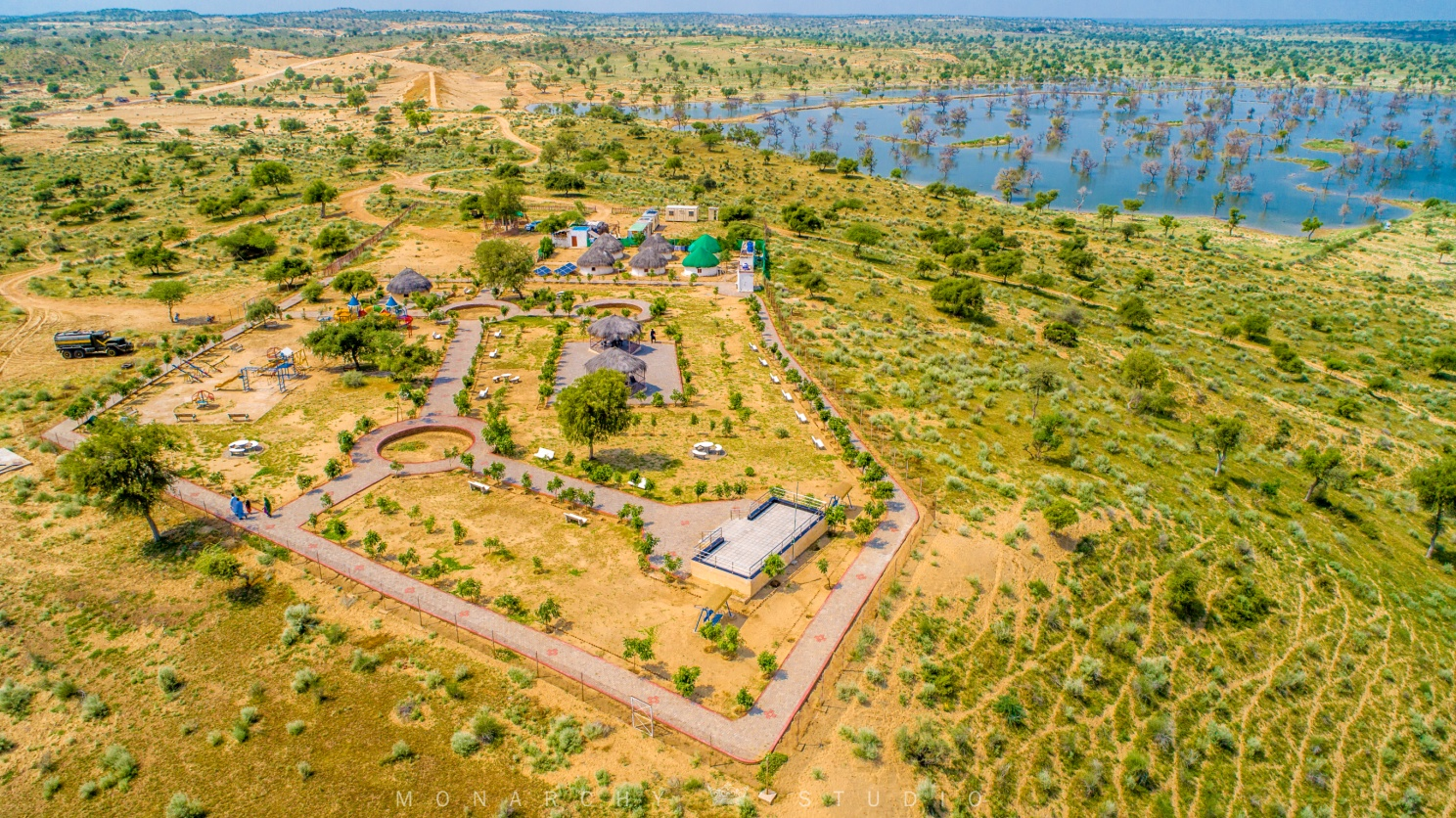 People are prone to the narrative that coal mining and coal-fired power plants can cause serious pollution to the environment. However, the latest integrated mine-power projects represented by the Thar project have already proven to be clean and green through the application of advanced technologies.

According to Liu, the project team optimized the design plan in the first place and adhered to the concept of "green and sustainable" throughout the whole process. The emission standards of mining, transportation and other auxiliary equipment are all higher than Pakistan's environmental protection requirements.

Besides, the team strictly abides by the boundaries of the construction area to avoid any impact on the lives of local people and the ecological environment. A third party will regularly test the air, water and toxic substances to ensure all indicators meet environmental standards. Waste oil products, filter elements and other production and household waste will be sorted and transported in a unified manner to avoid pollution in the Thar Desert.

China has pursued green development and advocated building a green Silk Road. In June 2021, China and 28 other countries launched the Initiative for Belt and Road Partnership on Green Development, calling on all countries to join forces to promote green, low-carbon and sustainable development. As a leading Chinese enterprise in the infrastructure sector, CMEC is set to work with its Pakistani counterpart to practice the Green Development of BRI now and in the future.