SHANGHAI, Nov. 18, (Gwadar Pro) – Pakistani businessman Habib ur Rehman and his exquisite Pakistani handicrafts have always been a beautiful sight in Shanghai's Hongmei Road Shop, a haven for foreign businessmen.

Habib, 32, has lived in China for 14 years. He enjoyed crosstalk, a Chinese type of comedy, and the charisma of Shanghai with friends from all over the world while attending Shanghai University of Finance and Economics. He came to Shanghai with his father, who had a business there, and fell in love with the city's culture. He was determined to continue on his father's career because he loved the city.
The three brothers’ entrepreneurial journey in Shanghai 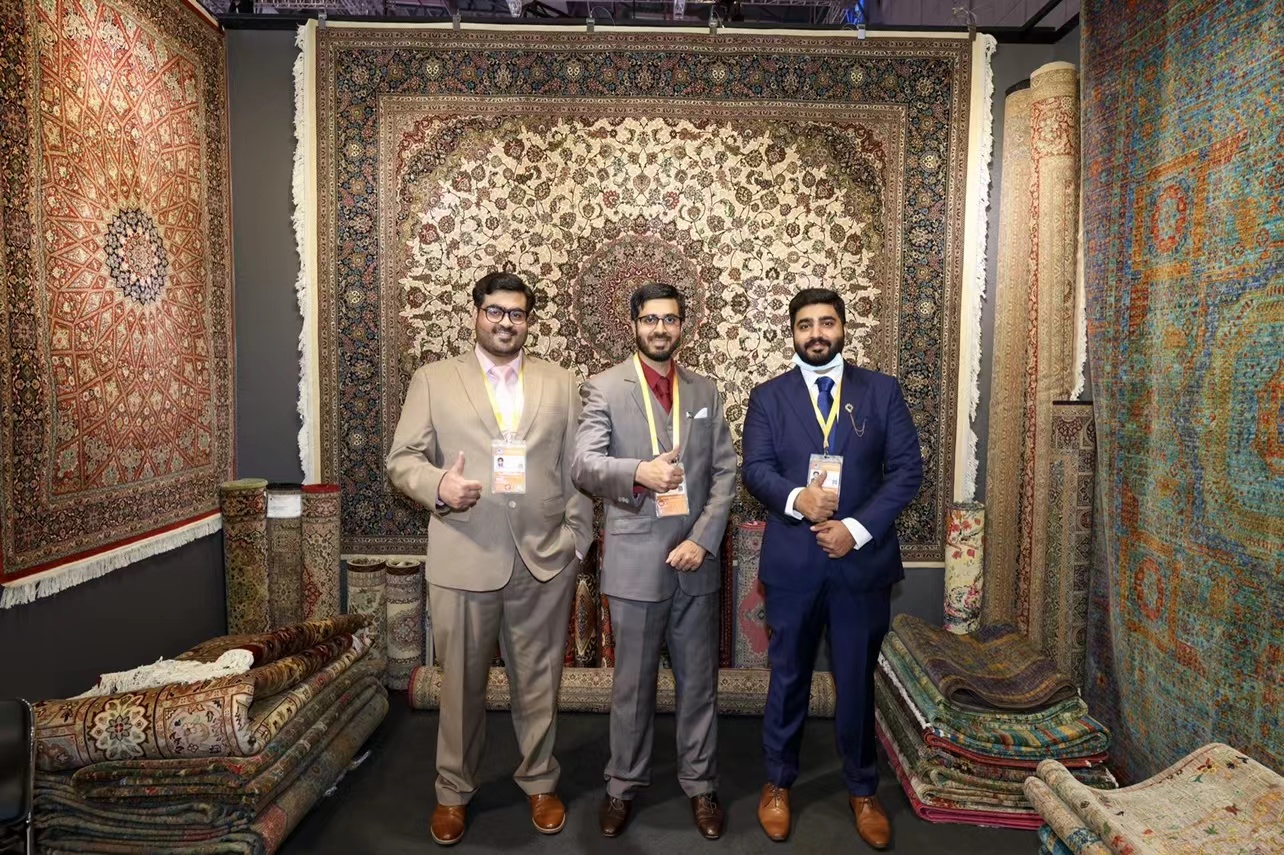 Habib (middle) and his brothers at their carpet booth in Shanghai
Shahid Sohail, the father of Habib, arrived in China in 2001 and made Shanghai his home in 2003. The first major obstacle he faced was the language barrier. However, he continued to working hard, and in 2006, he launched his first shop on Shanghai's Hongmei Road, demonstrating the success of his efforts.

Another challenge is promoting products made in Pakistan. In 2008 and 2009, Habib and his brother Mian Muhammad Zubair came to Shanghai. They helped their father take part in several exhibitions during their free time at university. "Our ability to translate has significantly increased. At the same time, we also gained a solid understanding of China's business culture and the country’s customer environment".

Following graduation, the two brothers set out to raise awareness of Pakistani products through museum exhibitions and art and culture fairs. In 2016, they were joined by their younger brother, who suggested introducing more Pakistani handicrafts to China. "Every year, we send two shipments to China. In 2019, we opened a new store on Weihai Road in downtown Shanghai. We have high hopes for expanding our business." Habib said.

Due to the outbreak of COVID-19, for eight months, Habib and his family was stranded in Pakistan, unable to return to China. The business environment was difficult amid the pandemic. They, on the other hand, believed in the potential of the Chinese market and never gave up.

"We had a huge success in the 2021 China International Import Expo in Shanghai. One container of salt lamps was sold in just five days, and three containers were sold over the next three months. Two more shipments entered China in 2021 and 2022. The Pakistani Consulate also granted us legal permission to manage the Pakistan Pavilion, a long-standing commercial platform. This is a huge accomplishment for any Pakistani." Habib said proudly.

Now Habib and his brothers have offline and online stores where Chinese people can also buy handicrafts and home decorations from Pakistan. Their next step is to introduce Pakistani food to the Chinese market.

Introducing the positive energy of Pakistan to Shanghai 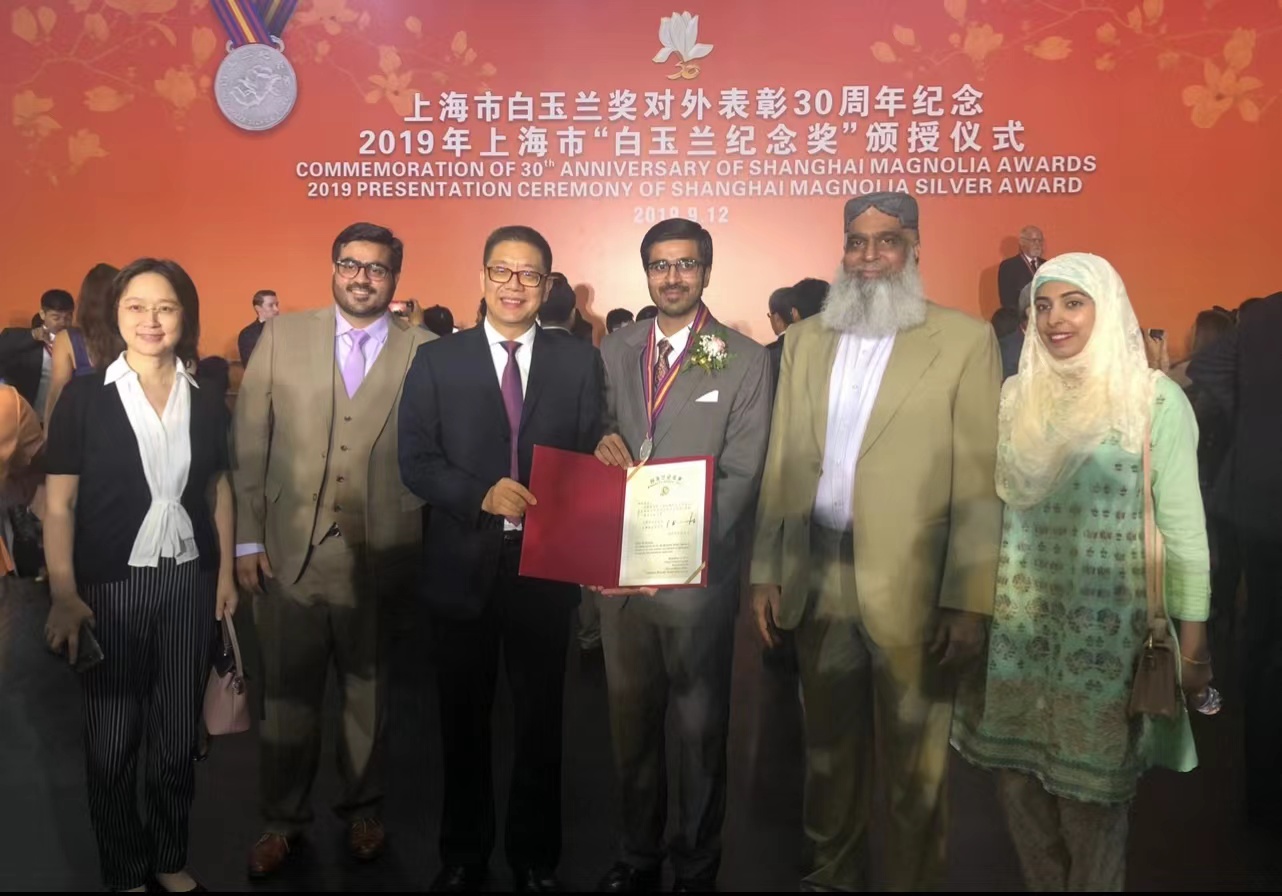 Habib was awarded the Magnolia Silver Award in 2019

"As you can see, the pattern on this carpet is really lifelike, and it is very delicate. You can feel them with your hands; if kept properly, a carpet like this can last for hundreds of years.” As usual, Habib was enthusiastically promoting carpets made in Pakistan to consumers. "My goal is not just to sell the products, but to raise the recognition of Pakistani handicrafts." he explained to the reporter.

What Habib enjoys the most in his spare time is volunteer work in addition to promoting Pakistani products. To him, giving back is a way of life and a sincere pursuit of worth.

Especially during the fight against the epidemic in Shanghai in the first half of this year, he volunteered to join the anti-epidemic team and was well received by the local police and residents. The locals are moved by the kindness and integrity of the young Pakistani man.

"Taking part in various volunteer services assisted me in breaking down the ‘invisible wall’ between foreigners and locals. It was as if we had become relatives and friends. Now that my family is all in Shanghai, they love it here and will join me in advocating for Pakistan," he concluded.