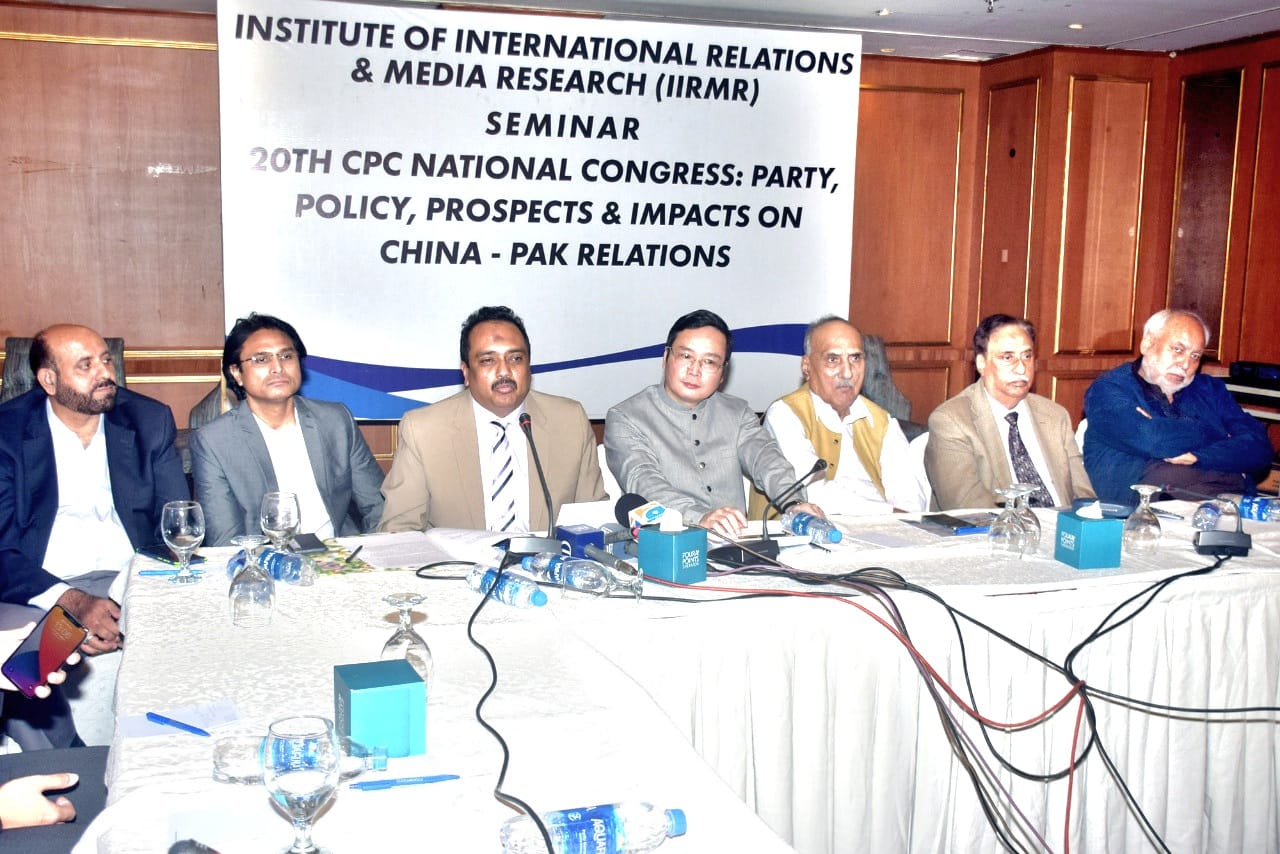 LAHORE, Nov. 14 (Gwadar Pro)-A first of its kind gathering of Pakistani scholars and Chinese diplomats jointly subscribed to the outcomes of the recently-concluded 20th National Congress of the Communist Party of China (CPC) on a seminar organized by Institute of International Relations and Media Research (IIRMR) on Sunday.

They underlined the need to tap new diversity into Pak-China relations as well as CPEC and hailed the induction of new corridors including health corridor, industrial corridor, digital corridor, and green corridor.

Shedding light on new opportunities while discussing the impacts of the 20th CPC National Congress on Pak-China relations, Chinese Consul General Lahore Zhao Shiren said that the people of Pakistan are real stakeholders besides the government and Chinese leadership is ready to work jointly with every segment of society to let CPEC fortunes trickle down to grass route level.

Mr. Zhao stressed that 2023 is to be marked as a year of China-Pakistan Year of Tourism and Exchange. The Gandhara Art Exhibition will be held at the Palace Museum in Beijing to showcase Pakistan’s diverse culture and long history of interaction with China.

With the gradual resumption of direct flight operation with more frequency, people-to-people exchanges between the two countries will become more active, he added.

As the 20th CPC National Congress reaffirmed the commitments of the Party and the country to world peace and common development, with dedication to promoting a community with a shared future for mankind, the Chinese Consul General said that CPEC is going to be more mature and multi-dimensional after the introduction of new concepts like health corridor, industrial corridor, digital corridor, and green corridor in the next phase.

“During the PM’s visit, both sides issued a joint statement and signed or concluded several agreements/MoUs in wide areas. Leaders of the two countries reached an important consensus on the ML-1 project for its early implementation. China also agreed to actively advance the Karachi Circular Railway and encourage Chinese companies to participate in solar and other renewable energy projects,” he added.

“Pakistan should understand well that the importance of CPEC should be reflected in foreign and economic policies. Therefore, Pakistan should have a permanent definite policy regarding CPEC, just as Pakistan has a permanent definite policy regarding friendship with China, and whatever political changes may take place in Pakistan in the future, there should be no negative impact on this project,” he said.

IIRMR President Yasir Habib Khan urged for early implantation of using RMB for trading transaction between Pakistan and China that will open a brand new chapter of tenacious and resilient economic trajectory between both countries.