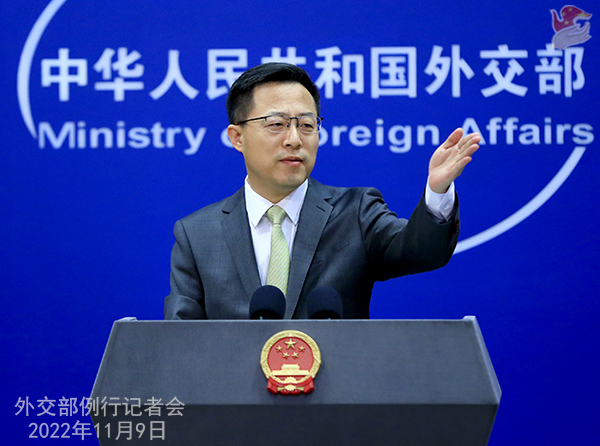 Zhao Lijian, a spokesperson of the Chinese foreign ministry, delivers at a regular press conference in Beijing, capital of China, on November 9,2022. [Photo by MFA]

BEIJING, Nov.10 (Gwadar Pro) – “We urge developed countries to earnestly step up to their historical responsibilities and fulfill their due international obligations. In particular, they should deliver on their promise of mobilizing $100 billion per year for climate action in developing countries as soon as possible,” said the Chinese Foreign Ministry Spokesperson Zhao Lijian on Wednesday’s routine press conference.

Zhao made the remarks in response to the report commissioned by the COP26 and COP27 climate summit hosts released on November 8 which said that developing countries need investments well beyond $2 trillion annually to stop global warming and cope with its effects.

He added that developed countries should offer a roadmap for doubling adaptation finance, and take credible steps to help developing countries improve climate resilience, enhance mutual trust between the North and the South and form greater synergy in actions.

In climate response, he further said that China is a country that walks the walk. “We have actively implemented the national climate change strategy, and unswervingly pursued a green and low-carbon path of development that prioritizes ecological protection,” he said.

Zhao said that since China announced the ambitious goals of carbon peaking and carbon neutrality, notable progress has been made in that direction, and he gave some figures.

From 2012 to 2021, China supported an average annual economic growth rate of 6.6 percent with an annual energy consumption growth rate of 3 percent; its carbon dioxide emissions per unit of GDP dropped by about 34.4 percent, and its energy intensity fell by 26.4 percent, achieving a cumulative saving of 1.4 billion tonnes of standard coal.

In July, 2021, China formally launched the national carbon emission trading market which covers about 4.5 billion tonnes of carbon dioxide emissions per annum, making it the biggest of its kind in the world.

Zhao stated that at the just concluded 20th National Congress of the Communist Party of China, important plans were laid out for fulfilling the dual carbon goals. “China will continue to work with other parties to play an active role in global climate governance and jointly respond to the challenge of climate change,” he concluded.

As of Tuesday, the devastating floods in Pakistan has caused 1,739 deaths, 12,867 injured, and 33 million displaced, according to the National Disaster Management Authority (NDMA) .