Can Glasgow’s unfulfilled climate justice be served in Egypt?

More than 1,700 deaths, 8 million displaced people, 44,000 square miles of submerged land, and a whopping $40 billion economic loss...... For the rest of the world, these are just numbers they come across as they browse the news, but for flood-trapped Pakistan, they speak of great agony.

Pakistan's "biblical" floods have dominated social media for months, but it seems that the cause of this disaster is more “man-made” than “natural”, except that the victims were not the culprit.

Starting in June, the floods had reared its head at the beginning of the year. In March the average daytime temperature in some parts of Pakistan registered 5-8°C higher than the average for the same period in previous years, leading to a year "without spring" for the first time.

Temperature change in the country has been brewing for years. As per a recent report Climate Change in Pakistan (hereinafter referred to as "the Report") by the Pakistani securities agency KASB, the average temperature in Pakistan in 2018 reached 21.87°C, a 2.5°C increase in nearly seven decades.

Rising temperatures have led to an outburst of melting glaciers in Pakistan's northern mountains, creating more than 3,000 dammed lakes overnight, like more than 3,000 time bombs hanging over the entire country. Once they collapse, millions of cubic metres of water will fatally rush down from the mountains. The calamities are made inevitable by a disruptive rainy season due to climate anomaly. According to the World Weather Attribution, monsoon rains from June to August are 50% more intense than it would have been had the climate not warmed by 1.2℃. Citing data from Pakistan's National Disaster Management Authority, the Report says that his year's monsoon rains were 2.87 times the country's 30-year average of 134 millimetres and more than five times that in some provinces, so nature has finally shown its fangs.

The anomalous climate is the main cause of floods, and such "anomalies" have become the norm for Pakistan's climate in recent years. According to the Report, between 1900 and 2020, drought, extreme heat, floods and heavy rains caused 143, 2954, 18,105 and 12,141 deaths, respectively, with total economic losses of $24.5 billion, while this year's floods have caused a whopping $40 billion economic loss, or about 1/10 of Pakistan's annual GDP. Bearing dear, unwarranted costs, Pakistan has been made a scapegoat for the calamity.

Climate anomalies are not unique to Pakistan, and abnormal atmospheric circulation caused by global warming has made the Indian Ocean the frontline of this "climate war", with La Niña and El Niño cases growing year by year. Climate change has led to more frequent floods in Pakistan, heat waves in India, and abnormal wetness in East Africa. Increased climate change is bringing enormous natural disasters to the world, but developing countries bear a bigger brunt for one simple reason: emerging countries, mostly in the tropics, have historically emitted little to no greenhouse gases.

Terming the climate crisis a "case study in moral and economic justice", UN Secretary-General António Guterres argued that "polluters must pay". The "polluters" in question are self-evident as developed countries, with only 20 % of the world's population, consume 75 % of cumulative global emissions.

According to the Report, historical greenhouse gas emissions in developed countries far exceed those in developing countries. International Energy Agency (IEA) data show that from 1971 to 2020, in the energy sector, the G7 cumulative greenhouse gas emissions account for 34.5% of the world's total emissions. The U.S. alone accounts for 20% of the world's total cumulative emissions, nearly 56 times that of Pakistan. The South Asian country accounts for less than 1% of global carbon emissions, yet one of the 10 most vulnerable countries to climate change.

The U.S. is the world's leading emitter of greenhouse gases. In 2020, per capita CO2 emissions in the United States reached 12.9 tons, three times the world average of 4.08 tons and 17 times that of Pakistan. 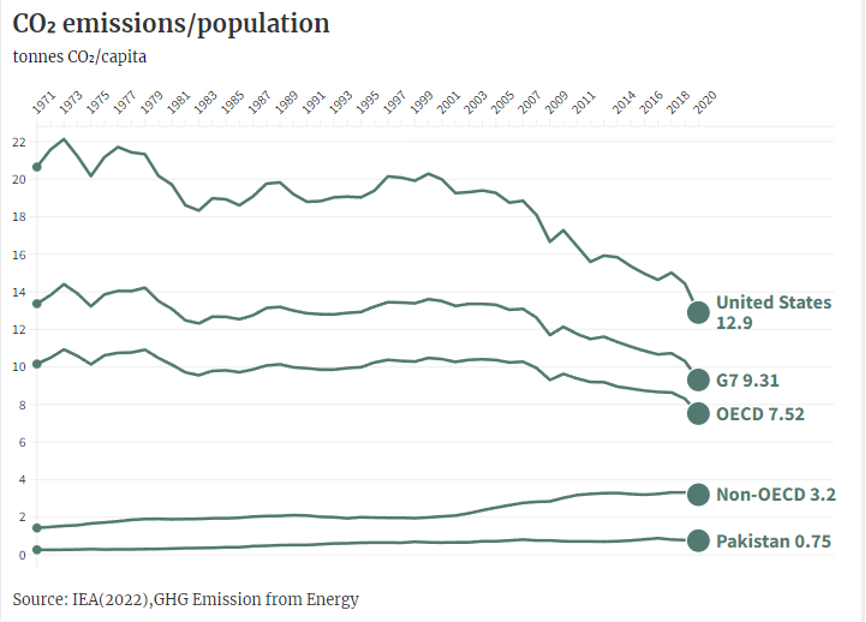 Per capita carbon emissions in G7 countries are nearly 13 times higher than Pakistan's.

The UN has set a goal of holding the global average temperature increase to well below 1.5 degrees Celsius. Greenhouse gas emissions from human activities have led to a global temperature rise of about 1.1 degrees Celsius, which is not far away from the deadline of 1.5. If humanity fails to pull back before it is too late, neither developed nor developing countries will be spared. However, the Global North definitely have a stronger hand to pull the reins on the brink of the cliff.

There are a thousand reasons to retreat, but there is only one way forward. Although developed countries have begun to increase the proportion of new energy and technological investment in recent years, the reality is cruel. The rebound in economic activity following the COVID-19 has led to a 4% increase in global energy demand, mostly met by fossil fuels. Global carbon dioxide emissions from energy combustion and industrial processes in 2021 reached a record high of 363 billion tonnes. Among which, coal accounts for more than 40% of the total increase in global carbon dioxide emissions. In the wake of the Russia-Ukraine conflict, Europe is in an energy crisis and many European countries are back on the coal power path.

According to the IEA, annual generation of global solar PV capacity will need to quadruple by 2030 to keep pace with the IEA's efforts to reduce carbon emissions. Notably, China is a major investor in solar energy. However, the recent suppression of photovoltaic products in Xinjiang and other regions could be detrimental to global climate governance.

As one of the vulnerable countries to global warming, Pakistan has a strong will to change its energy mix. In addition to its ambitious push for electric vehicles, Pakistan has set a target of reducing its greenhouse gas emissions by 30% from 2008 levels of 147.8 million tonnes by 2025.

Although Pakistan does not have abundant fossil energy reserves, its sufficient solar energy and hydroelectric power can support the country to realize carbon neutrality as soon as possible. It is arguably possible for Pakistan to transform its energy mix with the help of overseas technology and capital.

Now it comes to the question, where can they get the money?

Under the Paris Agreement, all countries agreed to address "loss and damage associated with climate change," yet wealthy countries have consistently refused to provide funding, particularly against calling it ‘debt’.

At the Copenhagen Climate Change Conference in 2009, rich nations promised to channel USD 100 billion a year to less wealthy nations by 2020, to help them adapt to climate change and mitigate further temperature rises.

However, the year 2022 is about to end, and this promise is still far from being fulfilled. Even the statement issued following the recent BRICS Summit specifically stated that “COP27 should prioritize implementation and highlight the reinforcement of adaptation and the delivery and urgency of developed countries' commitments to provide credible, adequate, predictable, timely, new and additional financial support and technology transfer to developing countries.” Antonio Guterres chastised the Group of Seven (G7) countries for failing to deliver their $100 billion commitment, stating that there is "a certain degree of mistrust" of this goal.

China has made significant progress in reducing emissions as a developing country in recent years. Climate cooperation between China and Pakistan has emerged as a key topic in the second phase of CPEC.

The China Pakistan joint statement issued on November 3 stated that “The Chinese side appreciates the efforts of the Pakistani government to vigorously develop renewable energy projects including solar projects which aligns with the green, low carbon and environmental development of energy sector, and encourages participation of Chinese companies in this Pakistani endeavor.”

The energy sector was one of the areas with the most investment, the fastest progress, and the most remarkable achievements in the China Pakistan Economic Corridor from the beginning.

The Karot Hydropower Project, a CPEC project completed in July this year, has the capacity to generate 3.2 billion kilowatt-hours of clean power per year. China’s Elion Resources Group has established a China Pakistan ecological demonstration zone in Pakistan to demonstrate desertification control, based on the successful implementation of the Kabuki model in China.

China has the largest installed solar power capacity in the world, making up over 68% of the total. Through CPEC, China can provide Pakistan with financial and technological assistance.

Chief executive of Alternative Energy Development Board (AEDB), Shah Jahan Mirza told China Economic Net that, “Pakistan's goal is to produce 10,000 megawatts of renewable energy, which will require $6 billion in investment. Chinese companies and banks are best suited to fund these projects because they have previously worked on various power projects in Pakistan.”

As more urban bus routes in Pakistan are kitted with Chinese electric vehicles, the country will gradually move towards "green transportation."

For Whom the Bell Tolls

As floods receded, farmers in Pakistan are searching for their homes under mud and debris, waiting for their land to be cultivable again. Although the country has received financial and material assistance from many countries and international organizations, its Prime Minister Shehbaz Sharif would prefer a solid promise from the Global North at the United Nations Climate Conference (COP27) in Sharm El-Sheikh, Egypt—a promise that should have been fulfilled long ago.

According to the International Energy Agency, the soaring energy prices in the context of the Russia-Ukraine conflict have boosted the world's investment in renewable energy. By 2030, global investment in clean energy will have increased by more than 50% from its current level to $2 trillion per year. Global carbon dioxide emissions will gradually decrease from a high of 37 billion tons per year to 32 billion tons by 2050. However, achieving these goals will necessitate the combined efforts of the entire planet.

Currently, developed countries are avoiding their obligations to provide funds, technologies, and capacity building, making it impossible to fully implement the Paris Agreement. On top of that, some developed countries are attempting to use the new market mechanism to undermine the Paris Agreement's core principle of "common but differentiated responsibilities," thereby depriving developing countries of their right to development. It will only add fuel to the global environmental crisis.

Global action is required to combat climate change. No country can handle it alone or avoid responsibility. In these circumstances, the international community must protect "climate justice" and assist developing countries.

Four hundred years ago, John Donne, the English poet, foresaw the difficulties that humanity would face together in the future, he wept in his poetry:

“Any man's death diminishes me,

because I am involved in mankind,

and therefore never send to know for whom the bells tolls;

it tolls for thee.”