Report calling for Climate Justice ahead of COP27

As of yesterday, the devastating floods in Pakistan has caused 1,739 deaths, 12,867 injured, and 33 million displaced, offering a most prominent example of the massive humanitarian costs the Global South is paying for the high carbon emissions of the North.

“The people of Pakistan are the victims of a grim calculus of climate injustice. Pakistan is responsible for less than 1 per cent of global greenhouse gas emissions, yet it is paying a supersized price for manmade climate change”, noted UN Secretary-general Guterres on the General Assembly.

Total cumulative emissions from US nearly 56x those from Pakistan. Source: IEA

Worse still, the economic rebound after Covid-19 led to the highest-ever level of emissions from power plants and coal consumption, pushing the CO2 emission level to an all-time high.

Since the developed nations have taken the advantage of “taking first steps on the development ladder”, the report appeals that these countries should take greater responsibility in tackling climate change.

“With 2022 already set to become one of 10 warmest years on record, there is a dire need of increased technical and financial support to combat climate change”, the report stressed.

According to the UN Adaption Gap Report, the estimated climate adaption cost was found to be 5-10 times higher than the present public adaption finance flows. The world expects the US and EU to deliver on the $100 billion climate finance commitment to developing countries and take the lead in emissions reduction to ensure the right to development of developing countries.

In addition, fair and reasonable reduction in emission standards should be put in place. The US President Biden has set a 50-52% reduction target in carbon emissions by 2030 from levels witnessed in 2005. But as per Emission Database for Global Atmospheric Research (EDGAR), even a 50% reduction suggests the US’s per capita emissions in 2030 would be nearly 2.2x the current world average.

US per capital GHG emissions from energy outpaced Pakistan by 17x. Source: IEA

“Climate Justice”, therefore, is what Pakistan is making case for at COP27 to be held in Egypt from 6 to 18 this month, expecting “no sidelining of these pressing matters”.

"If Pakistan emits less than 1% that causes the warming that triggers such shocks, why is assistance cast in a 'disaster aid' or 'begging bowl' basket? It should not. Right now, there is no real basket of accessible funds for climate resilient recovery, let alone disaster assistance. Since both are triggered by climate impacts, the economic buffer for countries already in debt stress should be clearly appropriated and disbursed as climate funds that are easy to access", Pakistani climate minister Sherry Rehman once said in an interview.

Pakistan has been pouring efforts to tackle the tremendous challenge together with the international community.

“We think China’s solutions to climate change are more feasible for countries such as Pakistan. China’s status as a developing nation allows it to relate to the realities of other developing countries and formulate a more suitable and effective plan for tackling climate change”, the report says. 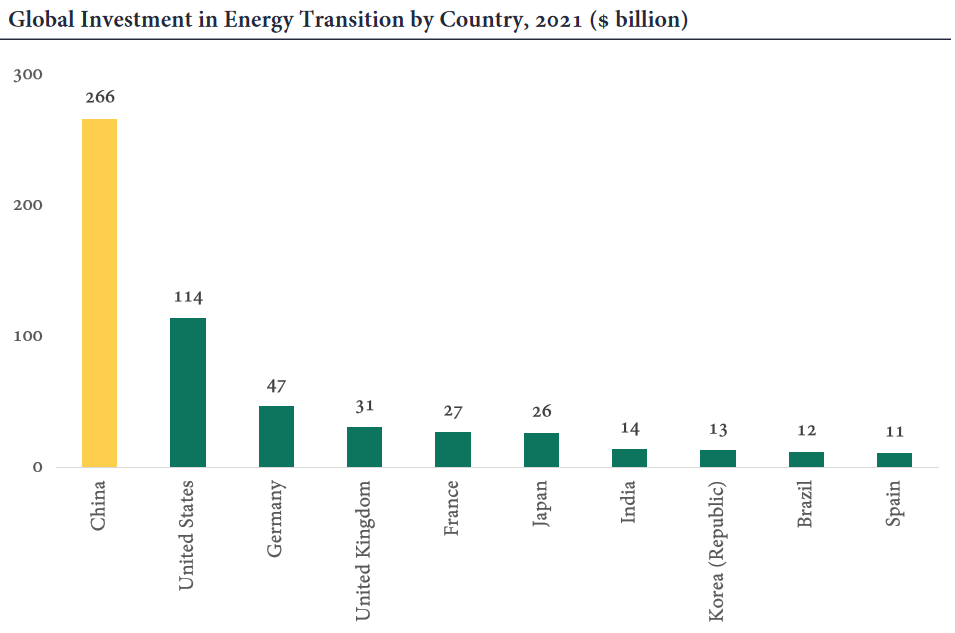 China is the largest investor in energy transition in 2021. Source: KASB

According to a recent report, a Green Corridor will be launched jointly with China to focus on agricultural environment, food security, and green development, which is part of the two brother countries’ collaboration towards a green future.

In the power sector, the largest carbon emitting source in Pakistan, ambitious steps have been taken. The Alternative Energy Development Board (AEDB) has unveils policy for 10,000 MW solar PV energy initiative, which, according to CEO AEDB, would require $6bn investment.

“Chinese companies and banks are best suited to finance these projects as they have already been working in Pakistan for various Power Projects”, he mentioned in an interview.

By 2030, Pakistan aims for an overwhelming share of renewables in its installed capacity

On the other side, China is encouraging the participation of Chinese companies in Pakistan's endeavor for green, low carbon and environment-friendly development, as has been confirmed in the Joint Statement between China and Pakistan released yesterday during PM Shehbaz Sharif’s state visit to China.

The Joint Statement further says, “Appreciating Pakistan’s initiative to combat human-induced climate change and China’s initiative to promote green cooperation under the Belt and Road Initiative, the two sides agreed to step up cooperation in such areas as ecosystem restoration and water resource management”.