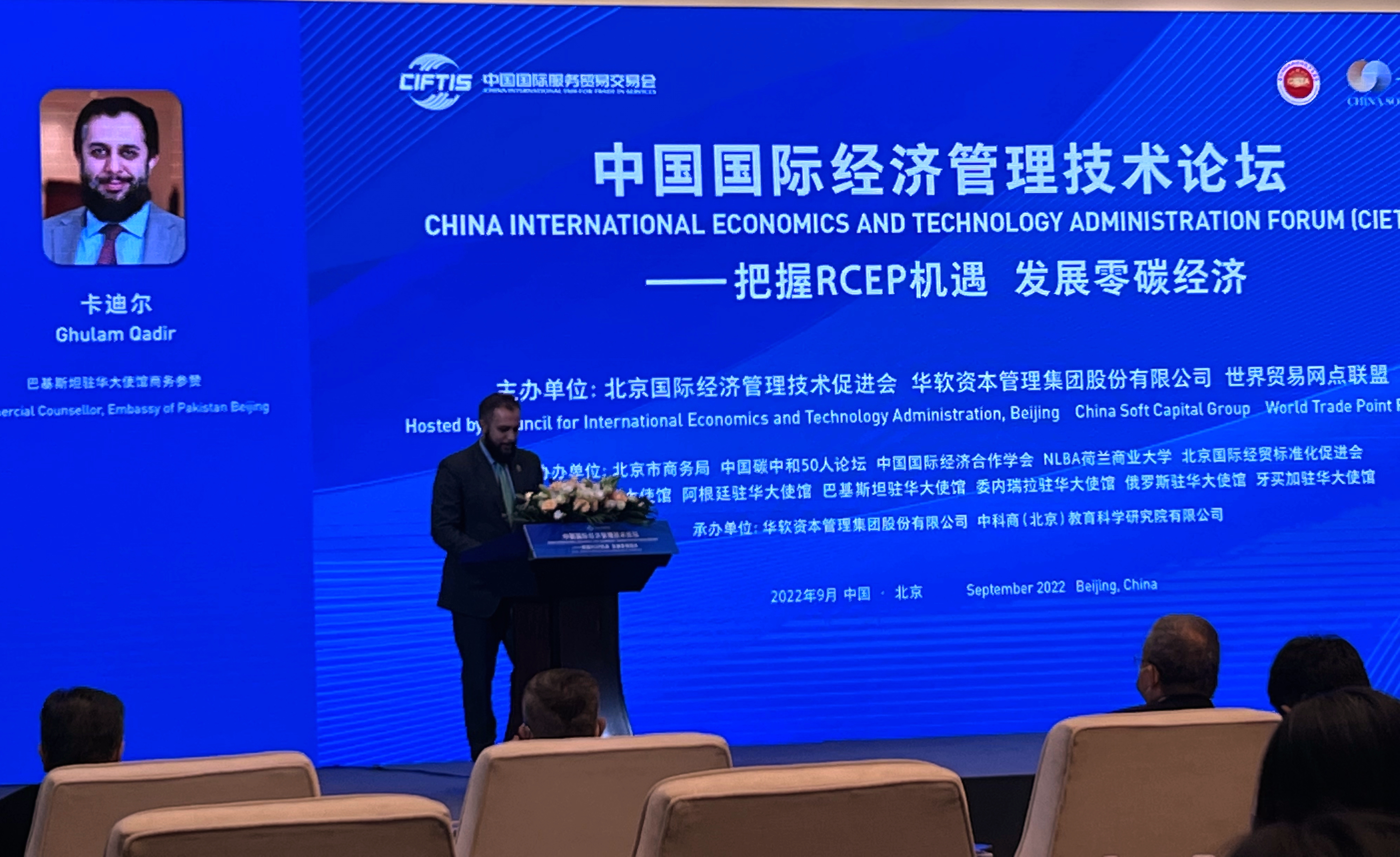 Pakistan entered into a much more elaborate Phase-II of the China Pakistan Free Trade Agreement where over 90% of exports face no tariff, he told audiences while addressing a seminar titled “China International Economics and Technology Administration Forum (CIETAF), at the National Convention Center.

“Pakistan is looking to connect FTA into a comprehensive economic partnership with China and other countries including services, technology transfer, and industrialization cooperation, this is a great step for Pakistan and we feel encouraged to enter into larger regional agreements like ASEAN and RCEP”, he mentioned.

He further said that Pakistan’s Prime Minister, Mian Muhammad Shehbaz Sharif announced recently a comprehensive plan to generate 10,000 MW of solar power named the National Solar Energy Initiative aimed at substituting costly energy with competitive solar power, which will provide massive relief to people, further help industrialization and economic well-being of Pakistan. He added that this initiative represents a landmark opportunity for the Chinese as well as regional friends.

“We feel that our transformation into RCEP has been made easier by Belt and Road Initiative (BRI) and China Pakistan Economic Corridor (CPEC) initiative which is giving Pakistan the economic and industrial proves to become part of the regional value chain” Qadir added.

He stated that Pakistan currently has three FTAs with RCEP countries including China, Malaysia, and Indonesia. Whereas Japan, Australia, and New Zealand have given Pakistan preferential access under the GSP schemes.

“The Government of Pakistan under Strategic Trade Policy Framework 2020-25 is committed to forging a way forward to integrate with RCEP. Currently, Pakistan is a sectoral dialogue partner of ASEAN and the Pakistan Foreign Minister visited ASEAN countries and China recently in a bid to expedite Pakistan’s membership with ASEAN and RCEP, Thank you China”, he told the audience.

He further talked about the impacts of the climate affecting Pakistan recently in the shape of the flood.

Ghulam Qadir thanked China for timely support during the flood and told that 5,000 kilometers of road and bridges have been destroyed and 45% of cropland has been washed away.

It is to be noted that the 2022 China International Fair for Trade in Services (CIFTIS) is being held between August 31 to Sept 5 at the venues of the China National Convention Center and Shougang Park in Beijing.