Trapped in US Dollars 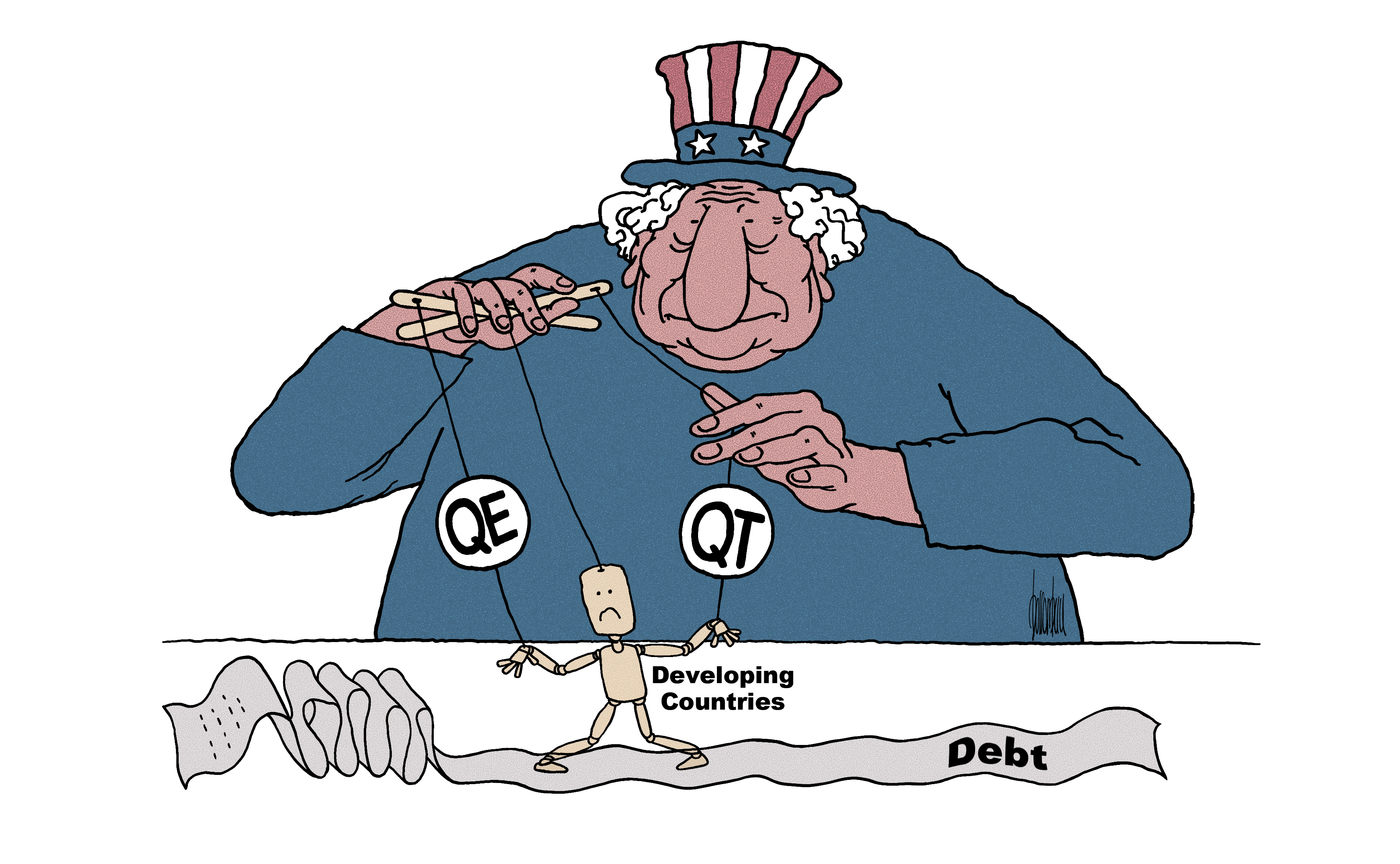 The U.S. Federal Reserve Board and the Federal Open Market Committee (FOMC) on Wednesday released the minutes of the committee meeting for July 2022. It shows that policymakers remain committed to raising interest rates as high as necessary in order to bring consumer prices closer to their 2% goal.

"Participants agreed that there was little evidence to date that inflation pressures were subsiding," the minutes said, hinting at another round of rate hike in September. The Fed has already raised interest rates four times this year, including two 75-basis-point hikes in June and July, in an effort to control the highest inflation in four decades.

The unusual move has stoked concerns that the U.S. is leveraging the dollar’s status as the premier international currency to diffuse inflation worldwide, leaving vulnerable countries with high foreign debts caught in the debt trap.

Since March 2020 the Fed resumed its zero interest rate policy and implemented unlimited quantitative easing (QE) to deal with the impact of the COVID-19 pandemic. The Fed's balance sheet expanded more than 1.1 times from $4.2 trillion at the beginning of March 2020 to $8.9 trillion at the end of February 2022, leading to a considerable credit expansion and liquidity of the U.S. dollars in the international market.

This massive and continuing surge of capital outflows to emerging and other developing economies prompts them to take on more debt and increase their foreign exchange exposure, attracted by low borrowing costs.

Most of the capital inflows are in the nature of portfolio investments, which are prone to sudden and volatile movement and put emerging economies at greater risk. While the western world has captured high returns from the rapid growth of the emerging economies, the latter are entangled in debt.

There were economists warned of the risks of interest rate changes in the developed world and exchange rate volatility that may exacerbate the debt burden of the developing countries. And it happens eventually, triggered firstly by the downward pressure on the global economy due to the COVID-19 pandemic and increasing geopolitical conflicts, and then interest rate hikes from the U.S. Fed.

There are signs of capital flight from emerging economies since the interest rate hikes and the US’ large-scale balance sheet contraction. Provisional figures compiled by the Institute of International Finance (IIF) show that international investors in emerging market equities and domestic bonds have seen cross-border outflows of $10.5bn this month, taking total outflows over the past five months to more than $38bn - the longest period of net outflows since records began in 2005.

The most immediate impact of the greenback outflow is the depreciation of some currencies. The Philippine peso has fallen about 5% this year, making it the worst performer among Asian emerging-market currencies. The Pakistani rupee has depreciated by as much as 20% this year and the Thai baht by more than 6%...

A stronger dollar has made it more expensive for developing countries, especially lower-income countries, to meet their dollar-denominated debt obligations. They fall into the loop of borrowing new debt to repay old debts and are stuck in the vicious cycle of low exchange rates and high-interest rates.

But that’s not the worst. When local governments and companies are in debt trouble, western companies are waiting to prey on high-quality companies at a cheap price, forcing them to fall into the trap under seemingly fair market rules.

According to a report published by U.K. non-profit the Jubilee Debt Campaign, developing countries’ debt payments rose 120% between 2010 and 2021, and are currently at their highest since 2001. The average portion of government revenues channeled toward external debt payments increased from 6.8% in 2010 to 14.3% in 2021, with payments shooting up in 2020.

Developing countries have mainly borrowed their new debts from Western commercial creditors and multilateral institutions. World Bank statistics show that between 2015 and 2020, commercial debts, financed by sovereign bonds in the international financial market, accounted for 42% of the new public external debt of low-income and lower middle-income countries. And 95% of the countries’ sovereign bonds were held by Western financial institutions, according to research by Eurodad on 31 key indebted countries.

World Bank estimates that low-income and lower middle-income countries have to make US$940 billion worth of principal and interest repayments in the next seven years. That includes US$356.6 billion to Western commercial creditors and US$273 billion to multilateral institutions, which account for 67% of the total payments due. They will have to pay more than US$300 billion to sovereign bond holders, most of which are Western financial institutions who are clearly the biggest source of debt service pressure for the borrowing countries.

Rising U.S. and global interest rates in 2022 could exacerbate the problem for many lower-income countries. Lebanon, Sri Lanka, Suriname, and Zambia are already in default.

The U.S. dollar is the world’s leading reserve currency. Its significant role in the global financial market ensures that its monetary and fiscal policy has an impact on economies across our interconnected world. It is necessary, therefore, for the U.S. to act with great responsibility and to work together with the emerging economies, to minimize the adverse effects of its policies.

However, the United States, holding “America first” philosophy, manipulated the alternating cycles of dollar depreciation and appreciation to create currency and debt crises for the world.

On May 4, Zerohedge, a U.S. financial website, quoted the former chief economist of the World Bank as saying, "The dominance of the U.S. dollar is the fundamental cause of the global financial crisis." This phenomenon is driving a global cause of de-dollarization.

Some countries are exploring adopting non-dollar currencies for economic and trade transactions and carrying out extensive currency swap agreements to minimize the risks of a volatile exchange rate and unexpected rate hikes of the U.S. dollar. And the Russian Ruble settlement order in response to the U.S. and Western sanctions is accelerating the process.