ISLAMABAD, Jul. 27 (Gwadar Pro)- At the award ceremony of the Huawei ICT Competition 2021-2022 Global Final held by Huawei Pakistan on Tuesday, a Pakistani team consisting of Sateesh Kumar, Iqra Fatima, and Bhagchand Meghwar, was awarded the first prize of 20,000 USD along with a mobile phone for each team member. 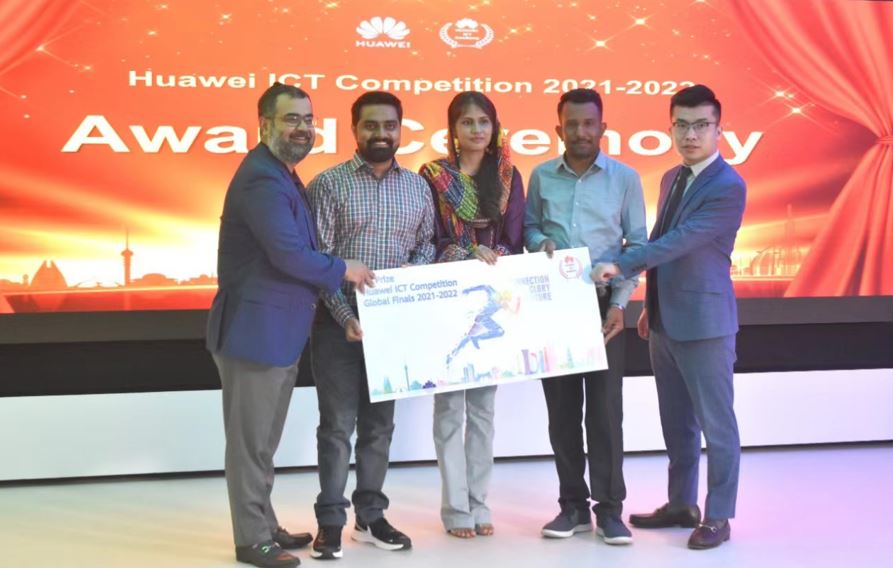 The competition, which was concluded in Shenzhen, China, attracted 150,000 students from more than 2,000 universities in 85 countries and regions. After national and regional competitions, 130 teams from 43 countries and regions faced off in the global final. Two teams from Pakistan participated in the Network Category of the Practice Competition with Team One clinching the 1st prize, and Team Two grabbing the 3rd prize.

Mr. Ahmed Bilal Masud, Deputy CEO of Huawei Pakistan, congratulated the winners and affirmed their infinite potential. On the occasion, he highlighted, “the competition is a great opportunity for Pakistani youth. Through this event, young Pakistanis have gained a deeper understanding of ICT and have a platform to make a name for themselves in the ICT industry.”

The star student of the winning team, Mr. Bhagchand, addressed the ceremony, saying “the Huawei ICT Competition served as a platform that allowed us to compete with and win against teams at regional and international levels for Pakistan.”

Sateesh Kumar, a Mehran University bachelor who came from a small town in Sindh, was motivated by his teacher to take part in the competition. He said it was an amazing initiative by Huawei, offering equal opportunities to engineering students all over Pakistan to showcase their talent, whether they’re from large bustling cities or small remote towns.

The next installation of the global event, The Huawei ICT Competition 2022, will be held under the theme ‘Connectivity, Honor, Future’. It will run from August to December and is a large part of Huawei’s commitment to nurturing the next generation of ICT leaders across the world.