XIANYANG, July. 12 (China Economic Net)- "Compared with wheat, cotton, rapeseed or beans, tomatoes require more fertilizers. Nitrogen, phosphorus and potash fertilizer are all essential. Besides, zinc, boron and other micronutrients can make it grow better. This means that farmers have to spend more to grow it. However, in recent years, the price of tomatoes in Pakistan has fluctuated very frequently, which is beyond our control. If the price fluctuates too much, the low price will cause farmers to suffer great losses, which greatly affects their enthusiasm, and in turn leads to a subsequent drop in production. Generally speaking, in Punjab, the largest tomato-producing region, April to May marks the start of the tomato high season. But this year, I’m not sure about that," noted Dr Syed Ahmad, Principal Scientist of Vegetable Research Institute, Faisalabad in an exclusive interview with China Economic Net. 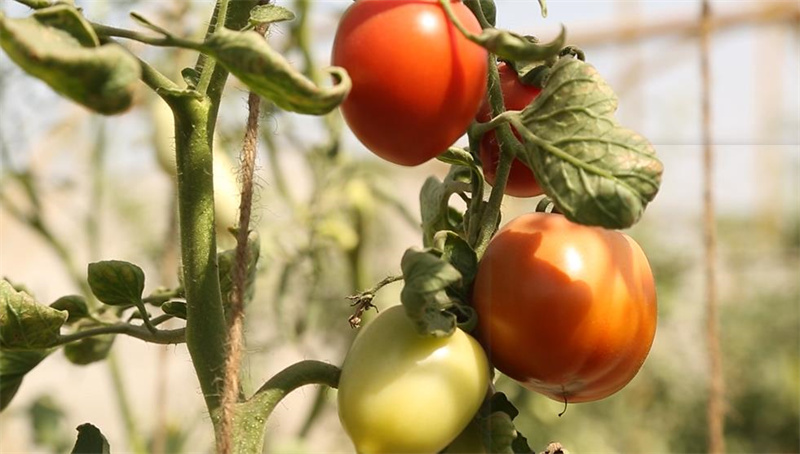 Tomatoes growing in greenhouses in Pakistan [Photo provided to CEN]
Dr Nadar K, Senior Scientific Officer at the National Agricultural Research Centre (NARC), indicated that in Pakistan, tomatoes have a total annual production of around 529,600 tonnes and an average yield of 9.2 tonnes per hectare. The downward trend in the prices of tomatoes, which are an indispensable part of most of dishes in the country, has been seen in Sindh province since early January. Muzzammil Aslam, Spokesperson to Finance Minister, also noted on January that the price of tomato has fallen to Rs35 at retail in Karachi, the biggest consumer center of the country.
So, what caused it? Reasons for the inequalities are complex. “Although it is the farmers’ decision on what and how much to plant, but at the government decision-making level, we lack an institution, or a system, to provide farmers with policy guidance on a macro level, so as to avoid blindly planting or abandoning a certain crop, which lead to yield fluctuation,” Dr Ahmad emphasized. If farmers don’t get good returns after a year of hard work, they would be disappointed and cut back on planting, and Pakistan has to import a lot of tomatoes, which are a must in most of the country's daily dishes. 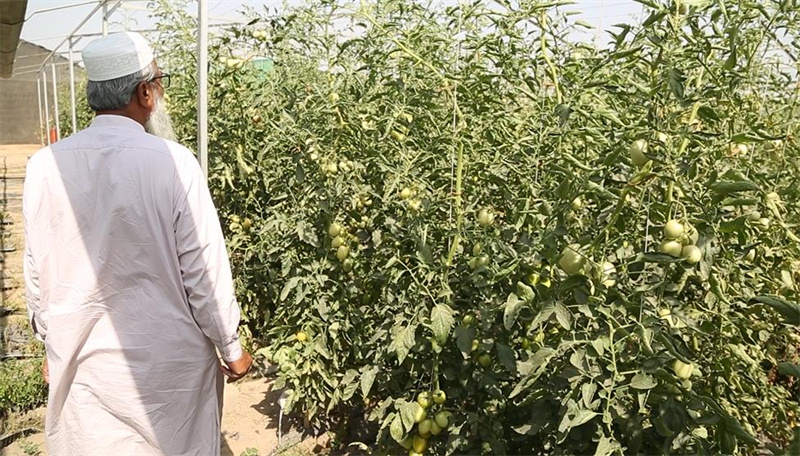 A local farmer tending tomatoes in a greenhouse [Photo provided to CEN]
In addition, the lack of advanced agricultural technology is also a key factor affecting the tomato production in Pakistan. “Growing tomatoes on ordinary land is affordable for most farmers. But if you use hydroponics or soilless cultivation, it will add a lot of cost,” Dr Ahmad told CEN. If a reasonably priced hydroponics or soilless culture technology can be introduced into Pakistan to guarantee the input-output ratio of farmers, he believes that this will be an excellent cooperation opportunity.
“At present, there are 13 varieties of tomatoes planted in our industrial park, of which TOMIMARU and DRC564 have the highest yields, with the yield per square meter reaching 40 kg and 60 kg respectively. In addition, they have beautiful fruit shape, long storage life, and strong resistance to diseases and insect pests,” Zhang Lin, the head of Shaanxi Yangling Aoda Modern Agricultural Technology Co., Ltd., mentioned while  interviewing CEN, “In order to promote the development of the park to a higher level, we will actively consider launching international cooperation plans such as talent export, technical cooperation and exchanges with other countries especially countries along the Belt and Road.” 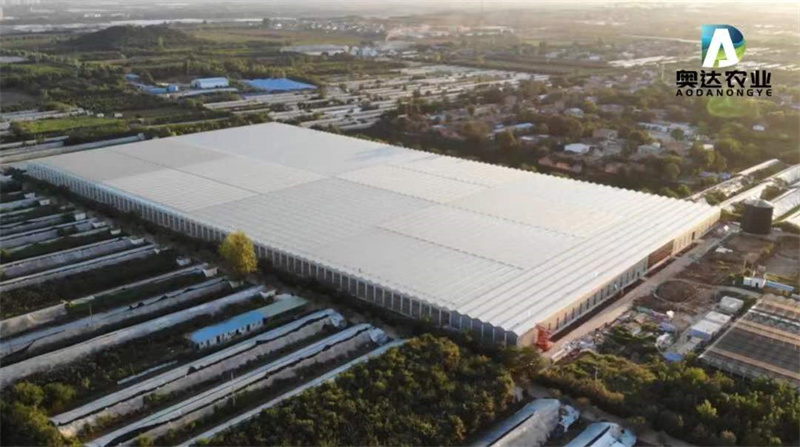 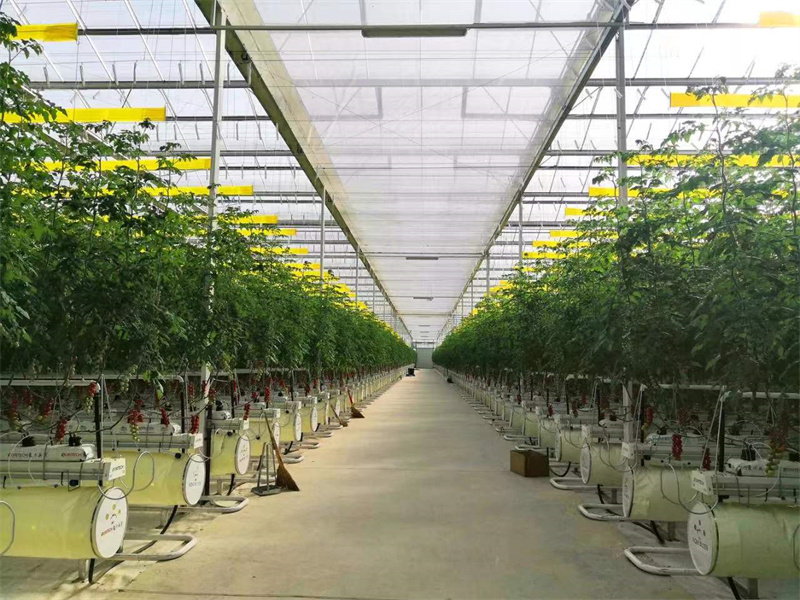 The greenhouse of Shaanxi Yangling Aoda Modern Agricultural Technology Co., Ltd. [Photo provided to CEN]
According to Zhang, Pakistan is facing problems such as lagging agricultural modernization, low level of mechanization, and confusing use of fertilizers and pesticides, all of which China has also encountered before. Promotion of soilless cultivation, improvement of shed facilities, selection of excellent varieties and strengthening of water and fertilizer integration, each link of facility agriculture is closely related to the yield and quality.
“Nowadays, our greenhouses are equipped with facilities such as sunshades, heat preservation curtains, heating pipes, high-pressure sprays, circulating fans, temperature and humidity sensors, and irrigation systems to jointly regulate the planting environment in the park,” Zhang analyzed that Yangling is located in the arid and semi-arid areas of northwestern China, which also face water shortages like Pakistan. In response to this problem, the park adopts a combination of groundwater and tap water irrigation, collecting groundwater and also designing a 3,000-cubic-meter reservoir to collect rainwater and purify it as an irrigation reserve. 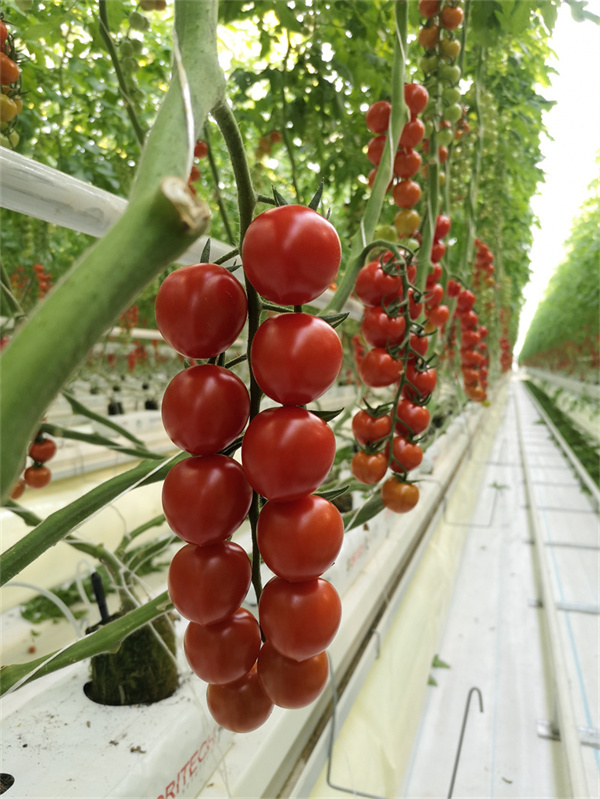 Tomatoes growing in a greenhouse with water and fertilizer integration technology [Photo provided to CEN]
As for another major factor limiting tomato production in Pakistan, pests and diseases, Dr Ahmad also pointed out that late blight and tomato virus disease can cause severe reduction in production, while main pests such as cotton bollworm and leaf miner can cause great harm to leaves, flowers and fruits in the growing period. In this regard, Zhang introduced a combination of physical and chemical control measures, focusing on prevention. At the same time, in order to avoid affecting soil quality, the use of various chemical fertilizers and pesticides should be minimized, and key prevention should be carried out in the early stage of pests and diseases based on previous planting experience and climatic conditions. In case of pests and diseases the combination of drug spraying and fumigation is relatively efficient.
“When it comes to cooperation, to my point of view, tomato value-added products must be our top priority. If Chinese and Pakistani investors can cooperate in the field of value-added products, in our major tomato-producing areas such as Punjab, tomatoes will be sold in large quantities during the peak period, which will inevitably lead to a drop in prices. At this time, if tomatoes can be purchased at a reasonable price and processed into by-products, farmers will not suffer losses,” Dr Ahmad suggested, “In addition, in terms of germplasm resources and technology introduction, it is also necessary for us to cooperate to bring all-round industrial upgrading to Pakistan's tomato industry.”
Information in this article comes from third party providers. This website does not provide explicit or implied warranty for such information and is not liable for any losses directly or indirectly caused by using such information.