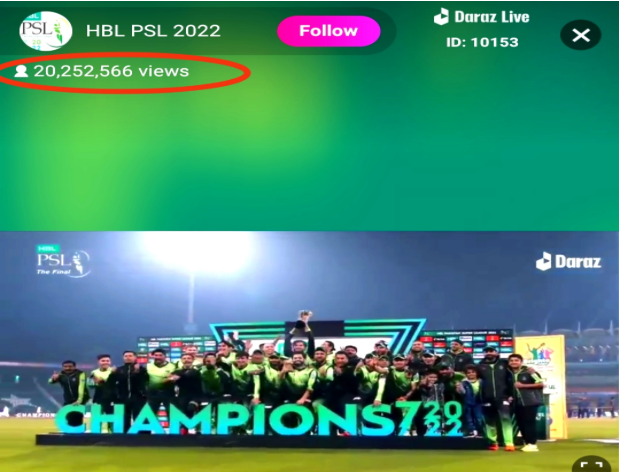 Playing first, Shaheen Shah Afridi-led Lahore Qalandar set a target of 181 before Multan Sultan. Muhammad Hafeez was a top run getter with 69 runs. Harry Brook and David Weise scored 41 and 28 respectively. For Multan Sultan Asif Afridi took three wickets for 18 while David Willy and Shahnawaz Dhani grabbed one wicket each. While chasing the target Multan Sultan was all out for 138. Khushdil Shah was top scorer with 32 runs for Multan while Shaheen Shah Afridi took three wickets.

On December 24, 2021, Daraz submitted the highest bid, pursuant to a public tender process, to live-stream HBL PSL 2022 and 2023 in Pakistan, which sees a walloping increase of 175 per cent from the value for the last two years. Daraz provided its users with free access to live streaming, which plays a crucial role in the growth and promotion of sports.

Besides Daraz, TikTok, the Chinese video-sharing social network App, also played a key role in the promotion of HBL PSL 7. TikTok has signed an agreement with Pakistan Cricket Board (PCB) to become the official Entertaining Partner of PCB for the seventh and eighth editions of PSL. The official anthem of the tournament was released on TikTok. During the tournament, PSL used its official TikTok account for important announcements. The PSL franchises including Islamabad United, Karachi