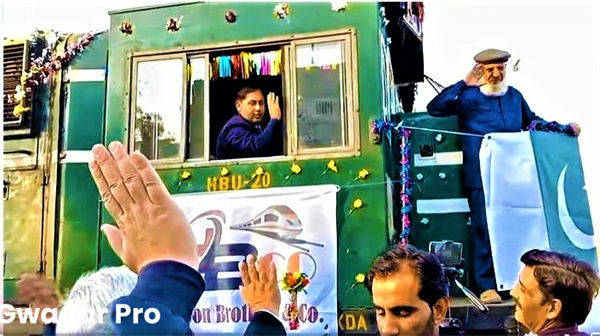 NOWSHERA, Dec. 30 (Gwadar Pro) - As a major move towards regional connectivity, a freight train was inaugurated from Azakhel Dry Port of Nowshera to Istanbul through Iran on Wednesday.

“The freight train provides direct access to Europe that will boost our industry and trade,” said Abdul Karim Tordher, SACM Khyber Pakhtunkhwa (KP) on Industries, while inaugurating the freight service. He said the freight train left with around 500 tons of raw materials, adding that the government intended to export finished products via freight service in the near future to Turkey and beyond to Europe.

“Compared to other countries, production cost is low while labor is cheap in Pakistan, which is a source of attractions for foreign investors,” said Mr. Tordher, adding “traders from Afghanistan and central Asian countries can also benefit from the freight service to export their goods”.

Azakhel Dry Port is located in the Nowshera district of KP, adjacent to the provincial capital of Peshawar. The dry port is at a distance of about 100 km from Torkham border with Afghanistan while the Chinese border of Khunjerab is about 750 km from the dry port.

As China-Pakistan Economic Corridor (CPEC) route passes through KP, it gives the province an economic uplift and industrial boost and it is the reason that the provincial government has launched several SEZs, including the Rashakai SEZ under CPEC. The government intends to include several other projects in CPEC, which will boost the economy besides providing jobs to the local population. The freight service between Azakhel and Istanbul has bright prospects , as a number of finished products in SEZs could be exported via this service to Turkey and to European countries beyond. Between KP and Punjab, freight trains will pass through the proposed ML-1, which is another proposed mega project under CPEC.