OKARA, Nov. 19 (Gwadar Pro) - In the backdrop of CPEC phase-II on agriculture cooperation, a first of its kind "Pakistan China Friendship Farm" is inaugurated with fervor and fanfare.

Acting Consul General of China in Lahore Peng Zhengwu in collaboration with provincial lawmaker (MPA) Ch. Muneeb ul Haq and federal lawmaker (MNA) unveiled "Pakistan China Friendship Farm" in Okara (City of Punjab), known as land of agriculture for corn crop, rice crop and potato crop. Okara, which is 150 kilometers away from Lahore, is famed for livestock and milk production in the whole country.

He was accompanied by a Chinese delegation comprising consulate officials and representatives from Chinese companies.

Addressing the inaugural ceremony, Peng Zhengwu said that relevant theoretical framework for further materialization of Pakistan China Friendship Farm is to be designed and strategized in consultation with Agro-based Chinese companies and Pakistan farmers & traders in coming days.

He said that currently Pakistan China Friendship Farm will only have its symbolic presence. "With efforts of both Chinese enterprises and Okara agriculturists will shape up the ‘Farm’ into a physical platform for the groundbreaking of their agriculture join ventures," he added. He said that it is an initiative to provide a chance to let Pakistani and Chinese traders and farmers put their action together to lay the foundation of modern agriculture in Pakistan.

Mr. Peng Zhengwu and his delegation were given a rousing welcome by citizens of Okara and the whole city was decorated with Chinese and Pakistani flags.

Mr. Peng Zhengwu inaugurated a state-of-the-art digital X-Ray machine donated by China to OPWA foundation. He was given a briefing on the machine's operations by the staff. 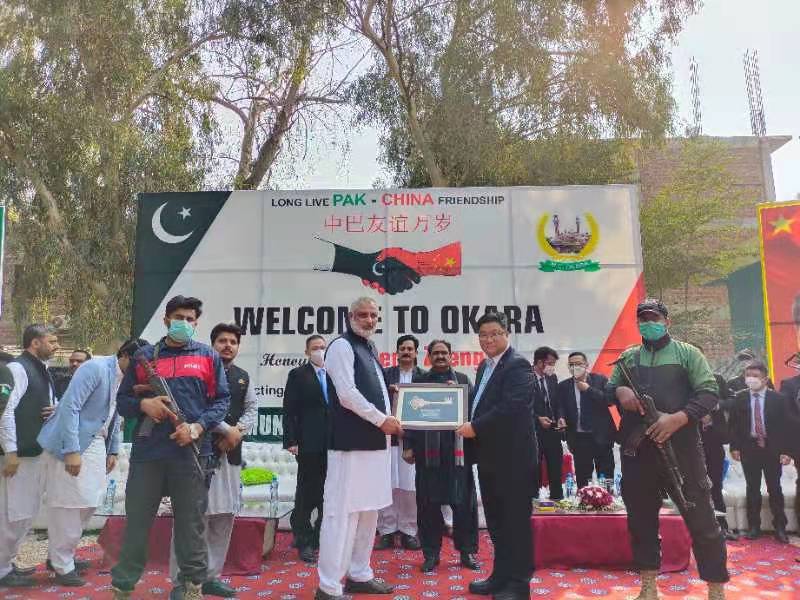 After, the Chinese delegation visited Municipal Corporations office where the city's residents greeted them with great fervor.

MPA Ch Muneeb ul Haq and senior member Ch Fiaz Zafar while addressing the gathering the gathering remarked that Pak China friendship was higher and stronger than the Himalayas and was not to be weakened at any cost. He asked for Okara to be made a twin city with a Chinese city and setting up an industrial park. He also requested that Okara be turned into a solar city and requested for the formation of an Agricultural forum here.

At the end to commemorate the occasion, Acting Consul General of China in Lahore Peng Zhengwu and his delegates were presented with shields.