ISLAMABAD, Oct. 18 (Gwadar Pro) - DERA ISMAIL KHAN: “I was inspired by Jackie Chan’s martial arts film ‘Rumble in the Bronx’ to become a martial artist,” says Irfan Mehsood, one of Pakistan’s leading Wushu/Kung Fu athletes with 43 Guinness World Records.  “Wushu” is the Chinese term for “martial arts” and has now become an international sport, with official events in many international and regional games.

Mehsood, from Ladha South Waziristan, was so impressed with Jackie Chan’s performance that he began to pursue a career in martial arts in 2005. “I started learning the basics of Wushu from local athletes,” Irfan Mehsood told Gwadar Pro. Mehsood’s family was settled in Ladha in South Waziristan, while during the harsh winter they would move to the nearby town of Tank. “I spent the first four years of my career in Tank and focused on learning the basics of Wushu,” he said. There were no qualified athletes in the area, however, he would learn from anyone with some knowledge of Wushu.

At that time, South Waziristan was under the virtual influence of the Taliban. In 2009, Pakistani security forces launched a massive military operation against the Taliban, forcing hundreds of tribesmen to leave their villages and settle outside of South Waziristan. Irfan Mehsood’s family settled in the city of Dera Ismail Khan, KP.

“I had more opportunities in Dera Ismail Khan. Besides my studies, I retained my passion for martial arts and leant different techniques,” he said, adding that he learned a lot by watching videos of different martial artists, especially those from Southeast Asia.

The 31-year-old Mehsood holds a master’s degree in sports sciences and an MS degree in finance. In the field of Wushu, Mehsood is ‘Black Shash 2nd Duan’ (Black Belt 2nd Don).

Irfan Mehsood runs “Lion’s Den,” a mixed martial arts (MMA) club in Dera Ismail Khan that he established in 2015. Since the inception of the academy, Irfan Mehsood has trained more than 500 youngsters. Passionate about MMA, more than 100 youngsters are currently getting training at Lion’s Den.  The majority of them are from the internally displaced people (IDPs) families of South Waziristan and Dera Ismail Khan. “The majority of the students at Lion’s Den are free while the club charges a nominal fee for other youth, just enough to cover the club’s monthly expenses,” Mehsood told Gwadar Pro. 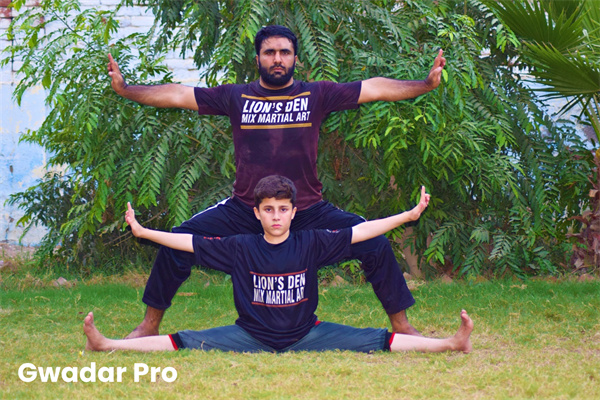 Irfan Mehsood and one of his students at ‘Lion’s Den’ in Dera Ismail Khan. [Photo/Tahir Ali]

“Being a representative of the tribal areas, I want to present a softer image of Waziristan to the world. I want to erase the misconception that the tribal youth are drawn towards militancy: no, they are not!” he told Gwadar Pro. Mehsood plans to start a Wushu club in Ladha, South Waziristan.

Irfan Mehsood has urged the Government of Pakistan and China to arrange exchange programs between the MMA artists of both countries. “As MMA originates from China and the country is the world leader in this martial art, our youngsters can learn a lot during exchange programs,” he told Gwadar Pro, adding that China can also provide youngsters from tribal districts with the requisite equipment for playing MMA. “Through games we can mainstream tribal youth,” he said, adding he has initiated Lion Fighting Championship, an event to promote the local talent.

The Hakla-D.I. Khan Motorway is one of the major connectivity projects under China-Pakistan Economic Corridor (CPEC) while the Government of KP has proposed several other projects to uplift the backward southern parts of the province.

“To benefit from these projects, the people of the southern parts of KP need to learn more about CPEC and China’s role in the development of the region,” senior Journalist Farooq Mehsud told Gwadar Pro.

Sports are an important way to bring the people of the two brotherly countries even closer, especially since youth globally are naturally inclined towards sports and games and need no convincing to be active. Games are also an easy way to understand each other’s cultures, in addition to improved health via training and physical activity. Studies from all over the world show that bored youth without attractive alternatives often turn to anti-social and criminal activity. Engaging with Wushu and spreading it in other communities can thus be of great service to the youth, especially of less-developed tribal areas.