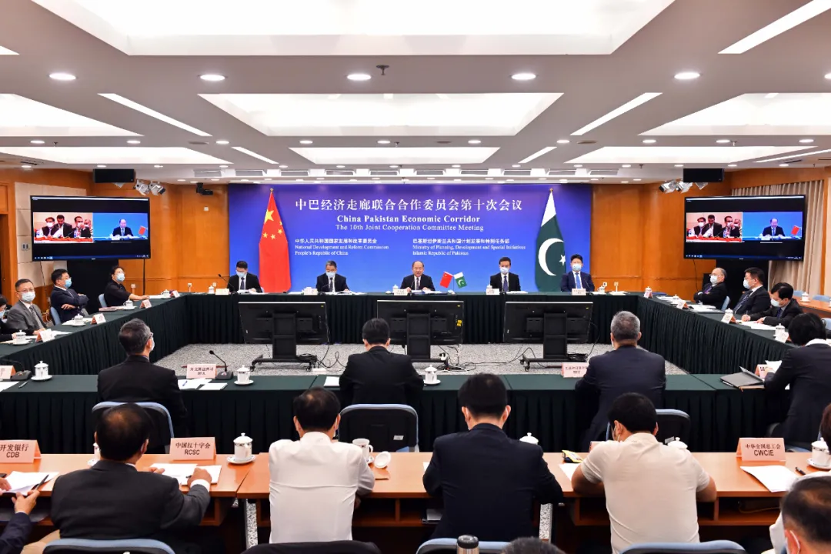 ISLAMABAD, Sept 23 (Gwadar Pro) - The 10th Joint Cooperation Committee (JCC) meeting of the China-Pakistan Economic Corridor (CPEC) was held via video link on the afternoon of September 23. About 200 representatives from the governments, financial institutions, enterprises and public institutions of China and Pakistan attended the meeting.

Addressing the meeting, Mr Ning Jizhe, deputy head of China's National Development and Reform Commission, said that the all-weather strategic partnership between the two countries is as solid as a rock and rooted in the hearts of the two peoples.

Mr Ning noted, CPEC as the flagship project under the Belt and Road Initiative (BRI) has reaped fruitful results over the past eight years, bringing a direct investment of USD 25.4 billion to Pakistan and creating numerous jobs in Pakistan.

He pointed out that at the 70th anniversary of the establishment of China-Pakistan diplomatic ties, both sides should focus on CPEC construction through the construction of Gwadar Port, energy and infrastructure, and industrial cooperation while fully tapping the existing infrastructure.

He said, both countries should promote the healthy, high-quality development of CPEC by building the Health Corridor, the Industrial Corridor, the Trade Corridor, the Digital Corridor and the Green Corridor, and work together to build an even closer China-Pakistan community with a shared future in the new era.

In his speech, Asad Umar, Minister of Planning, Development & Special Initiatives of Pakistan, remarked that the iron-clad friendship between China and Pakistan has "stood the test of time" as he expressed his thanks for China's assistance in vaccines.

Mr Umar said that phase one of CPEC has "made huge progress" in infrastructure thanks to the commitment of the top leadership of both countries, and that as CPEC has entered the second phase of high-quality development, both sides will foster closer economic ties and realise the great visions of the leaders of both countries to live up to the expectations of our two peoples.

Both sides exchanged views on security measures for Chinese projects and nationals in Pakistan.