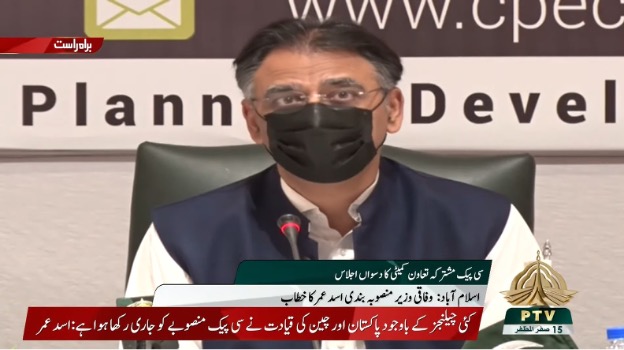 ISLAMABAD, Sept 23 (Gwadar Pro) - “Our China Pakistan Economic Corridor (CPEC) cooperation successfully stood the test of time during the very challenging pandemic, and the work on all CPEC projects continued unhindered mainly due to the resolute commitment of the top leadership of both countries,” said Planning and Development Minister Asad Umar while chairing the 10th meeting of Joint Coordination Committee (JCC) on CPEC.

Asad Umar said that it reflected the priority assigned by both China and Pakistan to CPEC and that even in the most challenging circumstances, the CPEC projects continued and met their deadlines. “We have to be proud of the developments that have taken place since CPEC was launched several years back,” Mr Umar added.

He said the first phase of CPEC has already provided dividends by filling in voids in energy and communication infrastructure and that phase two of CPEC is now underway. According to him, the second phase has a much broader scope of cooperation than the initial projects or Phase 1 of CPEC. The new JWGs accelerated industrial cooperation initiative in the form of new SEZs at Rashakai and Allama Iqbal industrial city in Faisalabad, which is a testimony to the broadening and deepening of CPEC.

“We have also made progress in development and operationalisation of Gwadar Port and the free zone,” he said, adding that it is a reflection of the optimism and the confidence that we have in the future of CPEC, particularly in the industrial cooperation, and the CPEC South Zone, which was near its completion while Prime Minister has recently inaugurated the North Zone of Gwadar.

“Investments come from both Chinese and Pakistani investors and we would in fact welcome investment from third countries as well,” said Asad Umar.

“Learning from the Chinese experience and in line with our Prime Minister’s vision, we have shifted our development focus towards remote regions of Pakistan, to uplift the deprived areas and alleviate poverty. In addition to the CPEC projects for the Western Route, many other projects are now underway in the province of Balochistan, and that will make Gwadar a far more effective and attractive port destination for investment and trade.”

According to Asad Umar, Main Line 1 (ML-1) in transport infrastructure remains an extremely important project and both sides have made progress in it. “We hope as the bilateral negotiations are at an advanced stage, these will be concluded soon,” he said.

Talking about agriculture cooperation, Asad Umar said that the majority of Pakistan’s population is dependent on agriculture and livestock and that there is tremendous potential for improvement and modernisation in this field.

He said that Pakistan would also benefit from Chinese research and technical advancement in agriculture. “China has achieved great food security and economic prosperity for the masses, and we believe that this cooperation, particularly through this joint working group and agriculture, will contribute towards the same for Pakistan,” Mr Umar added.

The Minister appreciated China’s support to Pakistan during the COVID-19 pandemic and said that “It is truly a testimony to the iron brotherhood and our historic strategic partnership.”