ISLAMABAD, Aug.13(Gwadar Pro) - Pakistan will celebrate its 75th Independence Day on 14th August tomorrow with a focus on planting trees all over the country. The plantation campaigns are engaging government officials, NGOs, community members, media, school children and teachers.

Citizens are encouraged on electronic and social media to plant at least 1 tree on this Independence Day in an attempt to make Pakistan green and to minimize the effects of global warming.

On Thursday, under Prime Minister Imran Khan’s tree-planting campaign, thousands of school students in Gujranwala along with their teachers set a world record of planting 52,000 saplings in 40 seconds.

Adviser to Prime Minister on Climate Change Malik Amin Aslam said “the people of Gujranwala have given a gift to the country on the 75th Independence Day with a message to the country that 14th August should be commemorated as Green Pakistan Day and everyone should plant at least one plant on the day.”

Ariel view of the tree plantation campaign in Gujranwala

Following the tree plantation campaign, the Parks and Horticulture Authority (PHA) kicked off the "Plant at Doorstep" campaign under which various teams will provide saplings to people at their residences.

A spokesperson for PHA, Nadia Tufail, said that the “Plant at Doorstep” campaign would continue till August 14 as the current month of Independence would be celebrated with the plantation of maximum trees.

Briefing the committee, the DG said the campaign which would continue till the end of the current month was being launched on the directives of Chief Minister Mahmood Khan and it would help ensure a clean and green environment to citizens besides adding to the beauty of the metropolis. 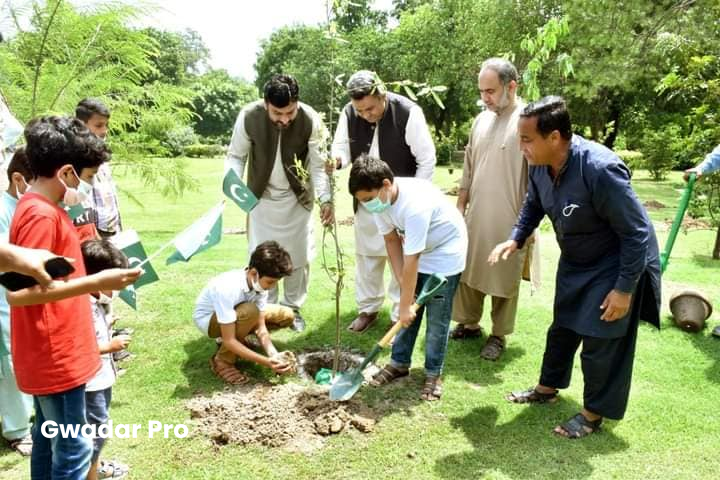 Ms. Farooq said the plantation has been considered as the cheaper and effective measure for overcoming the whooping effects of environmental degradation and rising temperatures.

According to the United Nations Climate Change Report of 2017, the average number of trees must be above 25% of the land in a particular country.

However, according to current data available on trees, only 4.8% of the land of Pakistan is covered with trees, which is one of the lowest ratios in the world.

It cannot sustain the current heatwaves occurring in different parts of the country. Therefore, timely measures and campaigns with a large  involvement of people would help reduce the environmental risk to the country.