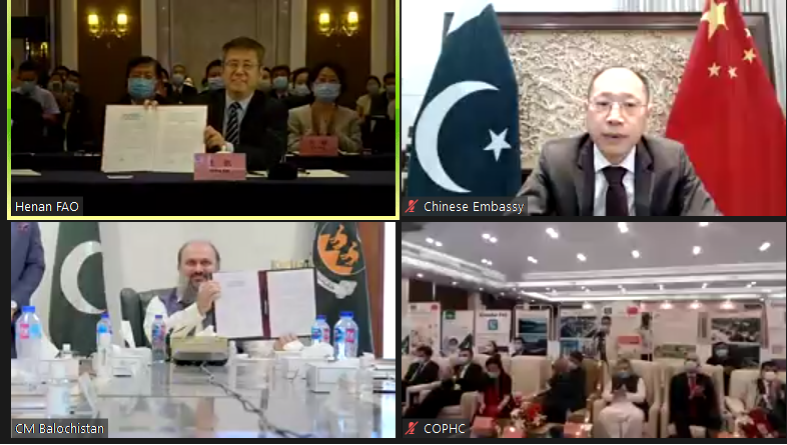 GWADAR, July 15 (Gwadar Pro) - Balochistan and Henan province of central China have signed a letter of intent to establish sister province relationship through a video conference on Thursday, signaling more pragmatic cooperation in the future between the two major agricultural provinces that are both endowed with rich resources.

The conference also witnessed the unveiling ceremony of PAK-CHN (Puyang-Gwadar) Friendship Green Park and Henan Agricultural Industrial Park, which are part of the outcomes of Prime Minister Imran Khan’s visit to Gwadar in early July.

Addressing the event, Governor of Henan Province H.E. Wang Kai said the establishment of sister relationship between Balochistan and Henan is a significant development for both sides and the two provinces should strive to become a model of China-Pakistan cooperation at the provincial level.

Wang specified that Zhengzhou Airport Economy Zone and Gwadar Port, both as logistics hubs, are possessed with cooperation opportunities in manufacturing, tourism, e-commerce, and modern service industry, but it lies in the efforts of the two governments to realize these potentials. He stressed the importance of organizing exhibitions and business matchmaking activities between the two provinces to enhance the business community’s understanding of each other’s markets and expand the scope of trade and investment.

The development of Henan Agricultural Industrial Park should be placed as a high priority, Wang noted, adding that the park will play an important role in facilitating storage and cold chain and promoting in-depth cooperation in the agricultural sector.

Chief Minister of Balochistan H.E. Jam Kamal Khan pinpointed that agriculture plays a pivotal role in the economic development of both Balochistan and Henan provinces. While they have some in common in agricultural development, there is more for Balochistan to catch up in the technological aspect.

Highlighting the opportunities presented by the China-Pakistan Economic Corridor (CPEC) in agricultural and industrial development, Jamal expected the cooperation could bring more changes to Balochistan as the two provinces strengthen economic ties and mutual exchanges.

Pakistani Ambassador to China H.E. Moin ul Haque stressed the significance of the event. He noted Balochistan is essential for CPEC, as Gwadar lies in the heart of the project, while Henan, as a historic and cultural province of China, has been excelled in the agriculture and textile industry and renowned as a busy transportation hub. In this condition, the inter-provincial cooperation is bound to bring more benefits for the two sides.

Chinese Ambassador to Pakistan H.E. Nong Rong, represented by Deputy Chief of Commission Mr Xie Guoxiang in the conference due to tight schedule, congratulated the inter-provincial partnership, calling it a step towards the building of a shared community between Pakistan and China. Reviewing his visit to Gwadar weeks ago with the Prime Minister, Nong expressed recognition of the work completed by enterprises from Henan in improving the environment in Gwadar and developing the port and the free zone.

More than ten enterprises from each side were also invited to the conference to present their businesses, ranging from grain crops, product processing, storage cold chain, to seafood, mango, citrus, dried fruit and rapeseed, etc.