XINJIANG, June 22 (China Economic Net)“Pakistani give us oil when there is a shortage of oil and supply us food when there is a shortage of food. They always try their best to give a hand when Chinese faces difficulties and obstacles. In my opinion, where does the human community of common destiny start? It starts between the friendship of China and Pakistan.”Having more than 30 years of friendship with Pakistan and crossing the China-Pakistan border for more than 270 times, Yuan Jianmin moves forward with his mission and always receives the selfless help and support from Pakistani military and civilians.

From participating in the boundary demarcation between China and Pakistan in the 1980s, to serving as the commander-in-chief of the earthquake rescue in northern Pakistan in 2005, and then crossing the Western Route of China-Pakistan Economic Corridor, there are countless stories between Yuan Jianmin and the neighboring country.Now he serves as the Counselor of the People's Government of Xinjiang Uyghur Autonomous Region and the Vice President of the Xinjiang People's Association for Friendship with Foreign Countries. On the 70th anniversary of the establishment of diplomatic relations between China and Pakistan, China Economic Net conducted an exclusive interview with him.

From bustling to barren: the son of Xinjiang people

At the border of Xinjiang and Pakistan, there is the highest pass in the world-the Khunjerab pass, which is located in the Pamirs and the Tashkurgan Tajik Autonomous County of Kashgar (hereinafter referred to as "Tajik county"). It is the county that Yuan voluntarily go to help reconstruction of Xinjiang. After graduating from High School in Taizhou city, Jiangsu province in 1975, he decided to go to the most difficult place in China.

“I kept herding sheep for three years in a pasture at an altitude of 4,300 meters.What moved me the most at that time was the senior Tajik grandmother who give me eggs which are for her grandson.4 eggs can be exchanged for a small piece of brick tea. A small piece of brick tea is enough for a family of 5 to make milk tea for a week. It can be seen that the eggs at that time are precious. They boiled the eggs and put them in their clothes and warmed them by their body temperature just to give me warm eggs.”Treated like a family member made Yuan vowed to give back to Xinjiang.

After three-year Xinjiang reconstruction assistance, Yuan went to the party school in Xinjiang and returned to Tajik county after graduation. In September 1986, Yuan was elected as the deputy magistrate head by a large number of votes. 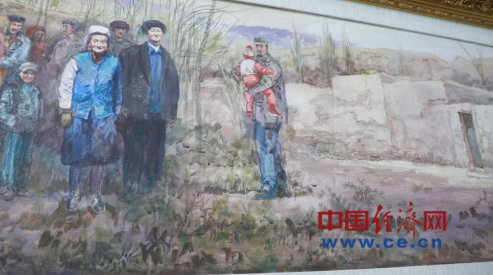 “There is a painting outside my meeting room, painted by a famous sculptor. He went to Tajik county and the local residents told him that I was their son. He was inspired and had this painting.”Every time Yuan mentioned Tajik county and the people, he had tears in his eyes. “I have received many honors in my life, and the most cherished honor in my heart is the evaluation of the people calling me "the son of Xinjiang people.""

Yuan witnessed in the border demarcation between China and Pakistan. From the signing of the protocol to open the Khunjerab pass in 1982, to the opening of the port to a third country in 1985, and to the full opening up later, Yuan participated in the whole process, which also became the beginning of his indissoluble bond with Pakistan. 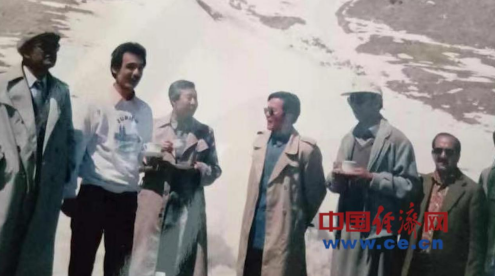 1987, Yuan Jianmin (fourth from left) saw off the former Supreme Chief Executive of Northern Pakistan at the China-Pakistan boundary marker when Yuan was the deputy magistrate of Tajik county (Photo provided by Yuan Jianmin)

Mutual support deepens the friendship between the two countries

In March 1996, an avalanche occurred on the border between China and Pakistan. At that time, Chinese vehicles took on the task of transporting supplies to Pakistan and were trapped. As the temporary commander-in-chief, Yuan rushed to the scene for rescue. “When the convoy entered Pakistan, it encountered an avalanche. The force of the avalanche shovelled a 40-ton bulldozer one kilometer away. Two Chinese people were killed on the spot. In order to rescue the Chinese convoy and personnel buried in the sudden accident, Pakistan sacrificed four officers and soldiers.” Yuan recalls, “When I arrived there, at least 10 officers and soldiers of the Pakistan Khunjerab Security Police Force had not eaten for two days and gave their food to our 20 trapped drivers.”

In 2005, a magnitude 7.6 earthquake occurred in  Pakistan-controlled Kashmir region, leaving 3.5 million people homeless. Yuan was once again appointed as the commander-in-chief of China’s aid to Pakistan. The tents were safely delivered to the hit area, and the China-Aid Pakistan Earthquake Relief Village was jointly established.

Yuan said in a choked voice: “I was surrounded by 4 to 5 Pakistani soldiers each time I went to the scene. When they saw flying sand and rocks, they knocked me down, they used their bodies to block the rocks for me. Many officers and soldiers broke their waists and legs. How can you be emotionless to the China-Pakistan friendship when you experience all this? Why not commit to maintaining China-Pakistan relations?”

In recognition of his contributions to the promotion of Pakistan’s social and economic development, Yuan was awarded the "Tamgha-e-Imtiaz", the civil honor award by the President of Pakistan in August 2011.

Light up the border between China and Pakistan: a single spark can start a prairie fire

In 2014, Yuan Jianmin put forward the suggestion of "brighten up the China-Pakistan border" and organized the implementation of solar generators settled in the Pakistani village on the border of the two countries. As a result, the ancient village bids a total farewell to the history of non-electric lighting. Yuan also brings some solar lights to the local residents. “Many of the remote areas of Pakistan do not have electricity, and it is hard for the children to do their homework at night. Candles or oil lamps are the rare choices. Solar lights don’t need to charge. One light can help one child or even two to three children in their studies.”

When the conditions for building a solar power station were not met, Yuan relied on himself to carry the solar lights across the border each time he visited Pakistan, lighting up a spark for the backward villages. Yuan has donated tens of thousands of solar lights to border villages in Pakistan so far. These solar lights have become huge positive energy for friendship of the two countries.

Here is another story of Yuan and his Pakistani friend. In the northern part of Pakistan, there is a businessman named Ayub Khan, who was engaged in the trading of gems and leather goods in his early years. However, due to the poor business, his family was in trouble several times.He and Yuan  met when Khunjerab pass was open in 1980s. Although they both left the border later, their friendship was never dilute because of time barrier. Ayub Khan and his family moved to Islamabad a few years later, Yuan heard from a friend that the Pakistani old friend had acute renal failure and needed dialysis. “I went to the capital of Pakistan to find him, and donated to him several times to help him continue his life.”According to Yuan’s recollection, the doctor said that Ayub Khan life might not last long if he couldn’t accept normalize dialysis. Ayub Khan always takes Yuan’s hand when Yuan visits him and says: “when I heard that you are here, I think I am totally cured.”It is the trivial and impressive stories that connects Yuan and the Pakistani friends to the profound friendship.

Higher than mountains, deeper than oceans, sweeter than honey: Entrusting China-Pakistan friendship to the younger generation

In 2013, 2015, and 2016, Yuan Jianmin completed the eastern, western and aerial surveys of the China-Pakistan Economic Corridor in three times. “As the commander-in-chief of a large joint convoy of 270 vehicles between China and Pakistan, I led the convoy across the Western Route of Pakistan in 2016.”The Western Route of the Corridor is a high-risk area in Pakistan. It is often difficult to open to traffic due to cliffs and requires temporary erection of steel plates. “The 1,200 kilometers journey lasted 13 days. It was very dangerous, but in the end the convoy arrived at Gwadar Port unharmed, and for the first time passed through the China-Pakistan Economic Corridor from the Western Route.”Yuan is proud of this special experience. Although there has always been controversy over the construction of the China-Pakistan Economic Corridor, erroneously reported that the  Corridor only cares about the Eastern Route. Therefore, China responses with practical actions to express its support for Pakistan.

In 2015, Yuan Jianmin (in white clothing) visited the northern part of Pakistan, local people spontaneously greeted and sang and danced at the China-Pakistan boundary marker

Yuan has traveled between China and Pakistan for more than 30 years and has visited the neighbor country for  more than 270 times. He has left his footprints in almost all the cities in Pakistan. Speaking of the friendship between the two countries, Yuan said: “Former leader Hu Jintao once said about the China-Pakistan relationship as good brother, good partner, good friend and good neighbor. Chinese President Xi Jinping put forward earnest expectations for the human community of common destiny between the two countries. The China-Pakistan Economic Corridor is also an important pilot project of the “Belt and Road Intiative”, which shows that our leaders and our country attach great importance to Pakistan.” The Pakistani government and people also spoke highly of China-Pakistan friendship. “They often say that China-Pakistan relations are higher than mountains, deeper than oceans, and sweeter than honey. The deep friendship of the Pakistani people towards the Chinese people can be seen everywhere and deeply rooted in the hearts of the people.”