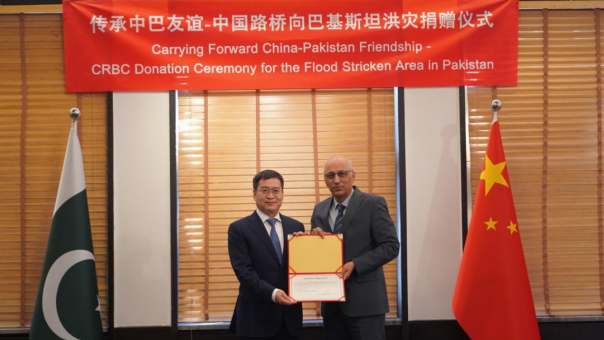 BEIJING, Jan. 10 (China Economic Net) - China Road and Bridge Corporation (CRBC), a longstanding partner of Pakistan in transport and infrastructure network development, donated a total of USD 100,000 to the flood-hit families in Pakistan. In October, 2022, Wang Lijun, Deputy Secretary of the Party Committee and General Manager of the company, attended the donation ceremony at the Pakistani Embassy in China.

According to the company, the donation will be divided into two parts, RMB 100,000 will be donated to the Pakistani Embassy in China and PKR 20.08 million will go to Pakistani Prime Minister's Flood Relief Fund.

Wang expressed sincere sympathy to the families of the victims and those injured in the flood. He believed that with the joint efforts of the Pakistani government and people, they would overcome the difficulties and life and work would go back to normal at an early date.

Wang talked with Pakistani Ambassador to China Moin ul Haque about the company's key project progress in Pakistan, and expressed his heartfelt thanks to the Embassy for its long-term guidance and help.

Speaking at the occasion, Ambassador Moin paid tribute to CRBC's contribution towards Pakistan-China friendship and its role for successful completion of many vital infrastructure projects in Pakistan including Khunjerab-Raikot section of Karakorum Highway and KKH realignment projects at Attabad Lake and Havelian-Thakot sections.