Investment in solar energy need of the hour

By Wang Kai | China Economic Net Jul 14, 2022
KHANEWAL, Jul. 14 (China Economic Net)- In the village of Qatal Pur in District Khanewal of Punjab province, Dr. Abid Ali is sitting in his yard, enjoying the breeze from the fan. Not far away is a solar panel powering the small appliance that is indispensable for many in summer. The solar panels, each with a cost of about PKR 120,000, are becoming more commonly seen in his village.
“Many households in our village have solar panel, especially for air-conditioning in summer. As more Chinese companies are providing solar panels to Pakistan, the problem of electricity shortage is greatly alleviated”, he told reporter of China Economic Net (CEN).
Energy of the Future
In Pakistan, the insufficiency of power which leads to surging electricity tariff and foreign exchange expenditure on imported energy is aggravating the necessity for the country to be more self-sufficient in power generation.
Currently, thermal power still takes the bulk chunk in Pakistan’s energy mix, accounting for 59% of the total installed capacity.

Pakistan Installed Power Generation Capacity, April 2022. Source: Pakistan Economic Survey 2021-22
“Importing the fuel on which most of our power plants run has put a heavy burden on our treasury. That is why we have been thinking for a long time that we should focus on the assets that are being produced in our country. If solar is installed on every roof, those who suffer from heat and load shedding can generate their own electricity at least all day, and if some surplus electricity is generated, they can sell it to the grid. They can also support their children and serve elderly parents”, Mr. Musadik Masood Malik, Minister of State (Petroleum Division) said in an interview with CEN.
As a renewable energy source without fuel requirements, Solar PV is significantly cost effective when compared to imported energy, RLNG, and gas, as shown in the table below that compares fuel cost (in Rs / kWh) with generation (in GWh) for FY 22 (excluding K Electric Statistics).

Fuel cost by energy source FY 22. Source: Nepra State of the Industry Report 2021
According to World Bank, Pakistan requires only 0.071% of its total land area (mainly in Baluchistan) to achieve the benefits of solar power. If this potential is utilized, all of Pakistan’s current energy needs can be met with solar power alone. 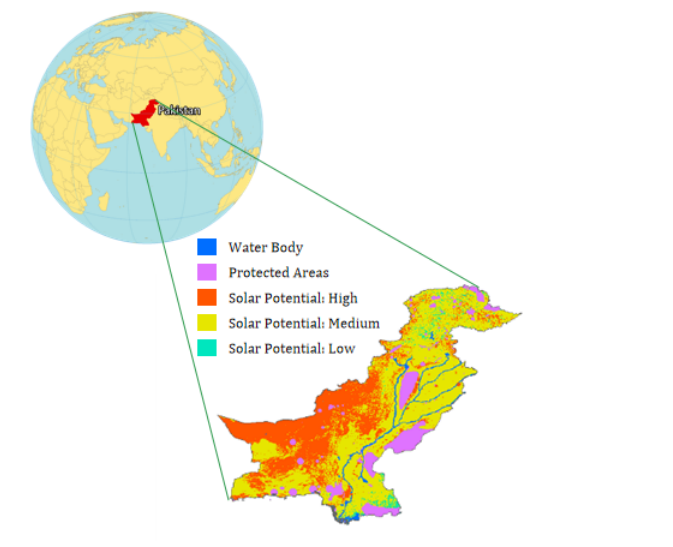 Pakistan’s Solar Potential. Source: Omicsonline.org.
Leapfrogging Development
An increasing number of companies and organizations are catching the tide as shown by the robust growth trend of Pakistan’s solar consumption. As of March 2022, AEDB Certified Solar System Installers grew by around 56%. Net Metering Based Solar Installations and Power Generation grew by 102% and 108% respectively.
According to KASB analysis, it represents both government support and consumer demand & supply.
“Since late 2016, solar panel has been installed in 10,700 schools in Punjab and more than 2,000 in Khyber Pakhtunkhwa. Punjab schools that were fitted with solar power collectively save around Pakistani rupee PKR 509 million (~USD 2.5 mn) annually, which represents around PKR 47,500 (USD 237.5) being saved on a per school basis annually. Currently the installation of solar panels in 4,200 schools in Punjab and over 6,000 schools in Khyber Pakhtunkhwa solar panel is in progress”, a KASB analyst told CEN.
As per the Indicative Generation Capacity Expansion Plan (IGCEP), in May 2021, Imported Coal accounted for 11% of total installed generation capacity, RLNG (Regassified Liquefied Natural Gas) accounted for 17%, whereas solar only accounted for around 1%. It is expected that the reliance on solar energy will increase to 13% and the reliance on imported coal and RLNG is expected to decrease to 8% and 11% respectively. 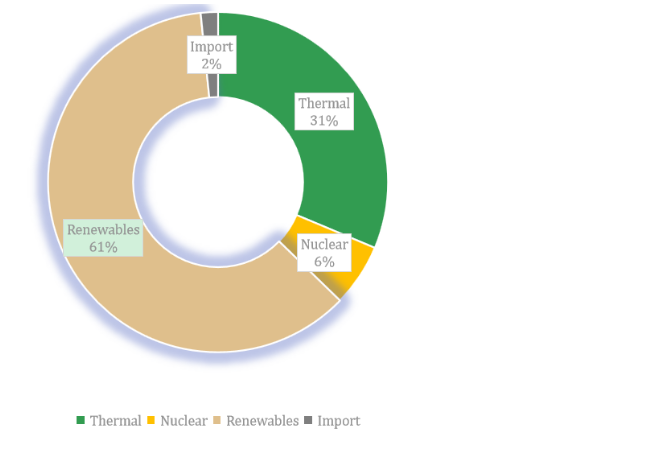 Planned Forecasts for 2030 – Installed Capacity MW. Source: NEPRA Approved IGCEP-Sep 2021
Close cooperation with China
Currently, out of the $144Mn foreign investment in PV plants of Pakistan, $125Mn is from China, accounting for nearly 87% of the total.
Among the 530MW cumulative generation capacity in Pakistan, 400 MW (75%) is generated from Quaid-e-Azam Solar Park, the first ever power plant capable of generating solar energy in Pakistan, owned by the Punjab government and built by China’s Tebian Electric Apparatus Xinjiang New Energy Co.
With 400,000 solar panels spreading over 200 hectares of flat desert, the plant was initially launched with a capacity of generating 100 MW of power for Pakistan. Since 2015, there have been addition of 300 MW power generation capacity with 3 new projects, and there are numerous planned projects reported for the Quaid-e-Azam Solar Park by AEDB with cumulative capacity of 1,050 MW.
Chinese companies are also major suppliers to many PV Projects in Pakistan such as Mini Solar grids in KP and ADB’s Access to Clean Energy Program. The solar mini-grid stations in Jandola, Orakzai and Mohmand tribal districts are in the final stages of their completion and soon the business community will get uninterrupted, cheap, green and clean energy.
Pakistan’s Solar Energy Market is expected to record a CAGR of 2.5% from 2022 to 2027. Up to now, the average utilization rate of the operational Solar PV plants is merely 19%, far from the over 95% utilization rare in China, representing huge opportunities to be tapped.

As experienced PV Plants investors in in Pakistan, Chinese companies are more likely to further leverage their learning in solar industry. They can also benefit from China’s pledge to move away from coal-based energy generation and promote green energy in developing countries. Meanwhile, Pakistani government has set ambitious targets for Solar PV Capacity under the Integrated Generation Capacity Expansion Plan (IGCEP) of 2021. Therefore, Chinese companies can expect a supportive government attitude to investment in Solar PV Plants in Pakistan and the cooperation would complement both countries commitment to the socio-economic development of whole region.