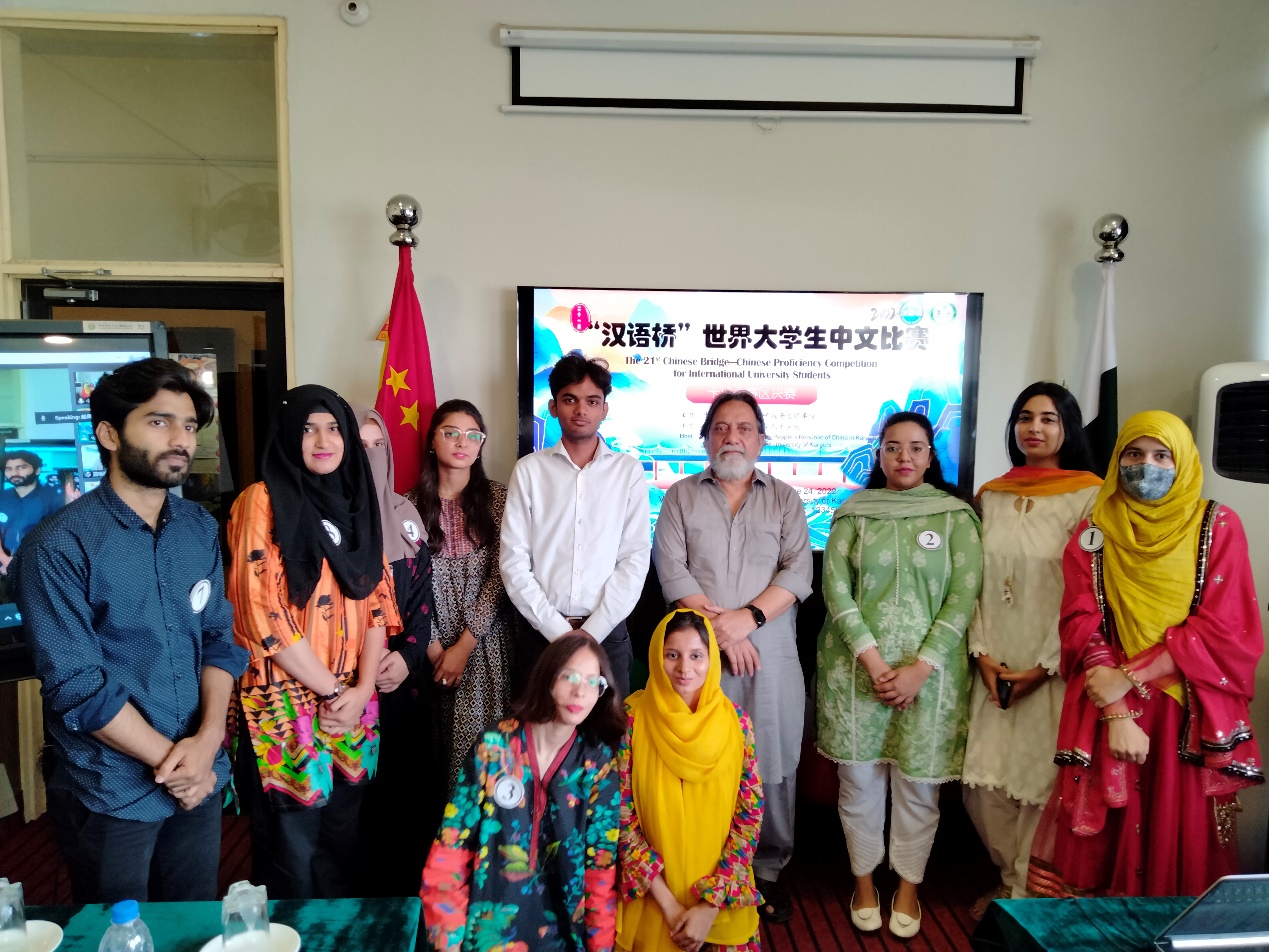 Sheikh Mohammed Nasiruddin Khan, Pakistani director of CIUK, together with the contestants

KARACHI, Jun. 25 (Gwadar Pro) - “It is hoped that Pakistani young students can be the inheritors of China-Pakistan friendship, the enhancers of the development of China and Pakistan, the promoters of the hearts and minds of the people of China and Pakistan, to convey the friendship of ‘higher than the mountain, deeper than the sea and sweeter than honey’ in Chinese language,” highlighted Li Bijian, Chinese Consul General in Karachi on Friday.

During the Karachi Division Final of the 21st Chinese Bridge-Chinese Proficiency Competition for International University Students jointly launched by the Chinese Consulate General in Karachi and Confucius Institute at the University of Karachi (CIUK), the Consul General stated that the meaning of “Chinese Bridge” has gone beyond the competition itself. It is a bridge of acquaintance, friendship and cooperation. He hoped Chinese and Pakistani young students will jointly build a closer community with a shared future between the two countries in the new era, and contribute to the promotion of China-Pakistan cultural exchanges and the construction of China-Pakistan Economic Corridor (CPEC).

In his speech, Zhang Xiaoping, the Chinese director of CIUK mentioned that the teachers who were killed in the attack had done great work for the competition. CIUK officially resumed teaching activities on May 23. Chinese and local teachers continue to teach Pakistani students Chinese both online and offline. Zhang Xiaoping added that Sichuan Normal University and Karachi University will continue to strengthen cooperation and promote academic exchanges between the two universities.

Zhang further expressed deep gratitude to the Consulate General of Karachi for providing safety protection for the teachers, arranging treatment for the injured teachers and fully supporting the aftermath of the Confucius Institute after the terrorist attack. Muhammad Nasiruddin Khan, the Pakistani director of CIUK, believes that with the joint efforts of both countries, CIUK will definitely achieve further glory.

The final was divided into four parts: self-introduction, knowledge competition, talent show and keynote speech. During the competition, contestants shared their indissoluble bonds with the Chinese language and delivered speeches with the theme of “All under heaven are of one family”. Their standard pronunciation and sincere emotion impressed the judges and the audience. Yousuf Khan, a student of the University of Karachi, won the first place in the final of the Karachi Division. He will represent Pakistan in the final of the Chinese Bridge Division in China.