Chinese doctor: a beacon of hope to Pakistani boy

Chinese medical staff visit a Pakistani patient in his ward on June 2, 2022 at the Zhongnan Hospital of Wuhan University, China. [Photo provided to China Economic Net]

The boy was diagnosed with brainstem tumor several months ago. He needed a surgery as soon as possible.

However, brainstem tumor surgery remains the most challenging operations in neurosurgery. It demands meticulous preoperative evaluation, reasonable surgical plan and experienced surgical team. None is dispensable.

However, his surgery was too complicated to be performed in Pakistan.

His father Muhammad Arshad, a teacher of a university in Islamabad, Pakistan, turned his eyes to China where he had studied and got his doctoral degree on cognitive science at Tsinghua University, Beijing.

Arshad knows a lot about Chinese medical and healthcare capability and believes in the Chinese doctors’ techniques and skills.

His two Chinese friends recommended him professor Chen Jincao, a top expert on neurosurgery and also chief physician of ZNWU, one hospital of the first echelons in neurosurgery.

Arshad soon decided to take his son and wife fly to Wuhan China, putting his hope in professor Chen.

On May 11, Arshad Jr. was admitted to ZNWU, after the quarantine due to COVID-19.

Soon, Professor Chen called for a consultation with experts from about ten departments including pediatrics, oncology and chemoradiotherapy departments to discuss the best treatment plan for Arshad Jr.

The test results of Arshad Jr. came out; however, it was not very good.

“The tumor has invaded 80 percent of the brainstem, which is rare,” said Professor Chen. “It means the following surgery will be highly difficult and it also presents a tough challenge to the medical team,” Chen added.

Based on the consultation and thorough argumentation, Chen and his team decided to make a “three in one” surgery for Arshad Jr., which means to perform brainstem lesion resection, decompressive craniectomy and lateral ventricle intraperitoneal shunt synchronously.

Knowing the decision, Arshad said, “Professor Chen, I trust you completely. Just go ahead. I support the team’s decision.”

Arshad said he once considered performing the surgery to the USA and the European countries. However, when studying in China, he observed that the Chinese doctors had a large number of outpatient patients and surgeries.

So they had more practical experience than their counterparts in other countries. “I believed that the Chinese experts would provide the most effective treatment to my son,” said Arshad.

Professor Chen and his teammates said they would spare no pains to cure this little patient and try to “live up to the trust” of Arshad and his wife.

On May 17, Arshad Jr. underwent the “three in one” surgery, which lasted for six hours.

“The surgery is successful. It not only achieves the expected goal but also lays a foundation for the following treatment,” said Xu Chengshi, an associate chief physician of neurosurgery department, and a member of the medical team for Arshad Jr.

“Thank you so much! The Chinese doctors and nurses are so nice. Your efforts means a lot to my family,” said the boy’s father.

After the operation, Arshad Jr. had been treated in the ICU for seven days. Later, his situation was better, and then he was transferred to the general ward.

The little boy was put in a single ward to facilitate their living here.

A nursing team with English speaking nurses was arranged for better communications with Arshad Jr. and his parents.

ZNWU and the neurosurgery department both made a partial remission of fees for Arshad Jr. The medical staff also raise money for this boy.

Xu said, “It is our bounden duty to cure patients by our professional knowledge and skill. Besides, we hope to show our sincere care and bring warmth to our Batie (Pakistani iron brothers).”

On June 2, one day before the Dragon Boat Festival, Professor Chen, Xu and Hu Qin, the nursing supervisor came to the ward of Arshad Jr.

On seeing them, the boy greeted them with a wave.

But for Arshad Jr., a toy was more popular with him. When the nursing supervisor put the toy before Arshad Jr., excitement was shining in this little boy’s eyes.

Professor Chen said Arshad Jr.’s situation is getting better and encouraged the boy to continue to bravely beat the disease.

The parents of the little boy expressed that they would always appreciate the Chinese medical team’s professionalism and their care for humanity.

His father said, “It proved that my decision to take the surgery in China made several months ago was very correct.”

Xu added that generally speaking, a common surgery costs about $10,000 at ZNWU, which is lower than that in developed countries.

“We can provide good service and are willing to serve more patients including people from countries and regions involved in the Belt and Road Initiative (BRI), for the building of a community with a shared future for all mankind,” said Xu. 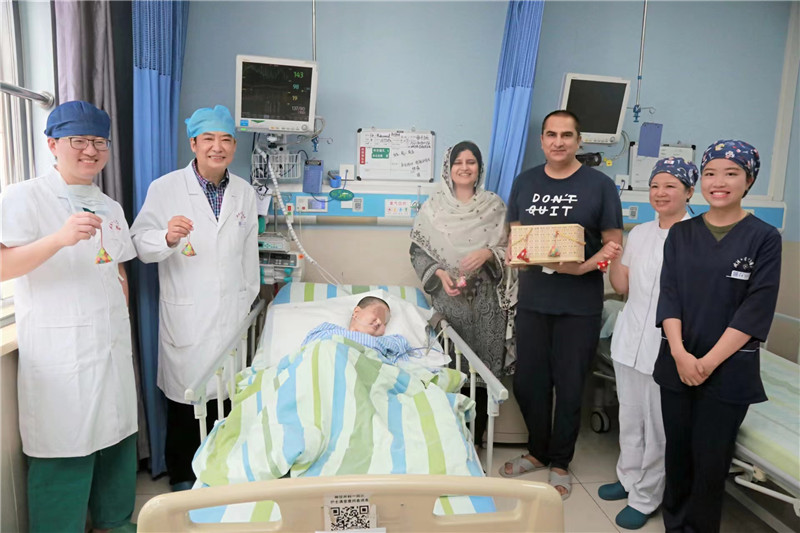 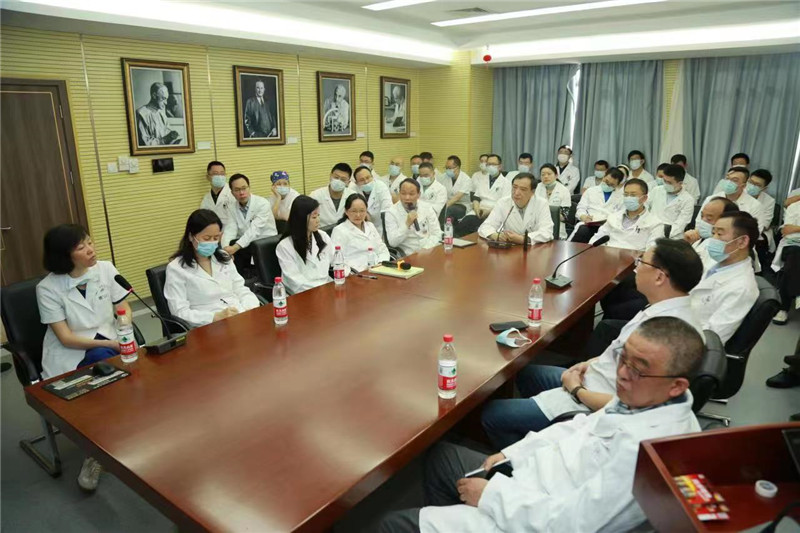 Professor Chen Jincao calls for a consultation with experts from about ten departments including pediatrics, oncology and chemoradiotherapy departments to discuss the best treatment plan for Arshad Jr. [Photo provided to China Economic Net]