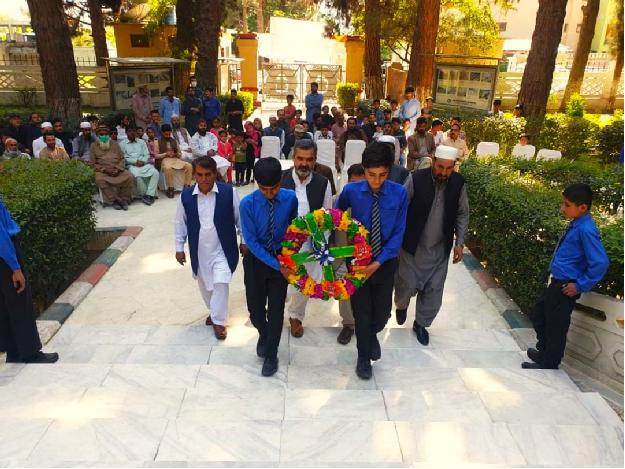 Floral wreath being laid at China Yadgar. [Photo/ OCAGB]
GILGIT, April 5 (Gwadar Pro) – Officials and locals from Gilgit-Baltistan on Monday paid tribute to Chinese workers and engineers who lost their lives about 50 years ago in the construction of Karakoram Highway (KKH).
The “April 4, National Mourning Day” was organised by Overseas Chinese Association Gilgit Baltistan (OCAGB). Officials, local notables and students were gathered at “China Yadgar”, the Chinese cemetery, located in Danyor, about 10 kilometers away from Gilgit city across the Gilgit Giver. The officials, locals and students laid floral wreaths on the graves of Chinese workers and engineers who laid their lives in the construction of KKH, also known as the Eighth Wonder of the World. Poems eulogizing the sacrifices and Chinese and Pakistani workers who laid their lives in the construction were also played.
“Fifty-four Chinese are buried in the cemetery; every year on April 4, we pay tribute to the Chinese workers and engineers at China Yadgar,” said Ali Ahmad Jan, a local from Gilgit, adding “China and Pakistan’s friendship is a perfect example of one soul and two bodies. We are together at grief and happiness”.
“Due to China's sacrifices, today our KKH is linked with China. This road is an integral part of China-Pakistan Economic Corridor (CPEC),” said an official. He said that China has always stood by Pakistan’s side at critical times.
"Grave-keepers of the Chinese martyrs of the cemetery in Gilgit were honored by the Embassy of the People’s Republic of China and by OCAGB,” according to a statement of OCAGB.