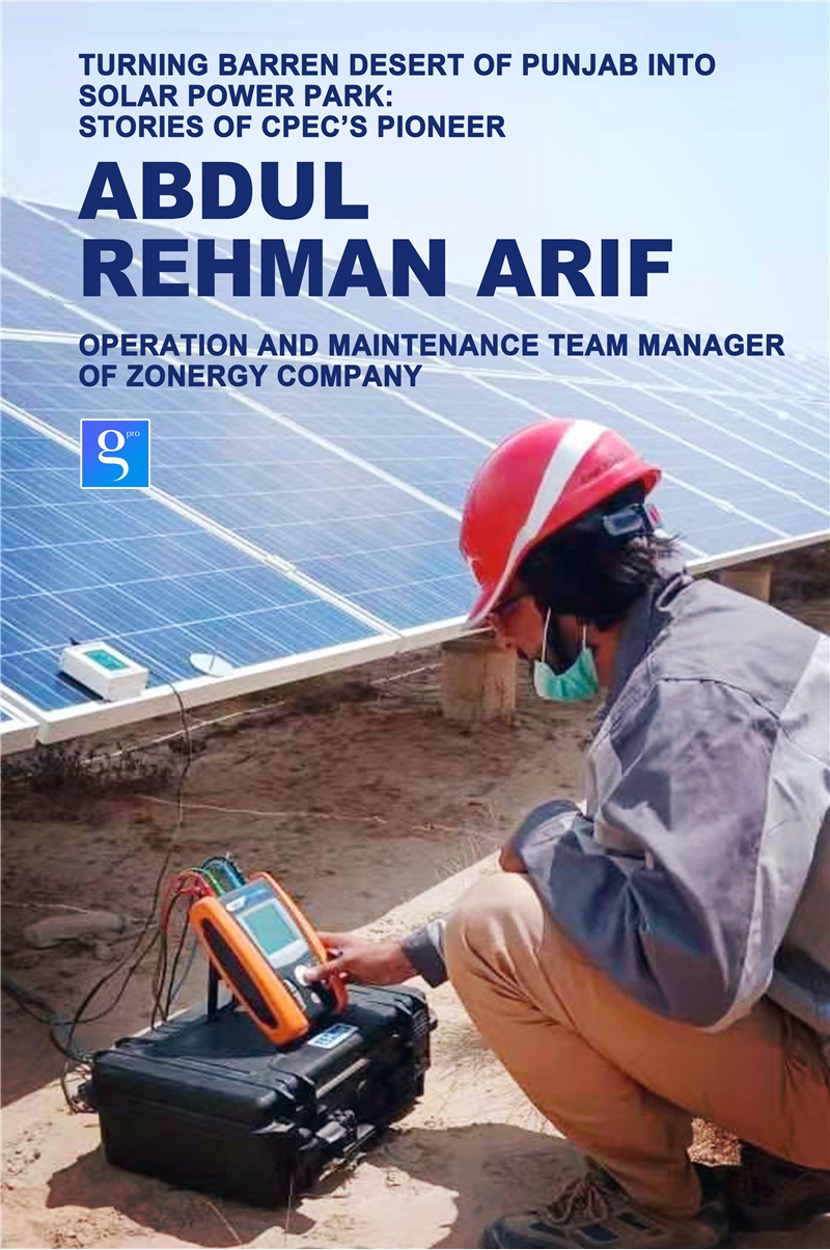 Since joining the company in June 2016, Abdul Rehman Arif has been appointed as operation and maintenance engineer and team manager in 2018 for his excellent performance. "When I read Zonergy Company's mission and vision, I can clearly see how my goals align with the purposes of the company. There's nothing I love more than when I am working with other engaged individuals towards a common goal," Abdul recalled excitedly.

"My whole experience is in the solar field, so I wanna continue in the same field. In addition to various allowances and benefits, Zonergy provides a health card that good companies are providing to their employees as the work in power sector is dangerous and a good company always pays attention to this," Abdul said proudly.

Zonergy plays an active role in the solar energy storage and supply business under the "Belt and Road" Initiative. The photovoltaic ground power station with a capacity of 900 MW in Punjabi, Pakistan was listed as one of the priority projects under China-Pakistan Economic Corridor (CPEC). 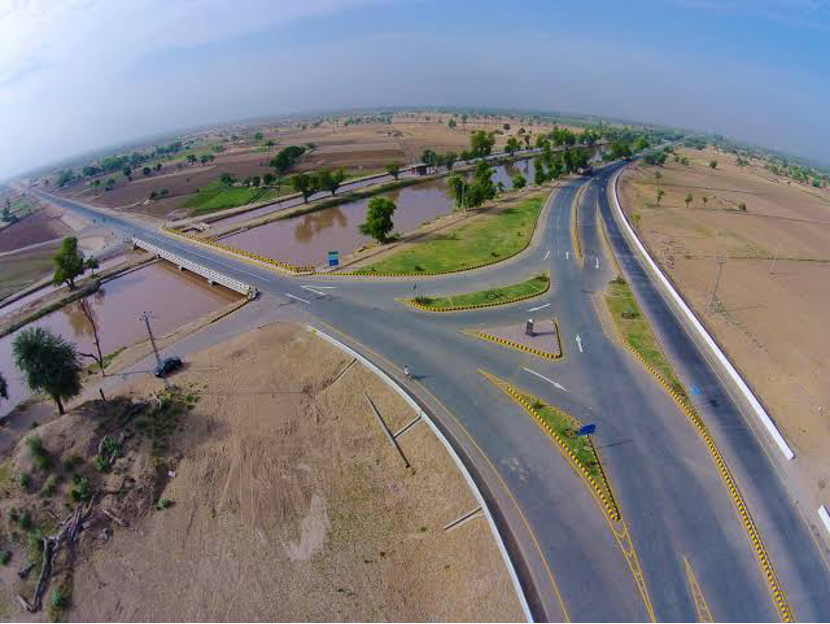 When asked what the project had brought to his country and hometown, Abdul first mentioned energy crisis. The solar park has been promoted as one of the largest in the world. Located in the Cholistan desert in east-central Pakistan, its original 100-megawatt plant produces about 150-gigawatt hours a year, enough to light about 100,000 homes in the country, according to the company.

Pakistan faces a year-round electricity shortfall that hits around 6,500 megawatts in the summer, the period of peak demand. Its urban areas often suffer blackouts for five hours or more a day on average, while rural areas can experience more power shortage.

"In addition to easing power shortages, our plant also generates clean and green energy. The clean electricity we provide to municipal facilities and residents can reduce community-wide greenhouse gas emissions," Abdul told the reporter of Gwadar Pro. The cumulative generation capacity of the PV station reached 2.4 billion kilowatt-hours in 2021 which is enough to satisfy the electricity demands of more than 200,000 local households, according to the company.

The Pakistani government plans to gradually increase the proportion of green energy in the total power generated in the future. Zonergy has become a pioneer in generating green energy in Pakistan. "People are now moving towards solar energy after seeing the production from this project," Abdul said. 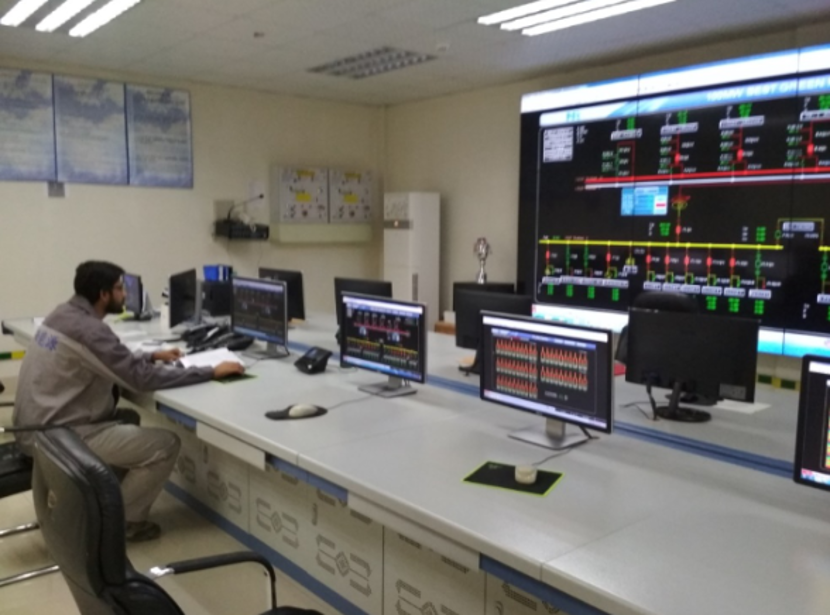 Radiating into nearby areas

"The project has created job opportunities for the people of southern Punjab. The nearby area is now developing day by day due to the existence of this project. It's not only important as its contribution in power sector, it's also significant because its presence improves the lives of surrounding people," said Abdul, adding that all the labor is from the community there, hundreds of people get employment and livelihood of their families improved likewise.

It has created roughly 5,000 jobs for locals since construction started, and trained more than 100 operation and maintenance engineers to work in PV power stations, according to Zonergy.

"Even now, labor for washing PV modules and other work is preferred from nearby areas. It's a handsome way for our people to earn. Previously, people didn't have awareness of energy from solar panels, now people living near the project are using solar energy for running tube wells for agriculture," said Abdul.

"My attachment to the solar park is from 2016. I look after this project like a father taking care of his children and I felt so happy to see that now that little child has become so big. The journey started with 100 MW and hope I will see it cross 1,000 MW. The whole time spent here was amazing and unforgettable," Abdul said sincerely.

Touching on his Chinese colleagues, Abdul said he was truly humbled by their efforts. "Chinese employees stay here for 11 months a year and have only one month holidays. Living here away from their families and culture is a huge sacrifice on their side. Moreover, they have issues in understanding our language, so they always keep trying to learn Urdu as well as English. Pakistani employees try to cheer them up with local festivities and keep them here like their family."

Together, they withstood the rainy season, scorching summer, sandstorms and other challenges. While meeting the challenges together, the Chinese and Pakistani brothers supported and stood alongside each other in trying times.

"Isn't it beautiful seeing two countries bonded with such a strong friendship? This feeling actually always makes us proud of having them as our neighboring country. CPEC is the hope of a better future with peace, development and growth of economy. It will provide new opportunities, new vision as well as new impetus to China-Pakistan relations. I'm proud that I'm part of it. May Pak China friendship live long," said Abdul.