According to Chinese customs, China's import of major aquatic products from Pakistan (HS Code 03) reached 153 million US dollars in 2021, up 9.8 percent year on year, From ribbon fish, croakers, cuttle fish, to shrimp, crabs, and lobsters, China is the largest destination of Pakistan's aquatic export.

“Fisheries is a big and emerging industry in Pakistan”, said Dr. Saeed Murtaza Hasan Andravi, Director Animal Sciences Institute NARC, Islamabad. It accounts for less than one percent of GDP, but provides vast employment opportunities for under-developed in Pakistan. Moreover, it can be a profitable profession and a promising means to earn foreign exchange.

Pakistani people are expecting more from the abundant aquatic resources, especially amid the pandemic. Data from Pakistan Bureau of Statistics show that Pakistan exported $200 million of fish products in the first half of FY2021-22, up 3.18% year-on-year. “We can increase it to 1 billion dollar”, said Muhammad Zafar Kundi, Chairman of Pakistan Fisheries Export Association. 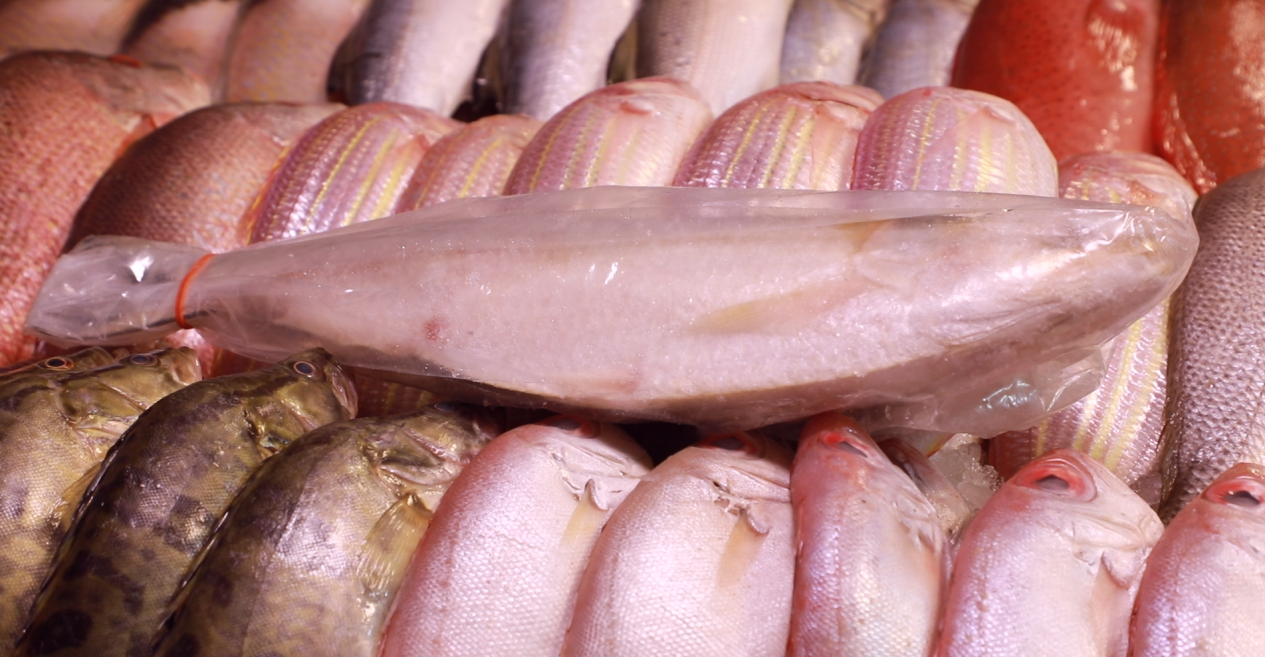 Suhail Firdous is the owner of Super Star Enterprise, a seafood processing plant with its main customers in the Middle East and Far East. “China mainly consumes 7-8 kinds of fish like abalone, squid, octopus, etc. 70% of our fish are sold to Tianjin, China”.

Suhail Firdous observes that Chinese market is more friendly because the customers focus on the quality instead of the package. In contrast, access to European and American markets require troublesome certification. “China is the pillar of our export. It is an easily accessible market”, he explained.

Since hitting a ten-year peak in 2019, Pakistan's exports of aquatic products have been on the decline, but its exports to China have been rising steadily. Chinese customs data show that Pakistan's exports of major aquatic products (HS Code 03) to China grew 9.3 percent year-on-year in 2021, and 7.4 percent year-on-year even in 2020, when the epidemic broke out.

Amid the epidemic, China has become Pakistan's largest export destination for aquatic products, accounting for more than 30 percent of its total exports. 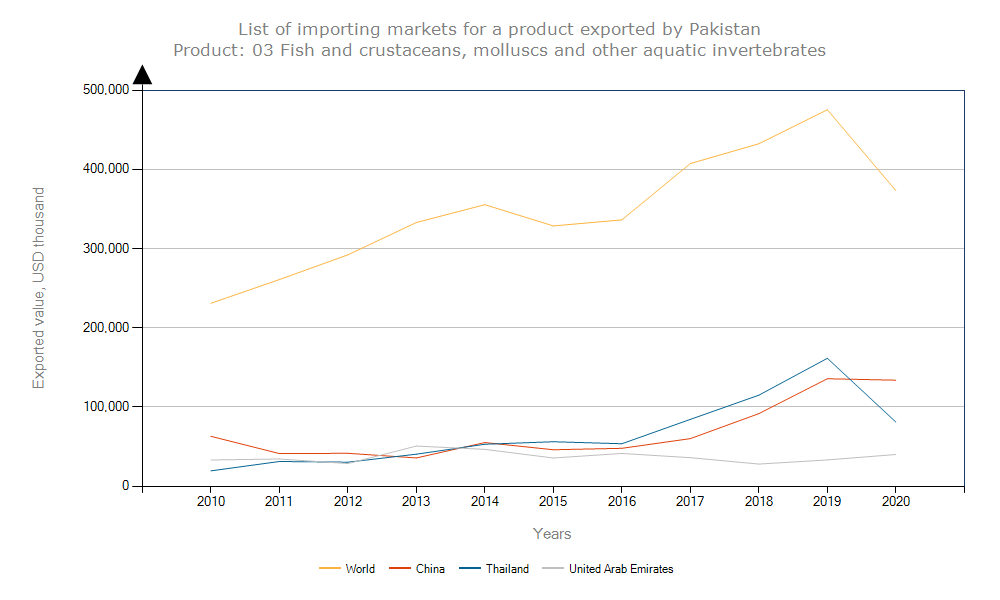 Whether Pakistan can further export its aquatic products to China depends on two aspects: production and price.

But the reality is harsh. A net, a boat, and an engine--these are all the tools used by some for fishing. Unequipped by modern devices, fishermen are restricted by unpredictable waters and weathers. Engines can be damaged, wind may blows fast, the net can get torn, boats get broken, people get drowned... “We sometime go deep into the ocean. If we are unable to find fish, then we have to bear the losses”, complained a fisherman based in Karachi.

Even if fishermen catch the fish they want, they still face the challenge of transporting them to the market while maintaining their freshness. “Fishermen can't afford the refrigerating equipment on board”, said Muhammad Zafar Kundi. Lack of storage facilities is preventing Pakistani fishermen from earning higher incomes. Statistics show that over 60% of the captured fishes are wasted as they have already dead by the time they reach the market and can only be sold as fish meal. The United Nations estimates that Pakistan is losing $60 million annually due to low-value cost.

Nurturing professional cold chain logistics companies that acquire aquatic products directly on the sea may be a solution. In China, too, fishermen used to bring back the fish caught by themselves before professional cold-chain logistics companies gradually emerged that directly purchase aquatic products at sea at the same price as those at land ports. “The companies are more professional than the fishermen. They have bigger boats and complete refrigeration facilities”, introduced Cui He, president of China Aquatic Products Processing and Marketing Alliance.

To improve the output of aquatic products, aquaculture is another important way apart from fishing.

But in recent years, the growth rate of aquaculture production in Pakistan has been slow. According to Dr. Rehana Kausar, Senior Scientific Officer of the Animal Sciences Institute NARC, Islamabad, most of Pakistani farmers “prefer to have a conventional farming system”. “Our biggest issue is fish disease diagnosis and control. The lack of data makes it difficult to identify the types of diseases and emerging diseases, leading to increased fish mortality.”

“We are conducting cooperation with Pakistan. China provides breeding technology, seedlings and production materials to meet the needs of Pakistani fishermen”, said Cui He.

“For the past two or three years, we have been working closely with a Chinese fisheries research institute to introduce Chinese breeding techniques and species such as trout”, said Dr. Rehana Kausar, “When the epidemic is brought under control, we will ship golden trout germplasm from the institute so that Pakistani fishermen can obtain varieties with good genetic quality”.

China boasts world-class aquaculture technology. According to China's Ministry of Agriculture and Rural Affairs, China produced more than 50 million tons of farmed aquatic products in 2020, accounting for more than 60% of the world's total aquaculture output. There are more than 300 kinds of aquaculture in China, and the annual per capita amount of aquaculture products is 37 kg, twice the world average.

To increase Pakistan’s inflow of foreign exchange from aquatic products, in addition to expanding the output, another feasible path is to enhance the added value of aquatic products through processing. 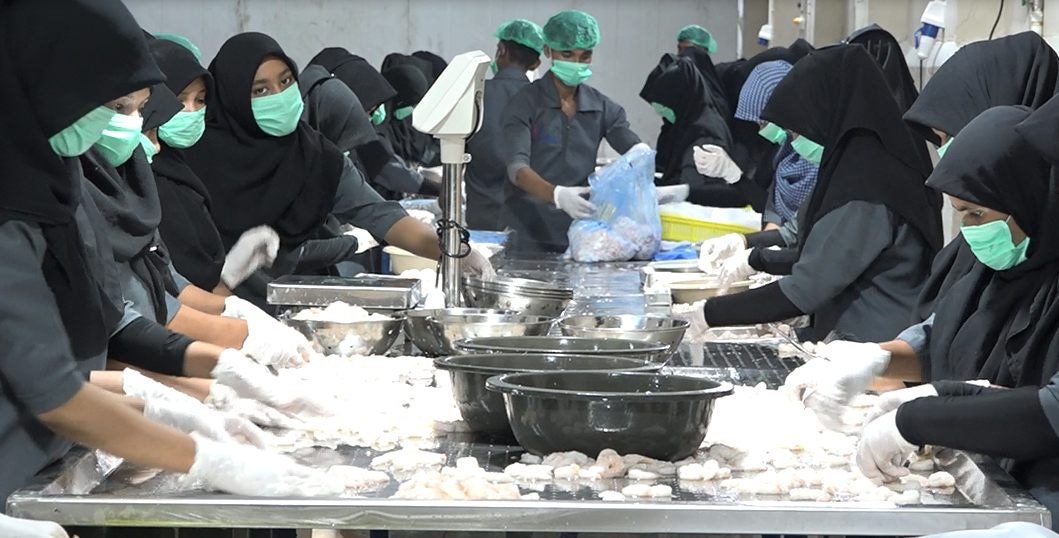 According to statistics, Pakistan has been exporting seafood at an average unit price of less than $2.50 per kg from FY2018-2021. By contrast, export prices from other countries in the region stand at least twice that much.

“At present, what we export most is raw seafood materials. The processing industry is yet to be developed, the main reason of which is lack of capital, such as imported machinery and equipment needed for processing”, said Muhammad Zafar Kundi.

For instance, after fishermen caught fish, they are not able to package them in a proper and professional way. Bashir Mahmood, a fisherman in Gwadar, told journalists that they catch an assortment of fishes including Tuna, Sarai, Ribbonfish and Bangra, and their business is worth hundreds of thousands of Pakistani rupees a day, but in Gwadar they can only pack small fish. “There is no factory to pack big fishes like tuna for export to Europe and other Asian countries. We can only transport them by sea and sell them to Iran. I hope there will be tuna packing plant in Gwadar.”

As the processing hub of aquatic products, Karachi faces such problems as high electricity tariff and inadequate equipment. Electric charges from refrigeration can take up 58% of the total expense of the factory.

In this regard, Muhammad Rafique Awan, CEO of Hei5 International Food Pakistan, offers three recommendations: First, as aquatic products are export-oriented, he suggests that the Pakistani government can provide subsidies for electricity charges. Secondly, it is advised that processing plants use the latest automatic machinery and equipment to reduce power consumption and costs. But he concedes that the latest machinery is scarce, while imported equipment comes with high expenses and taxes. Therefore, some manufacturers are willing to use refurbished compressors imported from China. Third, the processing plants should conduct research on the rapid freezing technology based on nitrogen, so that the products can be frozen quickly with quality maintained.

How can China and Pakistan cooperate in the field of fishery processing?

In the interviews with Chinese and Pakistani industry insiders, we clearly see the international division of labor in aquatic product processing industry. From Pakistan to China, and then to Europe and America, aquatic products turn from raw materials to intensively processed semi-finished products, and ultimately to products with high added value.

“We export raw materials to China, then Chiense factories reprocess and change the packaging to export to Europe and America and make a profit”, said Muhammad Zafar Kundi.

However, the value chain of processing did not end in China. According to Cui He, Europe and America stood at the higher end of the value chain. For example, glucosamine hydrochloride extracted from lobster shells in China is sold to the United States in a 20-kilogram barrel. After being processed by American companies, it is turned into a health care product sold at $5,000 a barrel. “We buy a lot of health products from the US and Canada, but in fact most of the ingredients are provided by China”, he said.

“China leads the world in the intensive processing of aquatic products and is the only country that can effectively use all fishery wastes”, said Cui He, “for exmaple, while fish is consumed, its scales are made into collagen. In addition, the body of the shrimp is edible, and the head shell is processed into chitin, a substance widely used in fabrics, pesticides and more”.

He analysed that the current scale of China's deep processing industry is determined by China's industrial market and demand. China is the largest producer and consumer of aquatic products. "Deep processing in some developed countries may not surpass ours, because they do not have the industrial base of China."

In the international value chain of aquatic product processing, the international division of labor among various countries actually originates from and is limited by their own resource endowment and comparative advantages.

So, can China and Pakistan cooperate in the field of aquatic products processing? How?

Cai Fang, Vice President of Chinese Academy of Social Sciences, proposed "International Version of Flying Geese Model" based on the concept of comparative advantage. It refers to joining the "flying geese model" through infrastructure construction, human capital improvement, business environment improvement, foreign investment and mobilization of own resources in countries with potential demographic dividend, abundant labor force, relatively low wages, and skills to meet specific requirements throughout the industrial chain. The Belt and Road Initiative has created such an opportunity, and Pakistan is a possible testing ground.

At the government level, as the China-Pakistan Economic Corridor (CPEC) has entered its second phase, the infrastructure construction in the previous stage has laid a solid foundation for attracting international capital and undertaking industrial cooperation. Chinese Ambassador to Pakistan Nong Rong said during an interview at the 10th Joint Committee meeting of CPEC that China will support the development of the fishery processing industry in Baluchistan and other regions, help local people improve labor productivity and increase farmers' income.

At the industrial level, as the labor-intensive primary processing industry loses its comparative advantage in China, Chinese enterprises are actively shifting outward. Cui said many Chinese companies have invested in Southeast Asia and other regions to build factories, such as breeding bases and feed mills, and cooperate with local breeding technologies and germplasm resources.

Cui he expressed some concerns about the possibility of Chinese enterprises investing in Pakistan. Where will the market be after they invest in Pakistan? If it can't be digested locally, can it be shipped back to China? Are there cold storage, processing plants, cold chain logistics? “As far as we know, it may not be a viable option.”

Suhail Firdous, owner of Super Star Enterprise, a seafood processing plant, offers another perspective. He finds that the Chinese are very interested in investing in Pakistan and several fishery companies are making preparations. “Now we export a lot of fish to China, where it is reprocessed and then exported around the world. But Chinese investors can allocate the processing factories to Pakistan as the labor here is cheaper than in China and the raw materials are fresh without the extra cost of shipping”. He believes that if the two governments can strengthen communication and enhance the confidence of Chinese enterprises in investing in Pakistan, Pakistan's aquatic product processing industry will gain huge technological advantages.

While CPEC has brought development opportunities, it will take time to verify whether Pakistan can successfully join the "flying goose model".