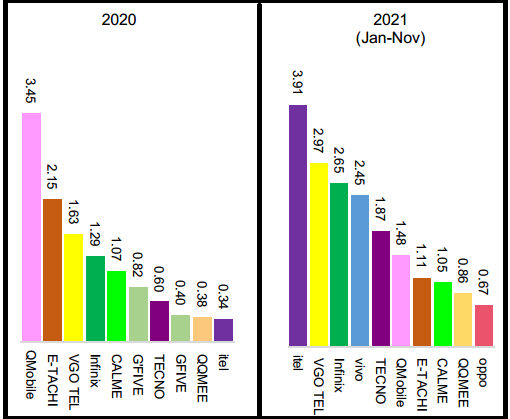 According to Pakistan Telecommunication Authority (PTA), during Jan-November 2021, the production of mobile phones by local manufacturing plants was 22.12 million while the imports remained at 9.95 million. In 2020, the number of locally manufactured mobile phones was 13.05 million against the hefty 24.51 million imports.

According to PTA’s data, currently, in Pakistan, the number of mobile 2G devices on the Pakistani network is 48 million while 52 million are smartphone users.

In November 2021, Xiaomi, a Chinese mobile giant, announced a partnership with Airlink Communication to start manufacturing smartphones in Pakistan. The company will start manufacturing in the first quarter of 2022 and will produce 2.5 to 3 million handsets per year.

According to experts, in 2022, more than 90% of cellphones sold in the country will be “Made in Pakistan” and Pakistan will soon become one of the major exporters of cellphones.