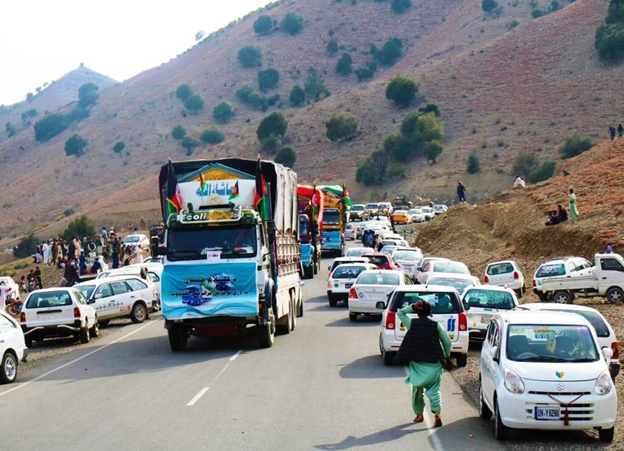 Pakistan provides shortened transit route to Afghanistan and beyond. [Picture by @AmbassadorSadiq]

ISLAMABAD, Sept. 25 (Gwadar Pro) - As Kabul is struggling to keep its economy afloat, Pakistan has abolished taxes on the imports of fresh fruit other than apples from Afghanistan.

“Sale tax shall not be collected on fresh fruits imported (except apples PCT 0808, 1000) from Afghanistan,” reads the Federal Board of Revenue’s notification issued on September 24.

Afghanistan is famous for producing high-quality fruits like grapes, pomegranates, apples and melons etc. Earlier, fresh fruit imports from Afghanistan to Pakistan were taxed at around 5%. “It is the right decision at the right time. It will reduce taxes on Afghan traders and will bring down the prices of fruits in Pakistan as well,” Shahid Hussain, former vice-President of Sarhad Chamber of Commerce and Industry told Gwadar Pro.

According to Mr. Hussain, Afghanistan and other landlocked central Asian countries should fully utilize the ports of Gwadar and Karachi for transit trades with the rest of the world.

After the capture of Kabul on August 15, in addition to maintaining public order, the economy is a major stake for the Taliban to manage the affairs of the country. According to the United Nations, half the people of Afghanistan are already vulnerable and by next year, almost 90% of the people in Afghanistan will go below the poverty line.

Syed Wiqas Shah, senior Pakistani journalist and Expert on Af-Pak Affairs said that it is a critical time for Afghanistan and the neighboring countries to help Kabul. “Slowly and gradually business activities are resuming in Afghanistan. It is time to make the Afghan brothers economically strong, so that they can stand on their own feet,” Mr. Shah told Gwadar Pro.