ISLAMABAD, August 11(Gwadar pro)- In a major step towards the development of the Rashakai Special Economic Zone, the government approved applications of 9 investors for a total of 25 acres of land in the flagship industrial estate of China-Pakistan Economic Corridor (CPEC).

The applications were approved during second meeting of the Rashakai SEZ Committee held in Islamabad on August 10, the KP Board of Investment and Trade (KPBOIT) revealed in a tweet. KPBOIT is responsible for promoting industrialisation and trade potential in the KP province.

According to Arbab Haroon, spokesperson for KP Economic Zones Development and Management Company (KPEZDMC), the following firms have been awarded land in the Rashakai SEZ.

GEO Crete Absolute Construction Co. has been awarded 2 acres of land. The company will manufacture a chemical to stabilise land for construction of roads, buildings and other structures.

One acre land has been awarded to Gul Steel, a local manufacturer of construction steel, while 10 acres have been allotted to Wah Nobel, a chemical manufacturer.

Moreover, the committee approved application of Pak Asia Automobile Co. for 2 acres of land while 2 acres of land was awarded to Sadiq and Sons, manufacturers of leather gloves and other sports materials.

Interlink Communications also got a 2-acre plot while Itemad Oil and Ghee company got 4-acre plot.

Gold Featherz, a local trade consultant was awarded one acre plot while Phi-Orion Trading also got one acre plot. 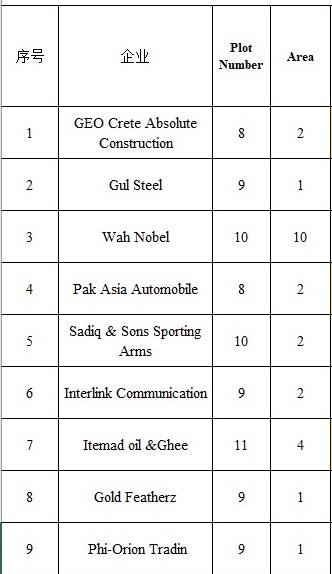 It is pertinent to mention here that Chief Minister Khyber-Pakhtunkhwa (KP) Mehmood Khan had directed the authorities to expedite the process of evaluation of the applications for industrial plots in the Rashakai SEZ.

So far, only Century Steel, a Chinese steel manufacturer, has started construction work on a 40-acre plot in RSEZ. The SEZ is being developed and marketed by China Road and Bridge Construction (CRBC) company. The SEZ is expected to provide 250,000 direct and indirect jobs upon completion.