GWADAR, July 6 (Gwadar Pro) - As promising changes are taking place in the booming area of Gwadar, Pakistani Prime Minister Imran Khan paid a visit on Monday to the coastal city, reviewing progress on various development projects and witnessing the signing of Memorandums of Understanding (MoUs).
During the one-day visit, the Prime Minister performed the groundbreaking of the Gwadar Free Zone Phase Two and launched many projects such as Gwadar Fertiliser Plant, Gwadar Animal Vaccine Plant, Henan Agricultural Industrial Park, Hengmei Lubricants Plant, and Gwadar Expo Centre. The MoUs signed during the visit included an implementation agreement of a 1.2 million gallons per day desalination plant and solar generators granted from China for south Balochistan.
These programs, also seen as deliverables of Gwadar, present the continuous exploration and efforts of the Chinese enterprises and the local community over the past eight years since the official initiation of the China-Pakistan Economic Corridor.

Dating back to 2013, Gwadar Port was on the verge of desolation with obsolete facilities, barely surviving the seaport business. Since China Overseas Port Holding Company (COPHC) took over the port, the infrastructural work has been complete with three 20,000-ton multi-purpose berths (a structure reserved for 50,000-ton berths) and a storage yard of 140,000 square meters. Gwadar Port can handle various types of cargo, such as containers, bulk cargo, groceries and ro-ro ships. 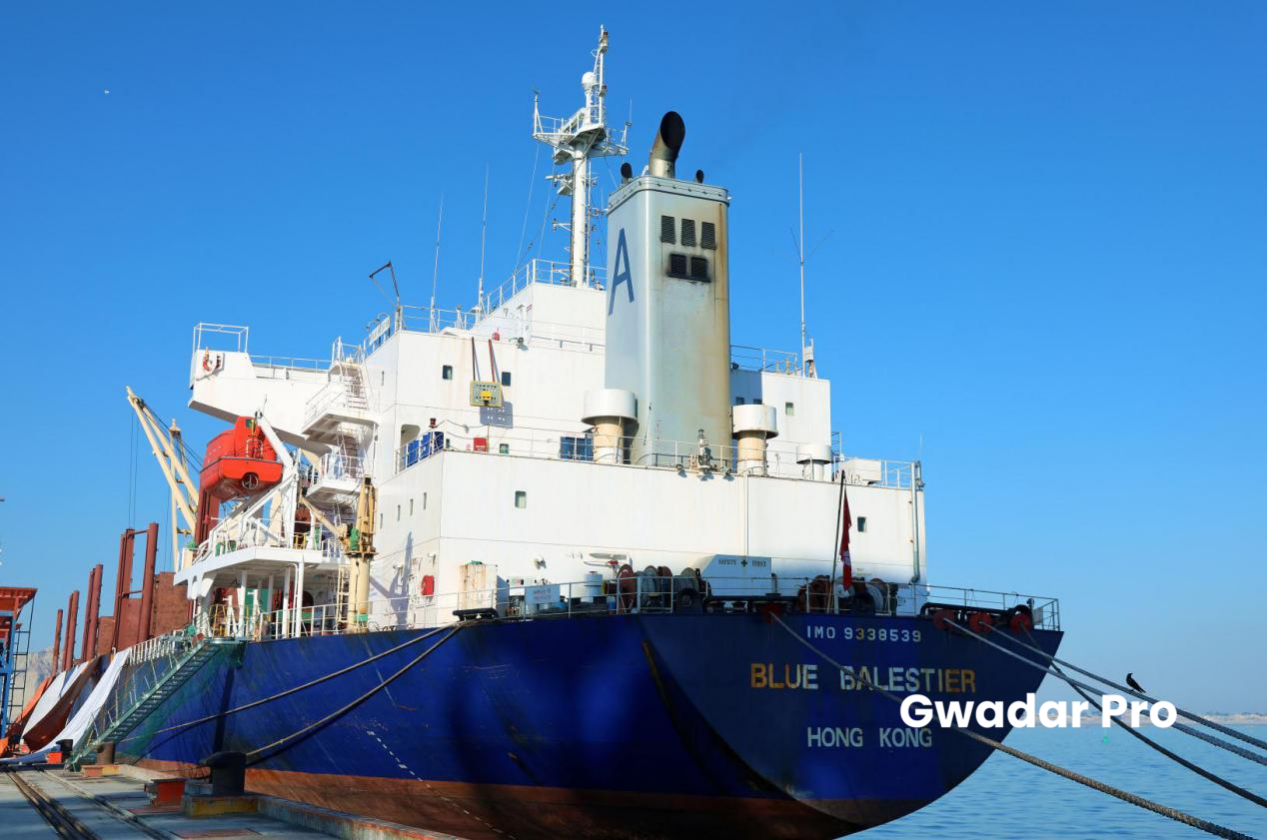 On January 14, 2020, when a whilst blows into the dawn of the Arabian Sea, Gwadar Port greeted the first ship from Dubai's Jebel Ali Port to Afghanistan, marking the first operational use of Gwadar port for major trade activities under the Afghanistan-Pakistan Transit Trade Agreement (APTTA). The consignment unloaded at the port will be then transported to Afghanistan in trucks through the Pakistani border town of Chaman.
Since then, the seaport has been busier with LPG ships and a dozen vessels carrying fertilizers, urea bags, and other goods from Dubai, UAE, Australia, and other countries shuttling back and forth for transit to Afghanistan. As per an interview with the Chairman of CPEC Authority Asim Bajwa, during the last few months, over 67,000 metric tonnes of cargo have been handled at the port.
The successful operation of Gwadar Port transit trade to Afghanistan also lays the foundation for expanding this trade network to Central Asia and Russia and further cemented by an agreement between COPHC and COSCO Shipping Lines signed in 2018 to launch the Gwadar-Gulf Express. The deal ensures that Mina Jebel Ali, Karachi, Qasim, and Abu Dhabi, as transit ports along COSCO’s 16 international lines, will be ready to serve global customers, and Gwadar Port would connect almost all large ports in the world.
Port Economy driving infrastructural development in the area

Located just a few miles from the port, Gwadar Free Zone, the first modern industrial park in Pakistan, has also seen some significant investment and developments in this area lately. An official from COPHC told Gwadar Pro that more than 40 enterprises involved in hotels, banking, logistics, overseas warehouses, grain and oil processing, and fishery processing have registered at the free zone, bringing in a total investment worth U.S. $90 million.
With complete and advanced facilities, the free zone has been capable of holding large-scale international conferences since 2018, transforming the once-backwards fishing port into a city bustling with entrepreneurs, scholars, and politicians from all over the world. The GWADAR EXPO 2018, the Asian Parliamentary Assembly, the second Gwadar International Commodities Fair, and Gwadar Marble & Minerals Expo, while attracting the world's attention to Gwadar Free Zone, have brought more business opportunities to the area and promoted exchanges between people of different regions. 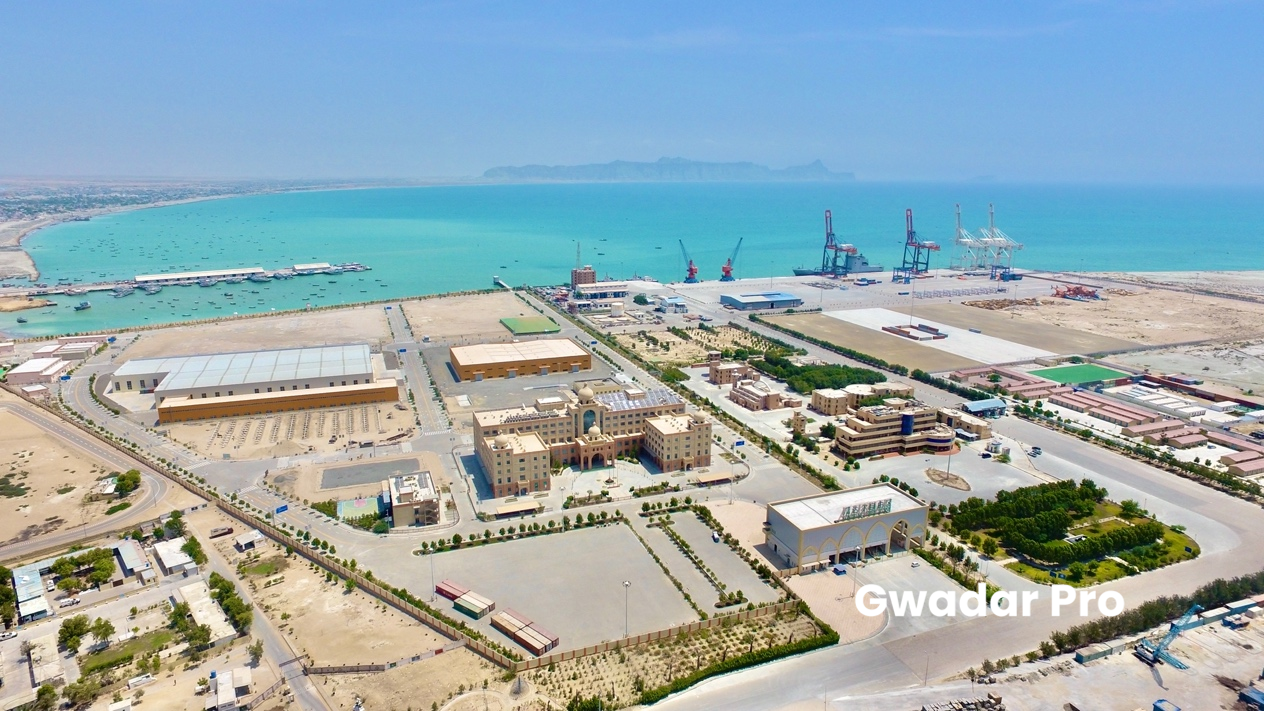 The thriving port and free zone have driven the infrastructural development of Gwadar city as a whole. For example, the East-Bay Expressway under the CPEC project, linking Gwadar Port with the Mekran Coastal Highway (N-20), the main artery of the national highway, will directly take cargoes from the port to M-8 for onward shipment to Karachi and the rest of the country, replacing the narrow 16-feet wide thoroughfare of Gwadar town at the West-Bay. An official notice of CPEC Authority reads that 94 per cent of the work on the six-lane motorway has been completed and would be inaugurated in October this year, bound to create a business boom by then for this coastal city.
In addition to the changing transportation status in Gwadar, severe power shortage in the area is expected to be alleviated as the long-awaiting 300MW coal-fired power plant has started construction lately and due to be functional by October 2023. Once put into operation, the power plant would be sufficient to meet the in-process construction needs and future electricity demands in Gwadar.
Prospects of improving livelihood of the local community

Economic and industrial development and improving livelihood and social progress are of equal importance for CPEC projects. The shortage of drinking water had long been a challenge confronted by local residents. To address the problem, COPHC built a smaller desalination plant in 2018 and agreed with the local government to provide 300,000 gallons of fresh water a day to the local communities. In a 2020 interview, Chairman of COPHC Zhang Baozhong said that the agreement has been amended to increase the water supply to 1.5 million gallons per day.
The Gwadar Faqeer Primary School, constructed with donations from the China Foundation for Peace and Development, is yet another proof of the CPEC’s effort in improving people’s well-being. The school provides educational opportunities to more than 400 children from around 6,000 families nearby and has shot to fame with the highest pass rate in Balochistan. In light of its success, the fourth meeting of the Joint Working Group on the CPEC in August 2019 decided to expand the primary school to Gwadar Faqeer Public Middle School, with teachers increased to 15 and the number of students nearly 600. 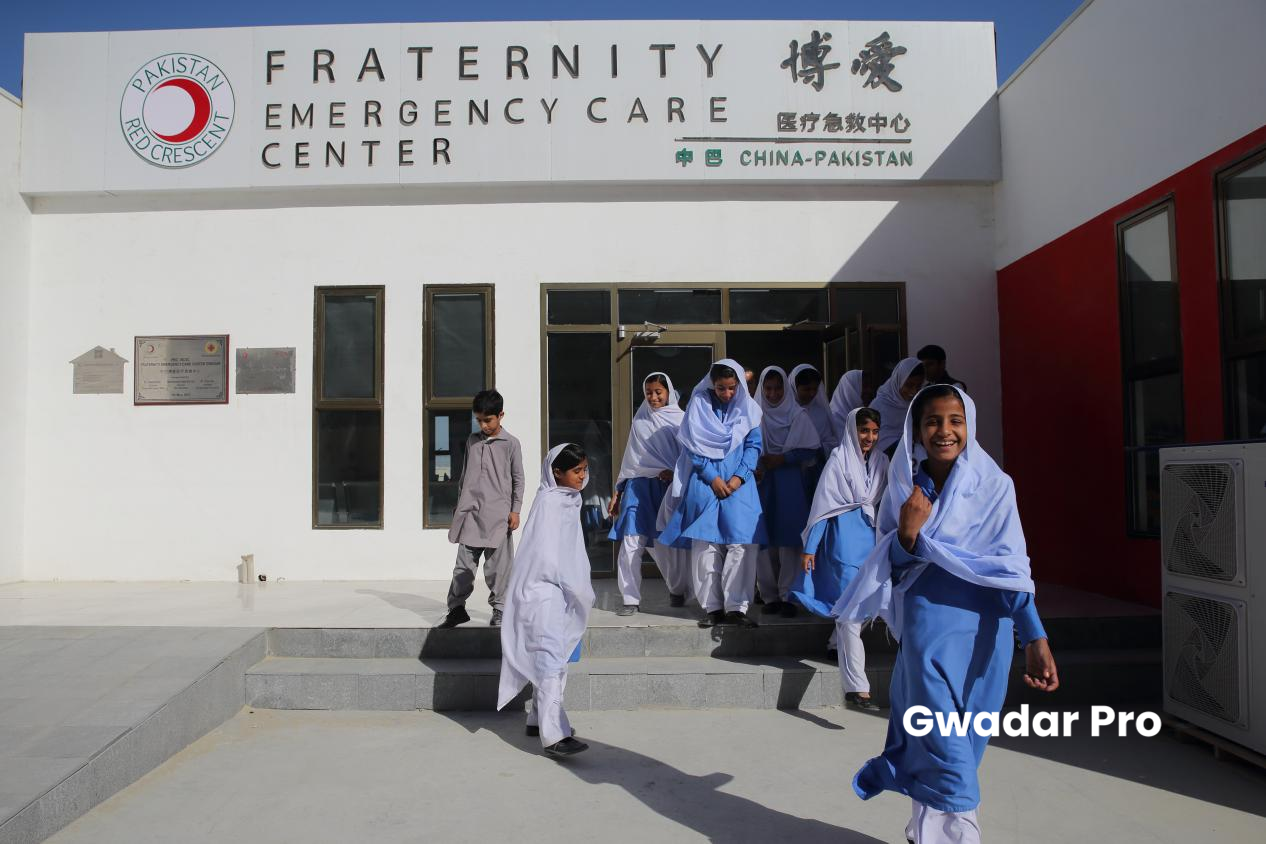 In terms of health service in Gwadar, the China-Pakistan Fraternity Emergency Care Center, which was a gift from the Red Cross Society of China to Gwadar, has become a major healthcare centre for the locals. Four medical assistance teams sent by the Red Cross Society of China had been to the centre in Gwadar since 2017, providing local people and Chinese workers with free physical examinations and nutrition and health consultations on a volunteer basis.
Green development is the goal of the Pakistani government. Echoing the “100 tree tsunami” campaign of the government, COPHC has been promoting the “Green and Clean Gwadar” program over the past two years and established a production base with an annual capacity of 500,000 tropical plants suitable for the local climate and soil with the guidance of the Chinese Academy of Sciences and Henan Yulin Holdings. In 2019, COPHC began the planting scheme of the Pak-China Friendship Green Park and reaped fruitful results in August 2020 with nearly 100,000 trees, shrubs, and flowers blossoming in the park, covering almost 50 per cent of the free zone.

The progress achieved in Gwadar over the past eight years is a prelude to a brighter future. With the newly signed programs for the development of this area during Imran Khan’s visit, people are expecting to meet a better Gwadar in years to come.