People were told that the Western system of democracy is the best way for social progress, and yet what the CPC has achieved proves that there is another feasible model, said Pakistani Prime Minister Imran Khan.

ISLAMABAD, July 1 (Xinhua) -- China, under the leadership of the Communist Party of China (CPC), has made remarkable achievements such as the eradication of absolute poverty, said Pakistani Prime Minister Imran Khan.

In an interview with Chinese media at the Prime Minister House on Tuesday, Khan lauded the CPC's efforts to score a complete victory in China's fight against poverty.

"This is, I think, one of the most remarkable achievements of any human society. I don't think there is any precedent in history of a society achieving these great goals," he noted.

Extending his congratulations on the 100th anniversary of the CPC, the Pakistani prime minister described the party's governance of China as a unique model.

People were told that the Western system of democracy is the best way for social progress, and yet what the CPC has achieved proves that there is another feasible model, he said.

As the prime minister of Pakistan and chairman of the country's ruling Pakistan Tehreek-e-Insaf party, Khan has paid several visits to China in the past few years. He said that the CPC's system of talent selection and grooming as well as its long-term planning for the development of China have impressed him.

Climate change, Khan said, is one of the most serious challenges facing mankind. And the CPC has been upholding the idea of the building of a community with a shared future for mankind and leading China to do a large amount of work in protecting the environment and tackling climate change. 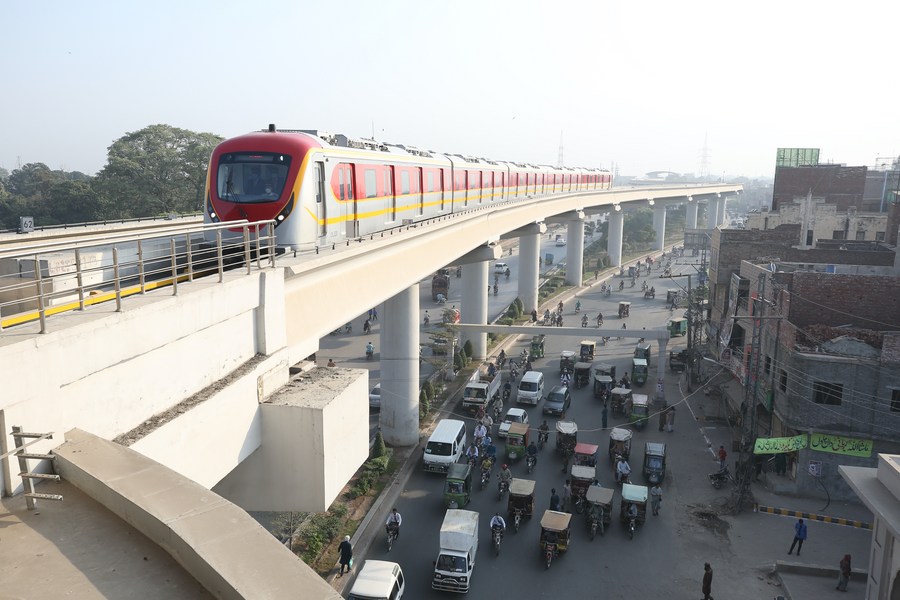 A train for the Orange Line arrives at a subway station in Lahore, Pakistan, Oct. 26, 2020. (Xinhua/Liu Tian)

On Pakistan-China relations, Khan said that since the establishment of diplomatic ties seven decades ago, the two countries have been walking shoulder to shoulder through difficulties, and have forged a very deep, strong and unique relationship which is not limited between the two governments, but also exists between the two peoples.

He said that whenever Pakistan is in trouble, the Chinese side will always extend a helping hand. "The people of China have a special place in the hearts of the people of Pakistan. Because you will remember a friend who stands with you in your difficult times as in good times, everyone stands with you."

In the fight against COVID-19, China has not only performed exemplarily within the country, but also helped many other countries including Pakistan control the epidemic through vaccine donation and other ways, Khan said.

Hailing the vaccine donation by China as a timely help, he said that his country was able to kick off the nationwide vaccination drive because of the vaccine doses from China to vaccinate frontline health workers and senior citizens in the first phase, "which gives us a lot of confidence."

As a landmark project under the China-proposed Belt and Road Initiative, the China-Pakistan Economic Corridor (CPEC) has been fruitful in solving Pakistan's electricity shortage and improving the country's transport infrastructure, the Pakistani prime minister said.

The CPEC is "a program which gives us the greatest optimism and hope for our future economic development," he said, adding that Pakistan will deepen industrial, agricultural and skill training cooperation with China in the future.

Pakistan will attract companies from China and other countries to invest in the special economic zones under the CPEC through incentives to create jobs and bolster economic growth, Khan said.

Pakistan will further strengthen its relations with China in the future, including political and economic and trade relations, he said, adding that no matter how the world situation changes, the Pakistan-China relationship will remain rock-solid.