This is a historic moment for the peoples of Pakistan and China. Our two countries are celebrating the 70th anniversary of the establishment of diplomatic relations, and China is celebrating the 100th anniversary of the founding of the Communist Party of China. On this landmark occasion, I congratulate the governments and peoples of the two countries.
Longstanding ties between our peoples date back to the ancient Silk Road, when traders, academics, monks, and ascetics like Fa Xian and Xuan Zang traversed treacherous Karakoram Mountains and laid the foundation of beneficial interactions and exchanges between the Chinese civilization and the Indus Valley civilization.
Pakistan was the first Muslim country to recognize the People's Republic of China in 1950 followed by the establishment of formal diplomatic relations a year later. Over the past seven decades, our fraternal relations have withstood the vicissitudes of time, and grown from strength to strength, unaffected by changes in the regional and international environment. With unrelenting efforts of successive generations in the two countries, our relationship has transformed into an "All-Weather Strategic Cooperative Partnership."
During this momentous journey, Pakistan became the most vocal supporter of the lawful rights of China in the United Nations. It also facilitated the famous "secret" visit of Mr. Henry Kissinger, the then US National Security Advisor, to Beijing in 1971, which became the harbinger of Sino-US rapprochement. This July marks the 50th anniversary of that seminal development, which had a decisive impact on East-West relations.
The Pakistan-China relationship is characterized by deep mutual trust, understanding and commonality of interests. This unique, time-tested, and ironclad brotherhood has scaled many peaks. We support each other in our respective core interests. Pakistan has always upheld the "One-China Policy" and supported China on Taiwan, Tibet, Xinjiang, Hong Kong, and South China Sea issues. China has stood by Pakistan in supporting our key strategic, economic, and developmental priorities. The people and government of Pakistan deeply value China's just and principled position on the Jammu and Kashmir dispute.
Pakistan-China friendship is rooted deeply in the hearts of the people of the two countries. We have the finest tradition of standing by each other through difficult times. For instance, Pakistan provided support to China during the earthquake in 2008 and China helped Pakistan in the wake of devastating floods in 2010.
In line with this tradition, our cooperation against the COVID-19 pandemic has remained exemplary. In the wake of the outbreak of the pandemic, Pakistan extended diplomatic and material support to China. President Dr. Arif Alvi visited China in March 2020 to express solidarity with our Chinese brothers and sisters. Similarly, China has provided critical material support and COVID-19 vaccines in our fight against the pandemic. This vital Chinese assistance has helped Pakistan fight the pandemic and save precious lives. China's own fight against COVID-19 has set a new standard for the world to emulate. 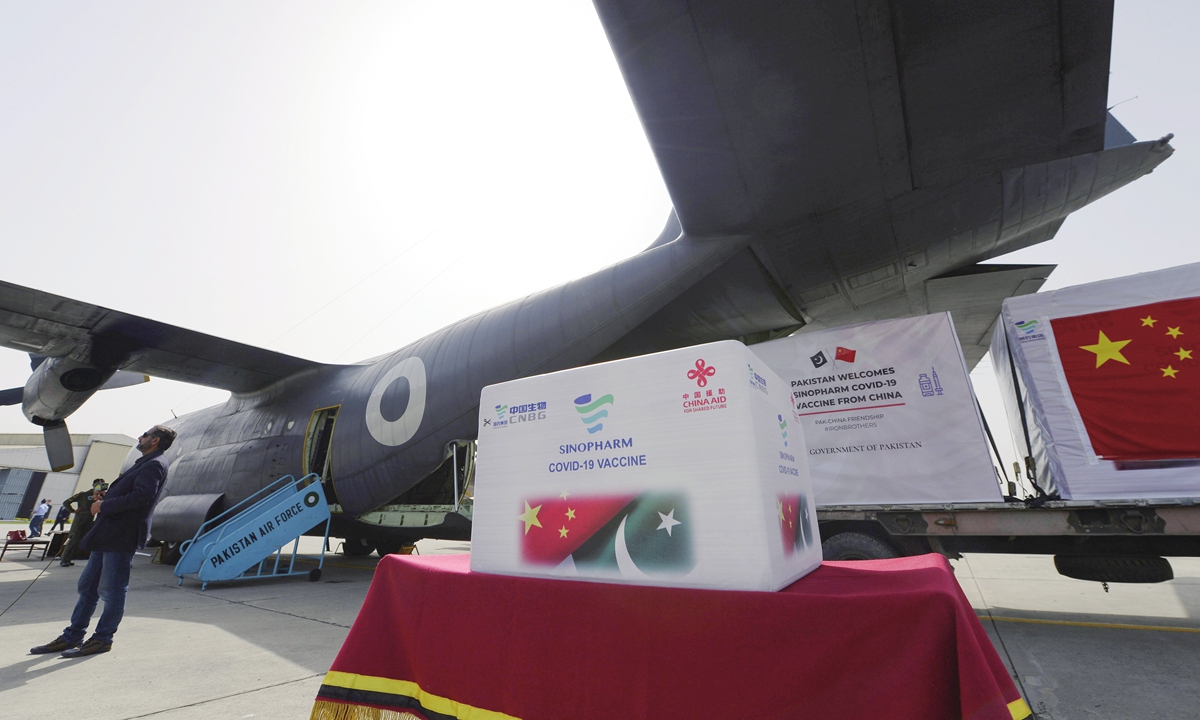 The second batch of COVID-19 vaccines provided by the Chinese government arrive at Islamabad, Pakistan on March 17. Photo: Xinhua

Since 1949, China has made remarkable accomplishments in all walks of human endeavor. After assuming office in 2018, I have visited China three times, which has provided me with a rare insight into the philosophy and strategy behind its rapid economic development. In just 40 years, China is leading global efforts for mitigation of climate change and exploring new frontiers in aviation, space, and medical sciences. China's stellar growth and prosperity provide a model for developing countries for national development and socio-economic progress.
Pakistan is one of the earliest supporters and participants of President Xi Jinping's Belt and Road Initiative (BRI). We emphatically endorse the spirit and philosophy of the BRI, which seeks to transcend national boundaries and lay bridges for a win-win cooperation and closer economic integration for a shared future. As the flagship project of the BRI, the China-Pakistan Economic Corridor (CPEC) complements my government's vision of "Naya Pakistan."
The CPEC is a transformational project. In its first phase, CPEC has helped us in removing major infrastructure bottlenecks and addressing our essential energy needs for unimpeded growth and development. Among 70 early-harvest projects, 46 have been launched or completed with a total investment of $ 25.4 billion creating 70,000 local jobs.
In the second phase of the CPEC, our focus is on industrialization, agricultural cooperation, socio-economic development, and job creation. We have prioritized three Special Economic Zones (SEZs), namely - Dhabeji, Rashakai, and Allama Iqbal. Rashakai SEZ has been launched with the first major investment coming from China. Other SEZs are also being developed in other provinces too. I am confident that with joint efforts, we could realize the Main Line-I (ML-I) project as well.
We are also making rapid progress on the development of Gwadar Port and Free Trade Zone, which would promote regional connectivity and economic integration. 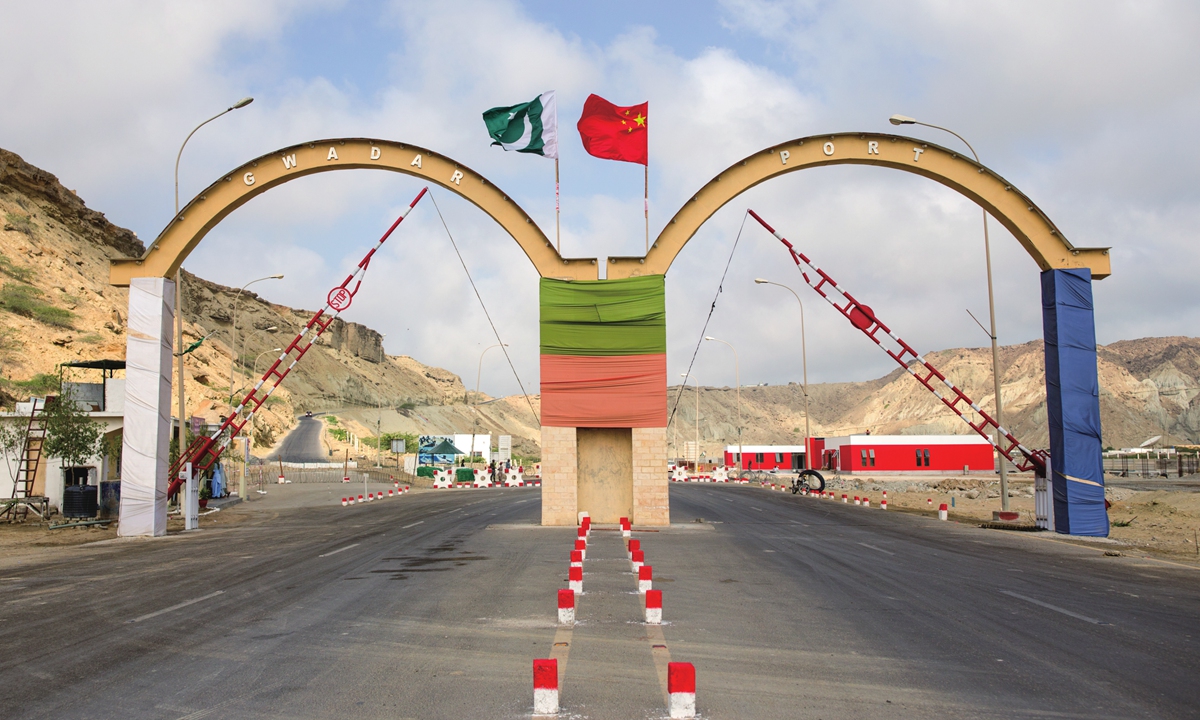 The entrance of Chinese-invested Gwadar Port in Pakistan Photo: cnsphoto

The central pillar of vision of "Naya Pakistan" is geo-economics that seeks to transform Pakistan into an economically vibrant country through development partnerships, connectivity, and regional peace. Pakistan aims to leverage its geo-economic location and burgeoning population of 220 million - as a melting pot and economic hub for positive global interests.
Under this vision, the government of Pakistan started implementing decisive and far-reaching reforms in every sector of the economy. As a result, our economy is moving progressively in a higher, inclusive, and sustainable growth path. Despite the challenge posed by COVID-19, our GDP is projected to grow by 3.94 percent with major contributions from the agricultural, services, and industrial sectors during fiscal year 2020-21. For the first time in 17 years, we have achieved a current account surplus. Pakistan has accumulated a four-year high foreign exchange reserves and additional 29 percent growth in workers' remittances from abroad.
Pakistan endeavors to promote trade, transit, and energy flows as well as people-to-people exchanges between Middle East, Central Asia, South Asia, and China. Our geo-strategic location offers the shortest route to international seas to all Central Asian republics and China through Karachi and Gwadar ports. Pakistan will strive to serve as the gateway to Central Asia, Afghanistan, and China. Pakistan's earnest desire for peace in Afghanistan is also an effort to share the dividends of peace and prosperity for the region and beyond.
Coupled with emphasis on harnessing our potential as the geo-economic hub, we have announced lucrative incentives to attract foreign investment and initiated fiscal and monetary reforms to create an enabling environment for businesses. We welcome Chinese businessmen and entrepreneurs to benefit from our investment-friendly regime and pick Pakistan as a preferred destination for establishing enduring business linkages.
China has become Pakistan's largest FDI contributor as well as largest trading partner. The second phase of the China-Pakistan Free Trade Agreement (CPFTA) which took effect on January 1, 2020 has increased product coverage for trade liberalization. Now nearly 1,000 products enjoy zero tariffs in the respective markets providing further impetus for bilateral trade relations.
No quantum of development is meaningful if the fruits of national wealth do not trickle down to the under-privileged sections of society for equitable growth. Our approach is aimed at combining infrastructure, knowledge, digital, health, and green corridors to make CPEC a "people's corridor of prosperity and progress." My development vision is aimed at rooting out poverty and empowering people to become masters of their own destinies. In this regard, we draw inspiration from China which has lifted 800 million people out of poverty in just four decades.
In pursuit of my people-centered vision of "Naya Pakistan," I look forward to further benefiting from the Chinese experience. During my meetings with President Xi Jinping and Premier Li Keqiang, our two countries reached important consensus to take bilateral relations to unprecedented heights and explore new avenues of cooperation in trade and commerce, investment and people-to-people exchanges. 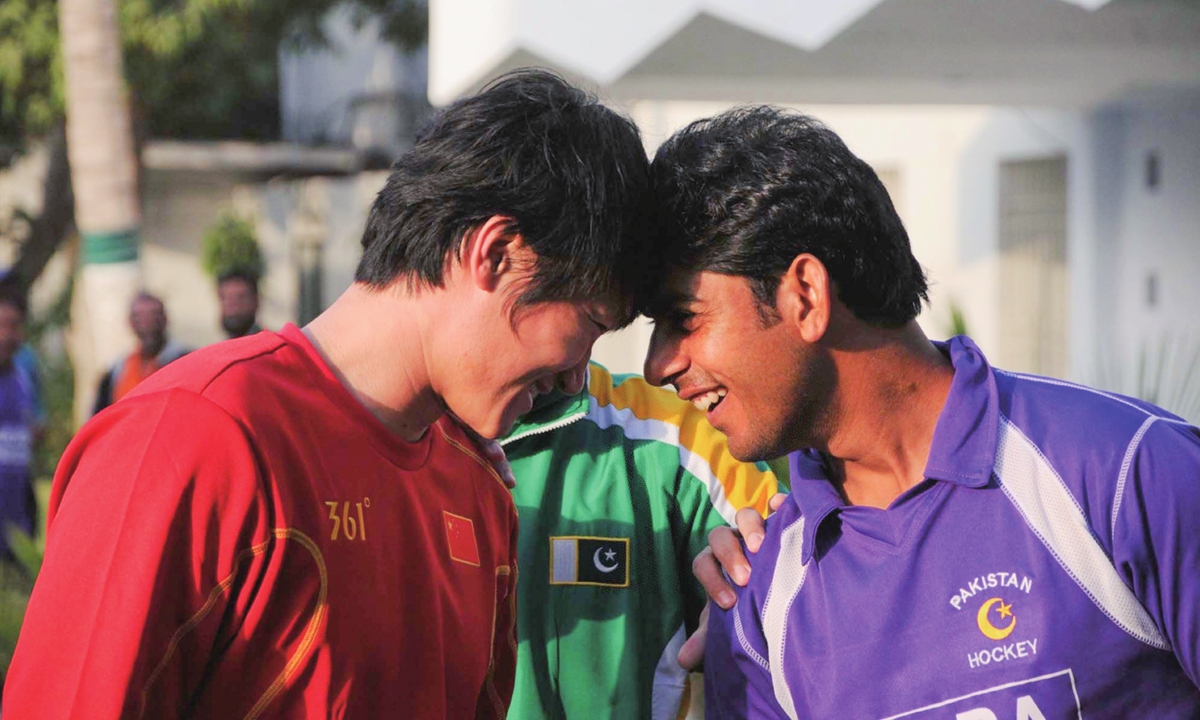 Captains of the Chinese and Pakistani hockey national teams greet each other before a training session in Karachi. Photos: Xinhua

As a responsible state, we strive for peace, prosperity, and development through cooperation and connectivity in the region. With unshakable faith in multilateralism and joint cooperation, we look forward to working with China to wean our region from conflict and instability and help shape an environment, which ensures peace, development, and prosperity. As has been the defining feature of our bilateral ties, Pakistan and China would continue to deepen mutual trust, maintain the momentum of high-level exchanges, and further fortify our unwavering support for each other on the issues of core interest.
The CPC has made immense sacrifices for the Chinese people and for China's peaceful return to the center stage of global politics and economics. The Chinese people are guided by the visionary leadership of President Xi Jinping for achieving the Great Rejuvenation of the Chinese Nation. We earnestly hope that under the inspiring leadership of the Central Committee of the Communist Party of China, with President Xi at its core, China will continue its historic march to achieving its goal of socialist modernization by 2035 and for building a modern, prosperous, beautiful, democratic, culturally advanced, and harmonious socialist country by 2049.
On behalf of the government and people of Pakistan, I would like to reaffirm to our Chinese brothers and sisters that they will always find in Pakistan a most reliable partner, an ironclad brother, and trusted friend who will stand by China, not only amid the gentle tides of peace and prosperity, but also in the rising storms of peril and predicaments. Let us join our hands together to build a Closer China-Pakistan Community of Shared Future in the New Era.
May the sacred flame of the Pakistan-China friendship keep glowing with ever-increasing brightness and splendor!
Long Live Pakistan-China Friendship!