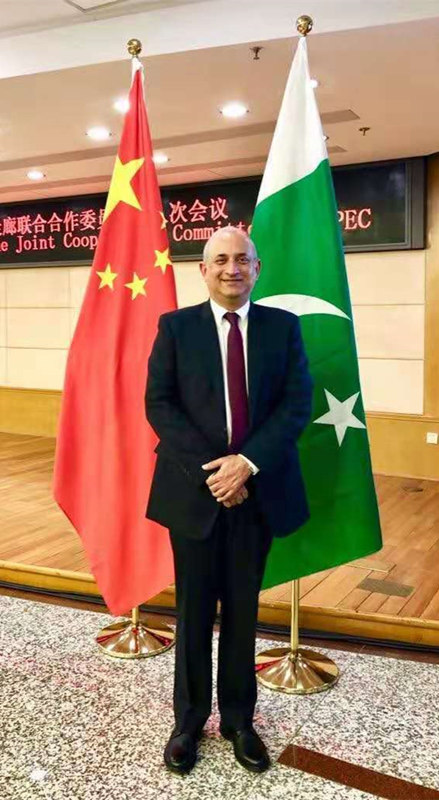 File photo: Haroon Sharif, former Minister of State and Chairman of Board of Investment in Pakistan.

ISLAMABAD, June 30 (China Economic Net) – “I was impressed with the vision of the Communist Party of China (CPC) and its commitment to shared prosperity for all segments of society,” said Haroon Sharif, former Minister of State and Chairman of the Board of Investment in Pakistan.

“I would like to congratulate CPC on its 100th founding anniversary. It is a great journey to be proud of,” said Sharif in a written interview with China Economic Net (CEN).

Sharif pointed out that China has a firm and clear foreign policy position at various global forums while respecting the mandate of global institutions. The consistent message of peace, connectivity and economic prosperity is gaining more and more respect for the Chinese leadership.

He added that under the leadership of CPC, China has emerged as a top economic power in the world. China has put huge investments in health and education, research and technology advancements and never faltered on its commitment to improve the livelihood of the people in the region and in the world.

“China’s focus on poverty reduction is a clear-cut success story and needs to be studied in depth,” said Sharif.

He thought that such a large-scale impact on the lives of the poor was only possible through a model of centralized and coordinated policy framework which has a clear vision to help people get out of poverty trap.

Sharif told CEN that it was a fascinating experience to see the development of physical infrastructure and booming business environment in China.

“It is important for people to pay a visit to China to see and understand various developments that have taken place over the past thirty years,” he said.

“My first exposure to China was in 1990 when I met with several Chinese graduate students at the University of Hawaii, USA. Via these Chinese friends, I learnt about China’s economic reforms being put in place to open up the economy for a sustained growth. Professionally, I have visited Beijing and Wuhan many times as Regional Advisor to the World Bank Group from 2012 onwards,” said Sharif.

“In my opinion, opening up of the market, ensuring meritocracy and investing in people have paid off very well in China. Inclusive growth policies have given people a share in the economic growth and have opened up entrepreneurial and professional opportunities,” Sharif told CEN.

“I also welcome Chinese leaderships’ decision to work on reducing the impact of climate change by promoting environmentally friendly technologies,” he said.