Foreign investment jumps by 63pc in May

KARACHI: The inflows of foreign direct investment (FDI) in May jumped by 63 per cent to $198.3 million compared to $121.4m in the same month last year, the State Bank of Pakistan (SBP) said on Friday.

The increase of about $77m in FDI could be a harbinger of positive change, given that slow growth was observed over the past few years.

According to the latest SBP data, this year April was good compared to the same period in FY20. However, the month of May proved to be even better as the inflows increased by 25.5pc compared to $158m in April, highlighting a positive trend.

The overall inflows during July-May (11MFY21) witnessed a decline of 27.7pc. The country received total FDI worth $1.752bn during the period against an inflow of $2.423bn.

The external front of the economy is presently in a better shape since the current account is in surplus while the SBP reserves are at a four-year high. 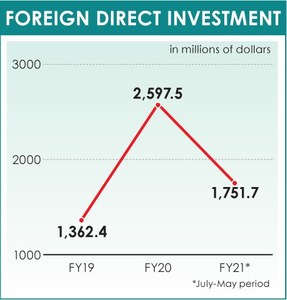 Analysts said the outgoing fiscal year was fully dominated by the uncertainties due to the Covid-19 pandemic which discouraged investors from spending.

During 11MFY21, a major investment of $856m came in the power sector, followed by $227m in the financial business sector and $206m in the oil and gas explorations sector.

The total foreign private investment, which included portfolio investment, noted a decline of 32.8pc during 11MFY21.

The outflow of portfolio investment amounted to $285m compared to $238.5m during the same period in FY20.

Despite low FDI, the country paid $10.6bn as debt servicing during the nine months of the current fiscal year while it maintained foreign exchange reserves at four-year high with the help of record inflow of remittances and some improvement in the exports sector.