BEIJING, June 16 (China Economic Net) - Tamgha-e-imtiaz, one of the highest civil award of Pakistan, was conferred upon Junaid Raza and  Suleman Mahsud in recognition of their outstanding serves in Wuhan during the lockdown in wake of COVID-19 Pandemic last year.

Pakistani Ambassador to China Moin ul Haque on behalf of the President of Pakistan conferred the civil awards.

Addressing the audience Moin ul Haque said that the two unsung heroes of Pakistan played a splendid job by serving the Pakistani community in a difficult situation.

He appreciated the two officers who maintained the close collaboration between city officials, emergency institutions, and the students in different universities of Hebei province, enabling them to go through the challenge when everybody wanted to leave to the city.

“Through their self-sacrifice, the two officers not only showed solidarity with the people of Hubei and back home, but also looked after Pakistani students who were stranded at the time due to lockdown,” Moin added.

Junaid Raza is an officer of the Foreign Service of Pakistan and posted as Second Secretary at the Pakistan Embassy in Beijing, China. He is a lifelong student of Pakistan’s foreign policy and particularly, the exemplary Pakistan-China all-weather strategic cooperative partnership. Following the COVID-19 outbreak centred in the Chinese city of Wuhan, he was part of the core team of the Embassy to provide relief to more than 1200 Pakistani nationals in the locked-down areas.

Suleman Mahsud is currently serving as Education Attache at Pakistan’s Embassy in Beijing. He was a member of the core team constituted to facilitate Pakistani students living under lockdown in several provinces of China. 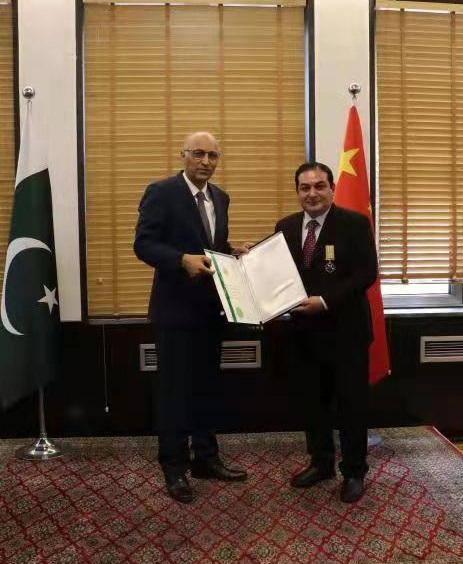 The two officers led a special solidarity mission to the epicentre of the pandemic and spent 53 days in lockdown in Hubei province. They provided support and reassurance to the members of the Pakistani community particularly students during the lockdown.

During their stay in Wuhan, they maintained close contact with the Embassy and concerned Chinese local authorities to provide immediate assistance to Pakistanis in need, thereby renewing the confidence of overseas Pakistanis in the Pakistan government through realizing the policy of according top priority to expatriate countrymen.

Talking to China Economic Net, Junaid Raza expressed happiness over receiving Pakistan’s highest civil award and said he was only thinking to serve the people of Pakistan and express solidarity with Chinese brothers and sisters while in this difficult time in Wuhan.

Muhammad Suleman Mahsud also was very pleased after receiving the award and said he was very satisfied to server his countrymen and to show solidarity with Chinese friends.

Officials of the Ministry of Foreign Affairs, Hubei FAO, China Foreign Affairs University and officers of the Pakistan Embassy were present during the ceremony.