20 years on, SCO sees fruitful journey behind and brighter prospects 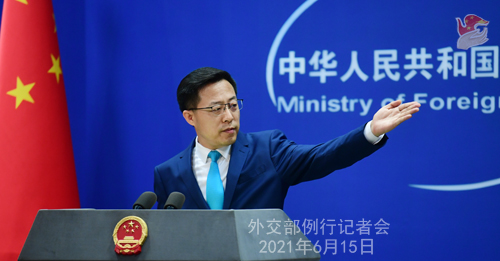 BEIJING, June 16 (China Economic Net）- “Over the past two decades, SCO has navigated the evolving international landscape, successfully blazed a path of cooperation and development under a new type of regional organization, played an important constructive role in promoting regional security, stability, development and prosperity, and made important exploration through practice for the building of a new type of international relations and a community with a shared future for mankind,” Chinese spokesperson Zhao lijian said at a press conference on Tuesday.

He made the remarks in responding to a question about the 20th anniversary of the establishment of SCO, which was just celebrated on June 15. While hinting that a series of events on the topics of state governance, digital economy, traditional medicine, women, education and poverty reduction will be held to commemorate the anniversary, Zhao reviewed the achievements SCO has made in the past two decades:

First, it came up with an up-to-date vision on cooperation. Following the trend for peace and development, it put forward the innovative Shanghai Spirit featuring mutual trust, mutual benefit, equality, consultation, respect for cultural diversity and pursuit of common development and fostered a brand new cooperation model of harmonious co-existence of countries with different social systems and development paths.

Second, it strengthened bilateral relations. Member states of SCO, upholding the principle of no alliance, no confrontation and no targeting any third party, continuously enhanced political mutual trust, good neighborliness and friendship. All sides make full use of venues like the SCO Summit to engage intensively in high-level exchange, conduct close communication and coordination on major international and regional issues, and render each other support on issues concerning respective core interests and major concerns, translating the profound connotation of a shared future through weal and woe into concrete actions.

Third, it safeguarded regional security and stability. Taking security cooperation as a priority, SCO ratified important legal instruments such as the Convention on Combating Terrorism and the Convention on Combating Extremism, stepped up cooperation in such areas as counter-terrorism, counter-narcotics, border defense and information security, held regular joint counter-terrorism exercises, and promoted the peace and reconciliation process in Afghanistan through the SCO-Afghanistan Contact Group, creating a peaceful and stable environment for the development of regional countries.

Fifth, it has set the standard for multilateralism. SCO stands firmly for international equity and justice. It has spoken in a strong voice about defending multilateralism and rejecting unilateralism and protectionism. It has stated its position on enhancing solidarity against the pandemic and rejecting politicization of the virus. It has put forward the SCO solution on the political settlement of regional hotspot issues. It maintains close communication and coordination with observer states and dialogue partners, engages in wide-ranging cooperation with the UN, ASEAN, the Commonwealth of Independent States and other international and regional organizations, and works for a more equitable international order.

Following the press conference, an SCO Day reception was held, where State Councilor and Foreign Minister Wang Yi delivered a video address to review the extraordinary journey of SCO over the past 20 years and envision its bright future.

According to a report of CGTN, Wang defined the two decades with two keywords "unity" and "shared development", saying that the SCO members have supported each other on issues concerning core interests and major concerns and cooperated with each other in fighting against "three evils" and joint construction of the Belt and Road.

SCO should shoulder new responsibilities for global governance, promote genuine multilateralism and uphold the common values of peace, development, fairness, justice, democracy and freedom for all humankind, he added.