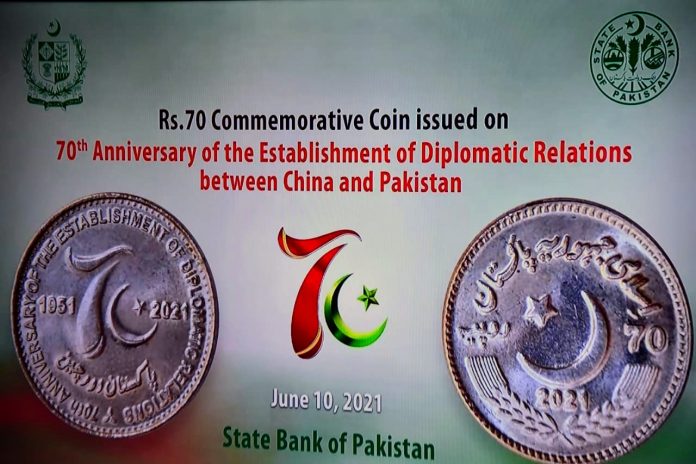 This is the fourth coin issued by the State Bank of Pakistan marking the occasions relating to ties between Pakistan and China.

ISLAMABAD, June 10 (APP): Foreign Minister Shah Mahmood Qureshi on Thursday said the time-tested relationship of Pakistan and China was flourishing with each passing day, unaffected by the vicissitudes of time and changes in the regional and global environment.

In his address at the issuance of commemorative coin in connection with celebrations marking 70 years of establishment of Pak-China diplomatic relations, the foreign minister said unrelenting efforts of the successive generations of people and the leadership of Pakistan and China had transformed the relationship into an ‘All-Weather Strategic Cooperative Partnership.’

The coin’s denomination has been kept at Rs 70, depicting the 70 years of all-weather, time-tested and brotherly relationship between Pakistan and China.

The foreign minister said the relationship of Pakistan and China was unique in the world with the historic ties stretching over the span of millennia.

“Historically, academics, monks, travellers and traders frequently traversed the stretches of Trans-Karakorum tracts and laid the foundation of this fraternal bond,” he said.

Qureshi said Pakistan and China steadfastly supported each other on the issues of core interest.

He mentioned that Pakistan adhered to ‘One-China’ policy and supported China on issues such as Xinjiang, Hong Kong, South China Sea, Taiwan and Tibet.

He said China stood by Pakistan in supporting the key strategic, economic and developmental priorities.

“Maintaining its principled stance, China has unwaveringly supported Pakistan on the Jammu & Kashmir dispute,” he said. 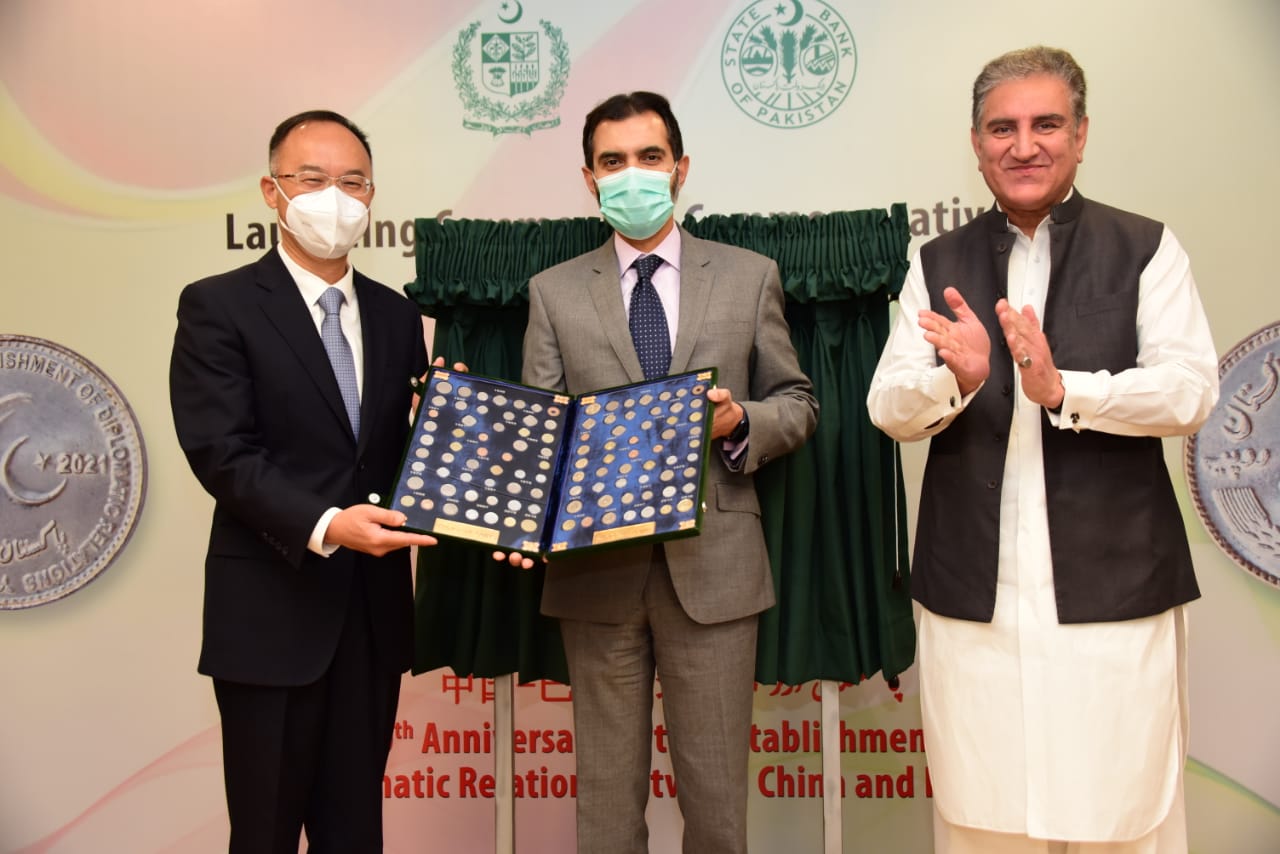 After the successful conclusion of its first phase, he said, CPEC had entered into second phase with focus on industrial cooperation, trade, agriculture and socio-economic development. Ground-breaking of Rashakai Special Economic Zone last month has the potential to spur industrialization and enhance our exportable surplus, he added.

The foreign minister said in the wake of emerging global and regional environment, Pakistan has recalibrated its priorities from geo-politics to geo-economics.

“China-Pakistan Economic Corridor (CPEC), being the flagship project of the Belt and Road Initiative (BRI), complements Pakistan’s renewed efforts of geo-economic shift with emphasis on economic integration and regional connectivity,” he said.

He said for generations, Pakistan and China had had the fine tradition of standing by each other through thick and thin.

After the outbreak of COVID-19 in China and Pakistan, both countries extended material and moral support to each other in their respective efforts to contain the pandemic, he added.

On vaccine, he said the cooperation was also progressing very well as China gifted millions of doses of COVID-19 vaccine to Pakistan. Pakistan is also procuring Chinese vaccine on commercial basis, he added.

“We remain grateful to the Chinese government and people for their steadfast support, which has been instrumental in saving precious lives in Pakistan,” he said.

Qureshi said Pakistan had robust engagement with China in economic and financial sectors. Second phase of China-Pakistan Free Trade Agreement (CPFTA), signed during the Prime Minister’s visit to Beijing in 2019, has been operationalized since 1st January 2020, he added.

He said the second phase of FTA had the potential to enhance Pakistan’s exports to China.

To facilitate financial transactions and arrangements, the he said, Pakistan also had Currency Swap Agreement with China.

He said both countries had robust cooperation in banking sectors as well besides Pakistani commercial banks had started operations in China. The State Bank of Pakistan, he said, as the regulator of the monetary and credit system of Pakistan, had a pivotal role in further deepening this relationship.

Governor SBP Dr. Reza Baqir said it was an honor for State Bank of Pakistan to be part of the tribute being paid by the government of Pakistan by issuing this commemorative coin to celebrate the diplomatic relationship of the two countries.

He said this was the fourth time SBP had issued a commemorative coin relating to Pak-China relations and recalled that earlier coins were issued on founding anniversary of People’s Republic of China, establishment of diplomatic relations between the two countries and on the occasion to mark Pakistan-China Year of Friendship.

Chinese ambassador Nong Rong said both the government and people of China loved their Pakistani brethren and desired to see the country making progress in every sphere of life.

He said both China and Pakistan shared same views on all-important international issues.

The coin shall be issued through the exchange counters of SBP Banking Services Corporation from June 11, 2021.  The coin is in round shape milled with serrations on the edge, diameter of 30.00 mm, weight 13 grams and has Cupro-Nickel metal contents (Copper 75% & Nickel 25%).