ISLAMABAD,June.2(Gwadar Pro) -“As this year’s World Environment Day is soon to be hosted by Pakistan, WWF Pakistan along with the forest department will hold different ceremonies regarding mangroves. We shall inform masses about the importance of mangroves and will prepare the guidelines about how to save and conserve them,” said Dr.Tahir Rasheed, Regional Head, Sindh and Balochistan, WWF-Pakistan. 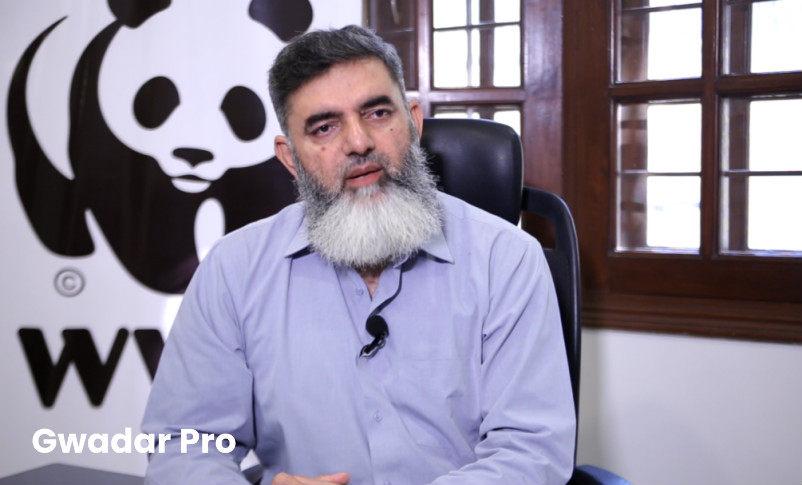 Tahir Rasheed has an interview with Gwadar Pro.  [Photo/Gwadar Pro]

Pakistan is blessed with rich and diverse natural resources, one of which is 0.6 million hectares of mangrove ecosystem mostly in Sindh’s coastal zone. However, now as per estimates, mangroves are on the continuous decline as deforestation takes place at an alarming rate.

According to Tahir Rasheed, once there were eight types of mangroves in Pakistan, but now only four types are left and distributed in different areas. Most of them are Avicennia, which approximately account for 90%, then Rhizophora 8%, and the other species comprise about 2%. Now it is the seventh biggest mangrove forest in Asia and the twelfth largest forest in the world.

With regards to the reduction of mangroves, Tahir Rasheed said that the biggest problem is the lack of water in rivers because less water is released in the Indus River and the water does not flow into the area of mangroves and deltas, which affects their growth.

Tahir Rasheed added that the second biggest problem is pollution, as contaminated and untreated water of city is flowing to seas, and the third reason is the dependence of local people on it. Some locals use mangrove for grazing and burning purposes, resulting in its gradual decrease.

Besides, an increase in urban population and establishing new settlements would be another big issue, Tahir Rasheed mentioned.

Some mangroves are destroyed.  [photo/Gwadar Pro]

As Tahir Rasheed introduced, mangroves in a hectare help in breeding 100 kg fish and 150 kg shrimps. Similarly, these mangroves help in the sequestration of one million to ten million metric tons of carbon dioxide. Mangroves have 4 times more potential to absorb carbon than ordinary forests.

“Mangroves help in stopping tsunamis, cyclones, and storms. If Karachi is hit by a tsunami or cyclone, the whole city may be destroyed if we do not have mangroves. Mangroves are our safeguards, our silent soldiers,” said Kamal Shah, a resident of Coast Belt, Karachi.

Regarding the protection of mangroves, Tahir Rasheed said, “we must release water according to the amount that was given in 1952. Secondly, the banks of rivers of Baluchistan should be closed. Even if the canals are opened for water then a regulated amount of water should be allowed from the rivers in Baluchistan so that maximum water can flow to deltas and aid in the growth of mangroves.”

“Thirdly, we should promote ecotourism. The locals should visit mangroves sights and be educated about the importance of mangroves. The income obtained by this could be spent on locals to improve their livelihood, and their dependency on mangroves could reduce,” he added.

China has done much work on mangroves in recent years, with 52 nature reserves where mangroves are distributed established nationwide. Mangrove areas in China have increased by 7,000 hectares in the last 20 years, making it one of the few countries in the world with a net increase in the mangrove area, according to a report by Chinese media.

“The good thing is that China is collaborating with Pakistan in CPEC projects and there are areas along Gwadar where mangroves trees are planted. Therefore, we can not only work on those mangroves along with China but also for their rehabilitation. With the help of Chinese research, we can improve our marine environment as well,” he said.

WWF Pakistan had played an important role in the conservation of mangroves for three decades. The biggest advancement in this is the engagement of local people, who are working hand in hand with WWF and the forest department so that we can better promote the protection and rehabilitation of mangroves.