CHENGDU, Oct. 26 (China Economic Net) - “Based on our research, at present, if Pakistan wants to develop soybean production, adopting maize-soybean strip intercropping technology would be the best of all viable alternatives, ” said study leader Professor Yang Wenyu of China’s Sichuan Agricultural University in the latest interview with China Economic Net. He also disclosed that Chinese seeds, machinery and herbicides related to this technology have been permitted to be transported to Pakistan.

Pakistan & China share in a victory by boosting soybean production

“Food security is a common issue faced by the whole humanity. China and Pakistan are brotherly friends, and we are both suffering from soybean shortage. We ought to join hands to strengthen bilateral cooperation on soybean production to achieve win-win outcomes, ” Prof. Yang talked about the reason why he introduced this technology to help Pakistan produce soybeans.

China and Pakistan are major importers of soybeans worldwide while China is also a major soybean producer whose experience may provide meaningful insights for Pakistan in crop cultivation.

As the two countries’ capacity of soybean progresses, farmers’ income will be increased and their standard of living will be boosted. Meanwhile, both countries’ soybean imports will be reduced. Furthermore, the two friendly neighbors may export soybeans to each other to improve mutual food security. Along with technology exchanges, both countries’ agricultural modernization will be gradually lifted as well. 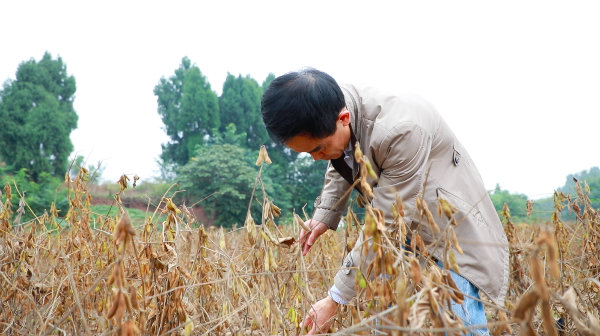 Maize-soybean strip intercropping, the most practical approach for Pakistan to producing soybeans

There is an urgent need for restarting soybean production in Pakistan. Data in this August showed that the contribution rate of animal husbandry to the total agricultural output value in Pakistan is as high as 60%, which needs a large amount of feed made from maize and soybeans. However, the soybean production is Pakistan in recent years is almost negligible. In FY 2018-2019, Pakistan imported about as much as 2 million tons of soybeans from overseas.

“Maize is already a main crop grown on an area of about 1.3 million hectares in Pakistan, and its output can basically meet the domestic demand. Therefore, developing maize-soybean strip intercropping technology to revitalize soybean production becomes ‘ready-made’ for Pakistan as farmers just need to add soybean crops in the current maize fields. ” Prof. Yang said. This technology ensures existing maize production on the same area of land unchanged but brings soybeans as a ‘surprise’, thus ‘killing two birds with one stone’.

Compared with promoting maize-soybean intercropping, developing sole cropping of soybeans is out of touch with Pakistan’s reality. “Sole cropping occupies extra land. Moreover, Pakistan’s high temperature and strong sunlight make it less likely to succeed in sole cultivation of soybeans because that harms soybean’s growth. In the intercropping system, maize can shade and cool soybeans to provide favorable conditions for the growth of soybean to realize high yields, " Prof. Yang analyzed.

This summer, maize-soybean strip intercropping technology achieved promising results both in irrigated and rainfed demonstration plots in Pakistan. Up till now, more than 100 local farmers, 20 professors, and 25 government officials including Punjab Agriculture Minister Syed Hussain Jahania Gardezi have inspected the plots in Pakistan. They all praised the technology that it would have great development potential in Pakistan.

Chinese seeds, machinery and herbicides to arrive in Pakistan

To further raise maize and soybean’s yields in next season, the research team is preparing maize and soybean seeds, machinery and herbicides planters to be transported to Pakistan. “The Chinese Embassy in Pakistan is helping us to get relevant export licenses as well as financial support from the Chinese government,” Prof. Yang expressed his gratitude. By planting seeds from China and improving the implementation of the intercropping technology, soybean yield may reach 1,500 kg to 2,000 kg per hectare.

Next spring, the area of demonstration plots in Pakistan is expected to reach 30 hectares. Prof. Yang's team is making every effort to bring this technology to farmers in more possible places of Pakistan with both governments' support.

“Pakistani students are hard-working. My Pakistani post-doc Muhammad Ali Raza has done a lot to promote this tech in Pakistan. I am willing to offer all the support as always for my students to join in Pak-China agriculture cooperation, ” Prof. Yang said with deep affection for Pakistan and Pakistani students toward the end of the interview.